​Arsenal’s 2-2 draw with Chelsea on Tuesday night was their third consecutive stalemate in the Premier League.

The Gunners have now drawn 12 out of 24 fixtures so far this season, the most of any team in the division. This is a trend Mikel Arteta has not yet been able to buck, with four out of seven of his games drawn.

It seemed after dropping two points​ at home to Sheffield United on Saturday, there was a real need to pick up three points at Stamford Bridge on Tuesday evening. However, as so often is the case with Arsenal, hindsight is an important consideration.

And, last night’s draw was celebrated as a victory, and for good reason.

Said it after Saturday, the next few months for me are all about seeing continuing sign of progress ahead of next season. Have seen it from the moment Arteta arrived and again last night. A big performance and result given the circumstances.

​Arsenal played almost three quarters of the match with one less player following ​David Luiz’s early dismissal. Yet a youthful, inexperienced ten-man Arsenal came from behind twice to snatch a deserved point.

In a way, the nature of performance underlined the huge strides being taken under Arteta’s refreshing new direction. The individuals left on the pitch battled through 70 minutes with a new-found self-belief, determination, and discipline instilled into them by Arsenal’s new head coach. 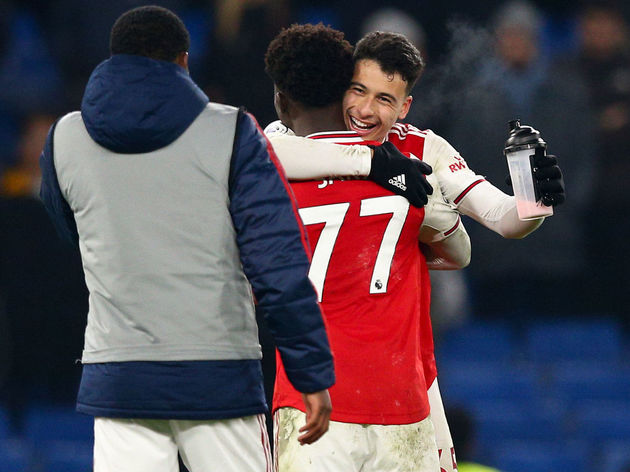 Arsenal may have won just one of their six league fixtures since the change in manager, but what’s evident is the acute difference in the way the team is playing together under Arteta’s tutelage.

Individuals who struggled so dearly for several months under Emery’s management have had their roles clarified, simplified, and are beginning to look like competent, perhaps even laudable footballers again.

Here, 90min are going to discuss the unexpected members of Arsenal’s squad who look to be benefitting the most from Arsenal’s new head coach. ​”I’m not a defender so I do get a lot of stick about my defending being poor,” Maitland-Niles commented in an ​interview with Sky Sports a month into the season. Several days later, he was sent off in the first half against Aston Villa. He did not play a single minute in the Premier League for two and a half months thereafter.

Brought back into the fold by Arteta, the 22-year-old has arguably found the most consistent, and impressive form of his Arsenal career. He has thrived in the ‘inverted full-back’ role – a position Pep Guardiola is credited with perfecting at Bayern Munich with Philip Lahm, and Fabian Delph at ​Manchester City.

Maitland-Niles had, before Hector Bellerin’s return against Chelsea, played the full 90 minutes in each match Arteta has managed. He has played with a confidence of a player who, to put it quite simply, knows what he’s doing.

Onlookers have grown accustomed to seeing him step up into a right-sided central midfielder position alongside Lucas Torreira and Granit Xhaka during games; a shrewd tactic that, along with other reasons, counters Arsenal’s previous vulnerability to the counter-attack transition of their opponents.

It looks as though he has finally received the positional guidance to compliment his impressive underlying physical, and technical abilities. The combative Uruguayan looks to have rediscovered the type of form that had Arsenal fans waxing lyrical during the early months of his time in north London.

Finally, it appeared that Arsenal had landed the defensive midfielder they had been missing for almost a decade. Except, Unai Emery had other ideas. Concerned with his physicality, the former Arsenal head coach never looked completely convinced with Torreira at the base of his midfield.

He often found himself on the bench, and when he did play, Emery attempted to re-invent him as the first line of the counter-press system he attempted for a short period of time. Granit Xhaka was entrusted with the position Torreira likes, and it was clear the role Torreira was being asked to play did not match the skillset he possesses.

Lucas Torreira was given his Arsenal Player of the Month December-award before yesterday’s game against Sheffield United.

However, alongside Xhaka, he has arguably been the standout performer since Arteta’s appointment.

Torreira has been repositioned to his favoured base of the midfield. As a midfield pairing, he and Xhaka’s roles have been tweaked in a way that limits the opponents’ ability to expose their physical weaknesses. Covering smaller spaces, and playing closer together, this then allows each midfielder to benefit from the other’s strengths.

Torreira’s instructions are simple –  he is not expected to cover vast distances, or press high up the pitch. His task is to serve as the team’s defensive screen, winning the ball back in central areas, and distributing it forward. Simple, yet highly effective, this is exactly what Arsenal, and Torreira, need.

After ‘​that’ Crystal Palace incident, the chances of any sort of future at Arsenal​ looked bleak for the shortest-serving captain in the club’s history. Yet, Granit Xhaka’s comeback has been nothing short of remarkable.

With Arteta’s arm firmly around him, Xhaka was told he had a clean slate to work from, and that, if he wanted to, he would be an important player for the team moving forward.

And he has found himself flourishing in Arsenal’s rejigged midfield, playing just in front, and to the left of Lucas Torreira, with ​Mesut Ozil in front of him. No longer is Xhaka asked to do things he is less effective at doing. The team is not set up in a way that exposes his physical limitations. He is not expected to cover large distances, while simultaneously protecting the defence.

Xhaka’s role has been simplified to suit his strengths on the ball. The difference now is the team’s previous weaknesses that were exposed week in, week out, have been minimised. Why? Arteta has set up with a more tactically organised, and positionally disciplined team.

Ordinarily, Xhaka filling in at centre-back to partner Shkodran Mustafi for 70 minutes against Chelsea would worry most supporters. However, he performed superbly, demonstrating commitment, and supreme defensive leadership qualities for a man out of position.

Considering how low Xhaka’s stock was prior to Arteta’s arrival, his upturn in fortune is truly astounding. He is contributing to the team in a way that was previously inconceivable. And it’s hard to look past Arteta’s injection of a fresh, dynamic, and front-footed approach as the principal reason behind such an improvement.