COMMENT: The 25-year-old’s performances have been criticised over the last year but a return to the stage where he made his name could be the perfect chance to revive his form

When Kevin-Prince Boateng clattered into Michael Ballack during the 2010 FA Cup final, ruling the Germany skipper out of that summer’s World Cup, the next generation of stars were forced to step up.

Mesut Ozil emerged as the chief protagonist in a team burgeoning with talent, displaying a level of vision and execution that announced him to fans and prospective suitors alike.

Ozil moved to Real Madrid from Werder Bremen and became a key cog in Jose Mourinho’s team at the Santiago Bernabeu, helping them end Barcelona’s stranglehold on the Liga title in 2012. Yet just a year later, he was allowed to depart for Arsenal, in a move which confounded fans and team-mates alike. What happened?

Ozil has always been something of an enigma, a game-changer, yet criticism has never been too far away.

Though the fans remained fiercely loyal to the playmaker, Carlo Ancelotti and Florentino Perez selected him to be the man to make way for Gareth Bale last summer over Angel Di Maria. The Italian coach explained that he preferred the Argentine’s “character”.

At the Welshman’s unveiling, Madridistas rallied against the president for selling Ozil, but the dye was cast and the 24-year-old was on his way to the Emirates Stadium, where he would be the figurehead of a new era for Arsene Wenger’s side.

His early season performances made him an instant favourite in north London, but a loss of form either side of Christmas, culminating in a slack performance against Bayern Munich – which was capped with a missed penalty – saw him jeered by his own fans. 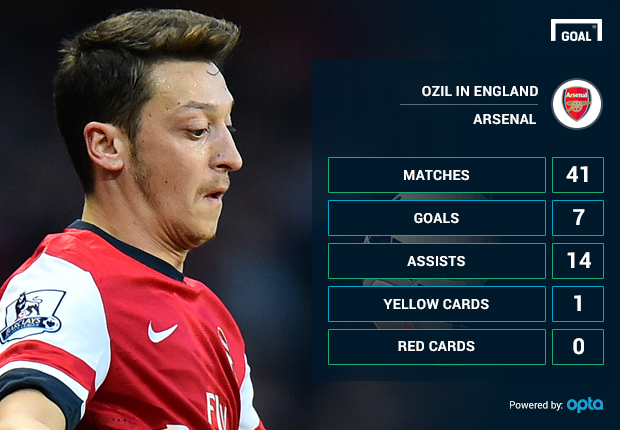 For the most part, his showings for Germany have only increased the confusion. In the four years since he made his name as a 21-year-old in South Africa, he has gone from strength to strength when representing his country.

Injuries have forced Low to chop and change his midfield at every juncture, but regardless of who is behind him, Ozil has shone, whether in his preferred No.10 role or even as an unorthodox striker. Crucially, he also showed his willingness to step up to the plate and shoulder the burden of being the main man.

Throughout qualification for the 2014 World Cup, he relished his role as the team’s star player and only Edin Dzeko and Robin van Persie, who had the advantage of being out and out No.9s, scored more goals than him in the European section.

But even his international performances, so long his strong point, have attracted unwanted attention of late. Jeered during the win against Chile in March and June’s friendly against Cameroon after two lacklustre showings, Ozil finds himself being questioned like never before, though Low was quick to leap to his defence.

“Mesut Ozil has not had his best day,” he said after the 2-2 draw with Cameroon in Monchengladbach. “He needs two more weeks, then we’ll see a strong Mesut at the World Cup.”

Of course, frustrations are all the more likely to be aimed at star players when teams are underperforming. Perhaps, with his career at a crossroads, the World Cup is the best place for him, the very stage where he thrived and cemented his status as one of the game’s brightest talents.

Now, four years on, he is no longer a young gun, but a global star. He will relish Monday’s opening meeting with Portugal, where he will play against many of his former Real Madrid team-mates. The time has come for Mesut Ozil to regain his form. He has the ability, he just needs to show it and silence those doubters once and for all.