England midfielder Jack Wilshere is confident that injured team-mate Alex Oxlade-Chamberlain can play a key role at the World Cup.

Oxlade-Chamberlain’s participation in Brazil was put into serious doubt when he picked up a knee problem during England’s 2-2 friendly draw against Ecuador in Miami on Wednesday.

The attacking midfielder strained ligaments in his knee and initial scans revealed that the 20-year-old would be likely to miss between 10 and 20 days of action.

With the team arriving in Brazil on Sunday, England’s first full training session took place on Monday and Oxlade-Chamberlain was involved, doing numerous running exercises in a bid to be fit for the group stage.

England are in Group D alongside Costa Rica, Uruguay and Italy, and although an appearance against Cesare Prandelli’s men on Saturday looks unlikely, Wilshere is hopeful that Oxlade-Chamberlain can feature later on.

“Alex looks well,” said the 22-year-old. “[On Monday] he was straight-line running five days after getting a meniscus strain.

“It helps [that] he’s young because the body heals [quicker] when you’re younger and what also helps is that he’s got 24-hour treatment.

“Sometimes when you’re back at a club, injuries can take a bit longer to heal because you’re not getting treatment all the time, but here he’s got treatment when he wants it – that was a big part of him staying here. 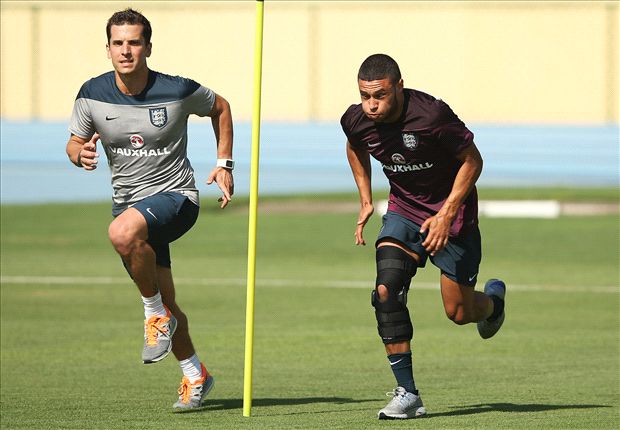 “Hopefully we can get him training over the next few days and get him ready for the tournament. He’s got a great attitude and loves football.

“He had a knee injury at the beginning of the season which was worse than this one and he came back from that well and looked good and I think that was another factor in him staying here.

“We’ve seen him come back before and he’s fresh as well – he’s only played six months so hopefully we can get him back in the next couple of weeks.”

In the build-up to England’s World Cup campaign, there has been much discussion regarding the presence of a significant number of younger players, but Wilshere is adamant that there is a healthy blend of experience and youth.

“We’ve got a great squad – young players, experienced players and a few that are in the middle,” he added.