Arsenal finally ended their nine-game run without a win after coming from behind to beat West Ham and piling misery on Hammers boss Manuel Pellegrini.

Both sides started cautiously, desperate not to make the first error with the stakes so high. It took an awful long time but eventually the game sparked in to life, Angelo Ogbonna’s deflected header wrong-footing Bernd Leno in the Arsenal goal and, despite a lengthy VAR check, sending West Ham in to the lead at half-time.

A crucial second 45 minutes got underway at the London Stadium, with West Ham starting the brighter and chances going begging for Robert Snodgrass and Declan Rice. But against the run of play, Gabriel Martinelli levelled the score after coolly finishing Sead Kolasinac’s fine cross and offering the travelling side hope. Six minutes after Arsenal equalised, they found a second. A moment of brilliance from the much-maligned Pepe, ducking in on his favoured left boot and powering a curler past David Martin. The Ivorian then turned provider when his deflected cross found Pierre-Emerick Aubameyang, who smartly volleyed home and put the game beyond West Ham.

The Hammers couldn’t pull a goal back to set up a nervy finish, seeing Arsenal pick up a crucial three points in desperate times.

​West Ham came in to this game looking over their shoulders, sitting just a point above the relegation zone and in desperate need of an upturn in form. Whether it was tactics, or trepidation, Manuel Pellegrini’s side were more than happy to let Arsenal control possession in the early stages, looking to use the pace and power of Michail Antonio on the counter-attack.

The Hammers took a rather fortuitous lead before the break, stepping up the intensity of their press in the minutes leading up to the goal and preying on their opponents indecisiveness. But, Pellegrini knew his side would need a lot more composure in the second half, with a pivotal 45 minutes still to play. 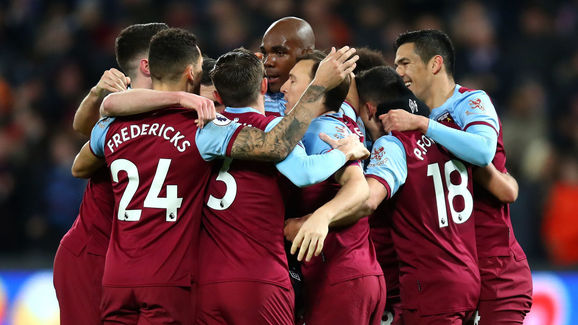 Despite a bright start, West Ham lost their shape after the break and when Arsenal scored, the game soon turned in to a basketball match, which played right in to the hands of the visiting team. Suddenly, their defensive frailties were exposed and Pellegrini inched his way closer to the chopping block, despite a spirited performance. There were very few standout performers for West Ham, who put in a decent, but not great performance. Rice was the best of the bunch, helping break up the play and keep possession for the hosts, recycling the ball with ease. However, it was not a particularly glamorous performance from the defensive-midfielder, or any of those in claret and blue around him.

If Freddie Ljungberg’s first two games have taught him anything, it’s that ​Arsenal are in dire need of improvement. A draw against newly-promoted Norwich and a defeat at home to Brighton means the Gunners are on their worst run without a win since 1977, and in desperate need of a victory.

Ljungberg’s side controlled early proceedings, but looked fairly toothless up front and it was clear to see that confidence wasn’t high. Despite the attacking presence of ​Aubameyang, ​Mesut Ozil and Nicolas Pepe, Arsenal struggled to find their rhythm with little cutting edge to their build-up play. Arsenal were soon punished for their lack of conviction, once again failing to defend a set-piece and leaving the Gunners staring another defeat in the face. A lack of determination, confidence and quality summed up a drab first 45 minutes for the visitors.

It could only get better in the second half, and it did. Despite a sluggish start, Arsenal’s equaliser flipped the game on its head, shifting momentum in Arsenal’s favour. Suddenly they looked interested, and West Ham nerves were set jangling. Two quick-fire goals came shortly afterwards, the Gunners finding their rhythm and never looking back. Despite it being way too early to label this a turning point, the character of their comeback was admirable and will have alleviated a fair amount of pressure at the Emirates. And if they can emulate their second half performance in future games, they have a shot of finding their way out of the corner they have backed themselves in to. With a pretty hefty price tag on his head, Pepe hasn’t had the easiest of beginnings to life in the Premier League. But, despite still giving the ball away a fair amount, the winger started to show the dynamic qualities that made him such a desirable addition to the Arsenal team.

Pepe netted a beautiful second for the visitors and looked the Gunners’ most threatening asset up top.

Pépé has finally arrived man, he’s gotta do this consistently now. His best performance by far this season

Pepe & Ozil been awesome this half

West Ham’s next outing sees them take on struggling ​Southampton next Saturday, while Arsenal face Standard Liege in the Europa League midweek, before taking on current champions ​Manchester City next Sunday.​