Santi Cazorla, Alexis Sanchez and Mesut Ozil’s efforts in the opening 45 minutes ensured there was no way back for the hosts

Alexis Sanchez had a hand in all three goals as Arsenal picked up their first Premier League win of the season with a 3-1 victory away to Watford.

Santi Cazorla scored a penalty after just nine minutes following Nordin Amrabat’s clumsy foul on Sanchez, and the Chilean doubled his side’s lead five minutes before the break with a scuffed finish at the far post.

There was nothing fortuitous about Arsenal’s third, however, as Sanchez curled a delightful cross onto the head of Mesut Ozil, who headed home to mark his first start of the season in style.

Watford were given hope of a comeback early in the second half thanks to debutant Roberto Pereyra’s goal, and Petr Cech pulled off a strong double save to keep out efforts from Jose Holebas and Odion Ighalo.

Ighalo hooked an overhead kick narrowly over the crossbar but it was all too little, too late for Watford, who have now lost seven out of seven Premier League matches against Arsene Wenger’s side.

Watford gifted Arsenal the opener with just nine minutes played and were perhaps fortunate not to be reduced to 10 men in the process. 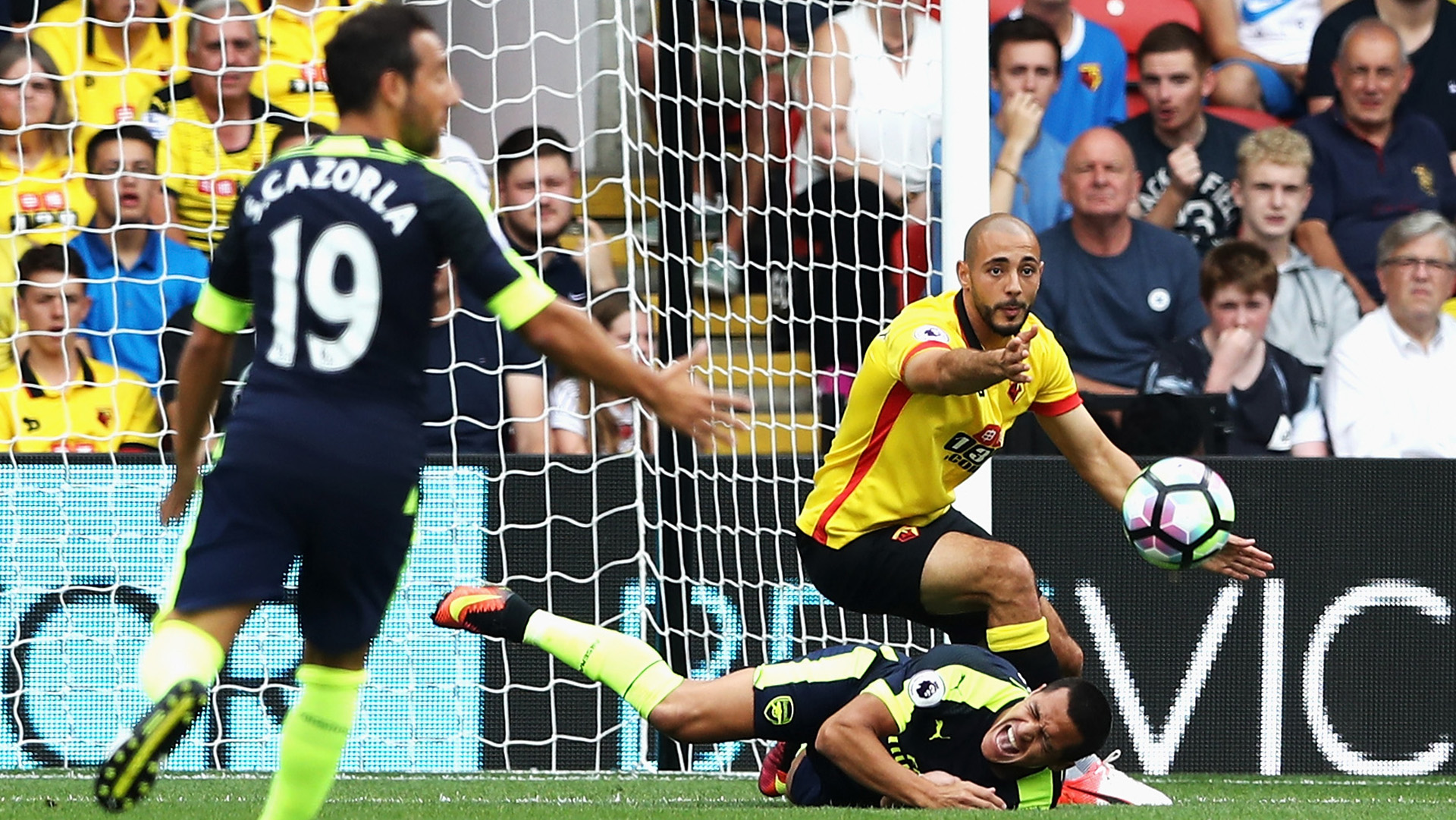 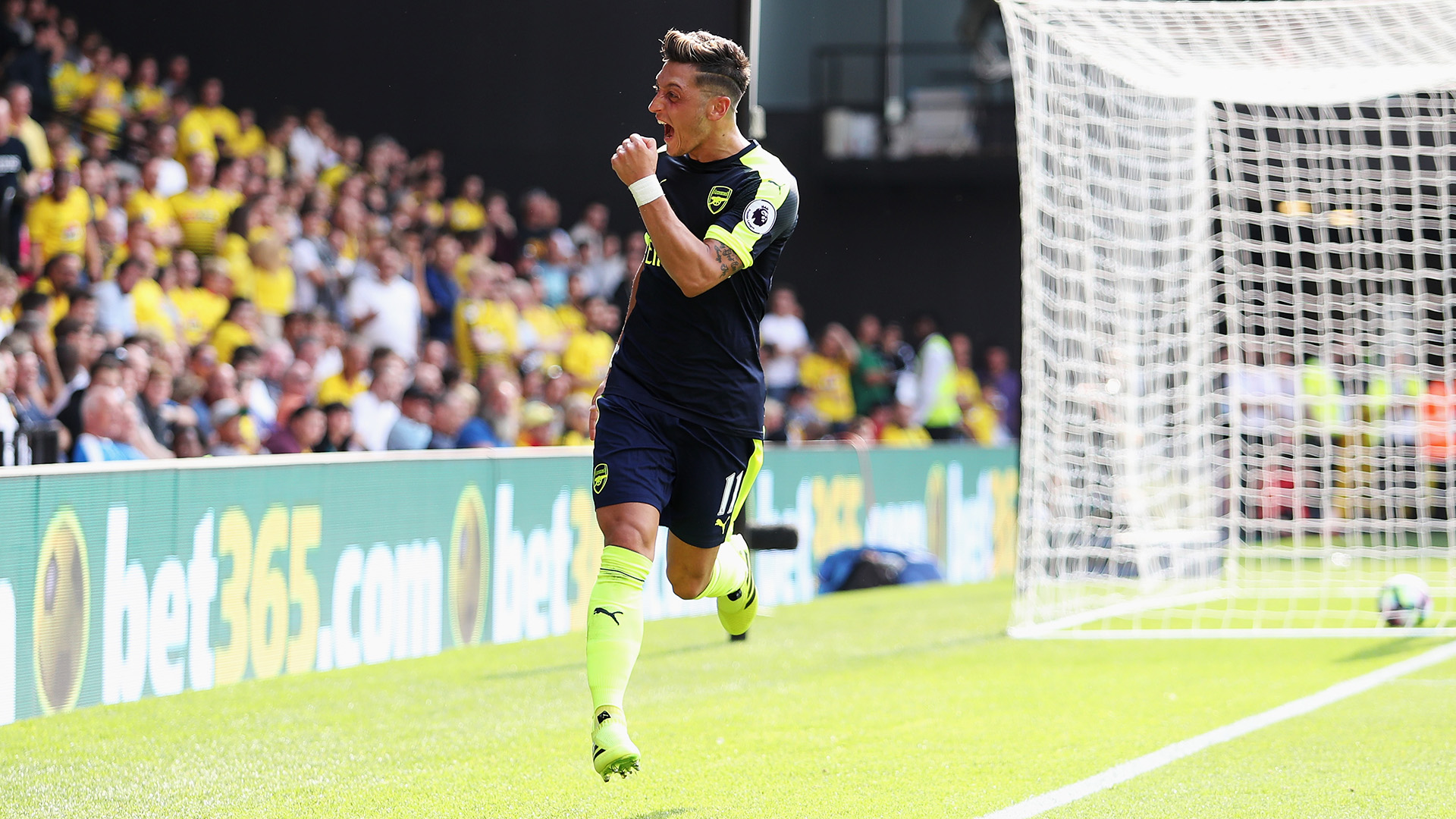 Amrabat caught the back of Sanchez’s head with an elbow as he looked to meet Ozil’s cross, and Cazorla fired straight down the middle of Heurelho Gomes’ goal from the resulting penalty.

Arsenal assumed total control against a deflated Watford and almost doubled their lead on 23 minutes, with Gomes blocking Theo Walcott’s far-post effort with his shins.

Watford began to gain a foothold but struggled to worry Cech in the Arsenal goal, and only a good low stop from Gomes denied Sanchez a second after a fine one-two with Ozil.

But Arsenal’s number seven was not to be denied again five minutes before the break. Walcott crossed from the right and, after Sebastian Prodl inexplicably chose not to clear, Sanchez arrived at the far post to turn the ball over the line despite the Watford defender’s best efforts.

With Watford reeling, the Gunners added a third on the stroke of half-time. Sanchez was granted time to pause in possession on the left and curl a cross towards the penalty spot, where Ozil arrived to head past Gomes.

In search of a lifeline, Walter Mazzarri handed debuts to Pereyra and Daryl Janmaat off the bench, and the former Juventus man needed just 12 minutes to make his mark.

Arsenal failed to clear their lines and, as the ball bounced off Laurent Koscielny, Pereyra pounced to shoot low left-footed past Cech’s right hand from close range.

Watford sensed a comeback was possible and Cech made a terrific double save to deny Holebas and Ighalo, after Alex Oxlade-Chamberlain had wasted an Arsenal counter-attack that saw them bore down on goal with a three-on-one advantage.

Ighalo’s overhead kick flashed over the crossbar after some more uneasy Arsenal defending, but the Gunners held out to move onto four points from their first three games.