There were early warning signs for the visitors, as Vitoria’s Pepe unleashed a thunderous strike from 25  yards that struck the upright and bounced away to safety. Against their energetic and lively opponents, ​Arsenal struggled to get a foothold on proceedings, as Emiliano Martinez was forced into two fine saves before the 20 minute mark. The Gunners’ only efforts on goal came when Rob Holding headed over and Nicolas Pepe sent a free-kick into Row Z in a largely one-sided first half.

As the second period wore on, Vitoria found scoring opportunities harder to come by, as Arsenal were able to find their front players with more speed but still failed to create any chance of note. Despite needing the win the match, Vitoria began to taking their foot off the peddle, with the visitors more than happy to keep hold of the ball and take no risks going forward.

Arsenal finally broke the deadlock with ten minutes to play as Pepe’s inswinging free-kick was headed in by Shkodran Mustafi, in what was the Gunners’ first shot on target in the match. Emery’s side looked set to see the remaining few minutes out, before Duarte’s injury time equaliser earned Vitoria a deserved point. Opting to field three centre-halves with Ainsley Maitland-Niles and Kieran Tierney as wing-backs, initial impressions suggested a defensive approach from Unai Emery. The plan was to suffocate their opponents of the ball, but no amount of possession yielded anything of note. Lacking fluidity and rhythm in their play, the ploy clearly didn’t play off. With Dani Ceballos playing the deepest of the midfielders, it was his job to build play from the back but this new role bestowed upon on him made him look a little confused.

Whatever formation or tactics Emery has his side operating under, the team look lost at sea. Numerous misplaced passes and lack of direction or creativity cost Arsenal both offensively and defensively. Vitoria showed their mettle during the last meeting, and they were significantly the better side with their front three pressuring the Gunners’ defence every time they ventured forward.

It appeared as if Emery’s side were passing for the sake of passing, with no genuine intention of scoring a goal and very content with leaving Portugal with a single point. Despite looking like earning a win, the late goal was deserved. Emery would have been hoping to appease supporters, but the growing unhappiness among Arsenal fans over the supposed style of play and bemusing tactics will not subsidise from this performance.

In fact, it will only intensify.

Arsenal have led in each of their last four games across all competitions:

This, right here, is how you out-pass a team 245-111 and still get out-shot 10-1, which is where it stands at halftime. How is Unai Emery still employed? #VITARS (via @StatsZone) pic.twitter.com/x7yY8MCh93

STAR PLAYER – Nobody shone for Arsenal, with not one outfield player offering anything positive at either end of the pitch to warrant a high score.

That leaves just Emiliano Martínez, whose saves were the saving grace and ensured the Gunners left with what ended up being just a solitary point. 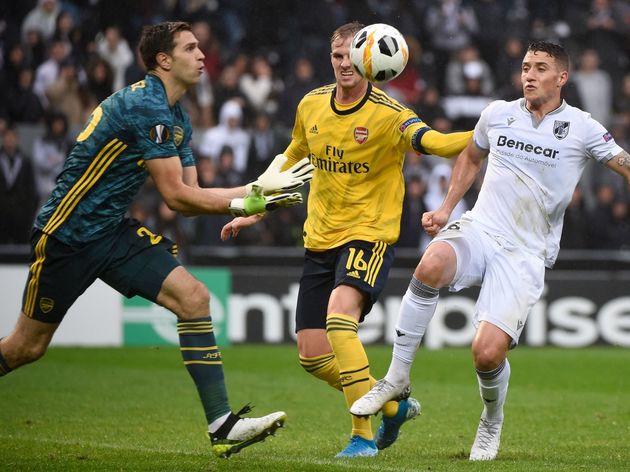 As of now Martinez is our MOM. Sums things up.

It is back to league duty for Vitoria next, as they host mid-table Braga on Sunday evening looking to improve on their current fifth-place spot in Primeira Liga.

The Gunners face another away clash up next, with the daunting prospect of heading to the King Power Stadium on Saturday to take on high-flying ​Leicester in the Premier League.