Arsene Wenger’s sides Asia tour comes to an end tomorrow morning, with our tipster backing the Gunners to finish in style

Arsenal face J-League side Urawa Reds in front of a predicted 60,000 strong crowd to end their summer Asia tour.

Arsene Wenger’s side will be looking to make it four wins in a row, after three impressive performances against an Indonesia Dream Team, Indonesia XI and Nagoya Grampus, with the north London side scoring 17 goals in the process. Urawa Reds are currently in the middle of their domestic season, sitting in fourth position in the league, five points behind the leaders. 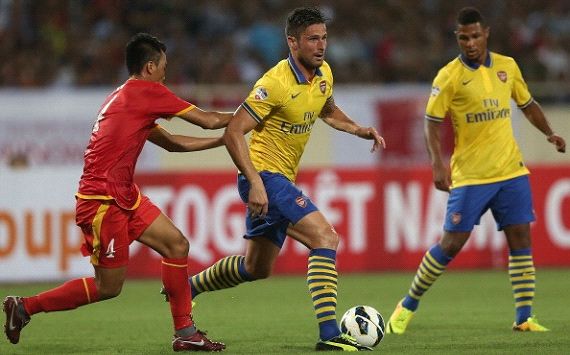 Arsenal come into this match looking to end their tour in style. Goals have not been hard to come by, especially for forward Oliver Giroud, who has been the star of pre-season so far.

Arsene Wenger has taken a strong squad to Asia, and the team in their final match is likely to include many first team players. Bet365 price the Gunners at 2/5 (1.40) to take victory.

Urawa Reds come into this match in poor form. Despite sitting in a decent position in the league, Mihailo Petrovic men have lost their last two matches 4-0 and 3-2 in the league and have only won one match in their last five.

A bet that stands out in this match is Arsenal -1 handicap at 20/21 (1.95). With 2/5 (1.40) a little too short to touch, this bet in the handicap market offers fantastic value. When you consider this bet would have paid out in all three of Arsenal’s games in Asia this summer, it’s certainly worth backing. It’s also worth noting that Urawa Reds cannot stop conceding goals, shipping nine goals in three matches.