However, lying in your bed sobbing while watching the 2003/04 edition of Premier League Years for the sixth time in 24 hours won’t make it come back any faster, we’re afraid.

Instead Arsenal fans, let us use this break to meditate on what has been a frustrating season and try to predict what the future holds for the improving Mikel Arteta and his troops. ​Prior to the enforced stoppage, Arsenal were doing pretty well. Not excellent. Not world changing. Just pretty good. Like a £7.99 bottle of wine…that you definitely wouldn’t find in the Gunners’ hospitality suites.

And therein lies the problem. Arsenal are a proud club with lofty expectations and things just aren’t quite at the level that they need to be this season.

Mikel Arteta’s side are currently ninth in the Premier League table and, although their fortunes have undoubtedly improved since his arrival, they are still a work in progress.

The Gunners lie five points adrift of the ​Champions League places – provided Manchester City’s ban is not overturned – with a game in hand. Before the break, they were on a good run of form, having lost just one of their last ten games – though draws to Burnley, Bournemouth and ​Crystal Palace were frustrating.

If they want to be playing with Europe’s big boys next season they’ll have to qualify domestically, after their Europa League campaign crashed and burned against Olympiacos at the end of last month.

They remain in the FA Cup and, if they can negotiate a tricky quarter final meeting with high-flying Sheffield United, Arteta will be dreaming of lifting his first piece of silverware as Gunners boss. The final will probably be late in the summer at this rate, meaning he will be able to work on his tan. Double whammy. One of the few positives to be taken from this chaos is the fact that Arsenal should have the luxury of a near-fully fit squad when Premier League action resumes.

Calum Chambers, who ruptured his ACL against ​Chelsea in December, remains some way off returning to action, as does Lucas Torreira, who suffered a fractured ankle following a robust challenge against Portsmouth in the FA Cup.

However, fans can rest safe in the knowledge that the much improved Shkodran Mustafi and hard-as-nails left back Sead Kolasinac will both be back in the side.

Cedric Soares, who the Gunners signed in January – despite him being injured – should also make his debut soon enough. ​Right, so there’s ten games left to play and 30 points to play for. What does the future hold for Arsenal?

Well, one thing is for sure: we won’t start to find out until at least April 30 – the earliest return date for the Premier League.

When action does eventually resume, here’s our prediction of how the rest of the campaign will pan out.

Don’t make any plans on Thursday nights for the next six months, Gunners fans. If our predictions are correct, the club is once again destined to be competing in everyone’s least favourite football competition – the Europa League.

We could be wrong though…

By the time ​Liverpool travel to the Emirates Stadium towards the end of the season, the title will have been long since sewn up and Jurgen Klopp’s men might still be feeling a bit hungover.

The Gunners are also capable of beating ​Leicester on their day and if Watford have successfully staved off relegation they may have let their foot off the gas…but with Nigel Pearson as manager, it seems unlikely. 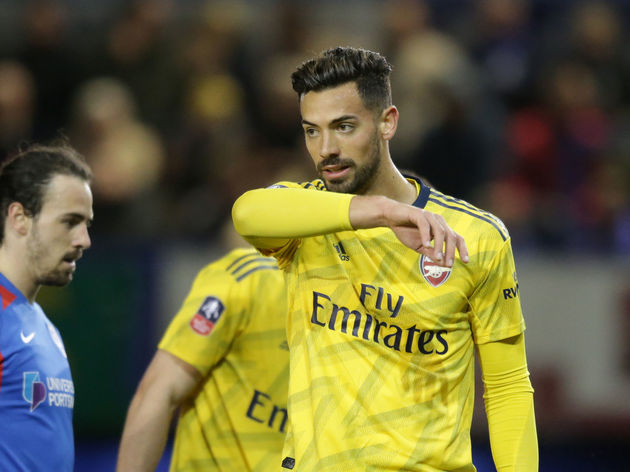 Pablo Mari’s loan deal is due to expire at the end of the season but the centre back – who has only played two games for the Gunners – has placed on record his desire to join the club permanently.

It is less likely that Dani Ceballos will stick around but a move can not be ruled out entirely. It is difficult to see where the Spaniard fits in at his parent club ​Real Madrid, and the 23-year-old admitted that he ​stuck around in January out of loyalty to Arsenal. Sounds promising…

Cedric on a permanent deal? It would be an interesting move, that’s for sure.

Regardless of what happens in the summer, next season is bound to be full of intense contract negotiations as a string of players – including Pierre-Emerick Aubameyang, Bukayo Saka, Mesut Ozil and David Luiz – are all currently on deals that run out in June 2021. It’s going to be carnage and we cannot wait. ​Think of a half decent centre back – not too good mind you. Anyone will do. Got one?

Right, now Google their name. I bet you Missing out on the revenue provided by the competition has crippled Arsenal and the sooner they can return to mixing it with the big boys the better.

They have a talented young manager in Arteta and another target should be sticking with him when times are tough. Belief in the process. That’s the key moving forward.