The Gunners have been unstoppable against inferior sides, boasting a new-found ruthlessness, while Steve Bruce must arrest his team’s poor form without their £15m strikeforce

The tear-soaked desolation that overcame Arsenal’s players upon full-time of their last cup final appearance has become the very visage that has defined their near nine-year trophy drought. Distraught red-shirted bodies were strewn across the Wembley turf, shoulders slumped and heads in hands, as Birmingham City celebrated an unlikely victory.

It felt so typical of the post-Invincibles era Gunners, to throw away a first piece of silverware since Patrick Vieira had buried his spot kick at the Millennium Stadium – and against a side who would go on to be relegated from the Premier League.

But since that forgettable day, Arsene Wenger has made very marked and purposeful changes to the DNA of his squad. In 2011, only three players who took to the field – Tomas Rosicky, Marouane Chamakh and Andrey Arshavin – had tasted title glory, though all with former clubs. It was a young side, too, with Rosicky the only player over 30 in a starting XI with an average age of just 24.9.

By now, just seven of the 18-man squad picked to face Alex McLeish’s plucky underdogs remain at the north London club. The average age of the team expected to start on Saturday is 27.7 and the squad have been injected with pedigree, experience and title-winning know-how.

The German core to the side has brought a degree of a ruthlessness. When previous Arsenal sides might have wilted against Wigan in this year’s semi-final, Per Mertesacker atoned for his earlier error to score the equalising goal. The former Werder Bremen centre-back brings a vocal, authoritative presence that harks back to the likes of Tony Adams and which was absent three years ago, when Johan Djourou started. 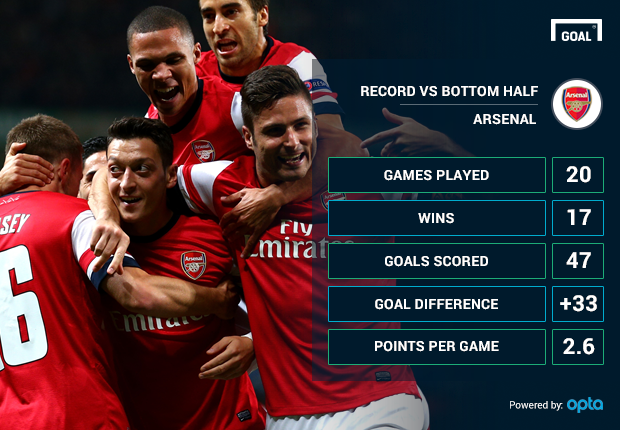 There is a slight hint of flat-track bully syndrome about the Gunners, typified by Lukas Podolski – a player who seems to steamroller lesser opponents with destructive ease – but that is also what makes them such overwhelming favourites against Hull City.

Arsenal have only dropped seven points in the Premier League against sides in the bottom half of the table. While they have averaged just 0.6 points per game against the rest of the top five, they have picked up an astonishing 2.65 points per game against the division’s lesser clubs – the most in the league. The north Londoners’ dominance against minnows is simply unparalleled and, when they are expected to win, they usually do.

Their one and only loss against a bottom-half side came on the opening day of the season, against Aston Villa – a match which now seems a distant memory – while they have recorded a clean sheet in 50 per cent of matches against the bottom 10.

Their title tilt was derailed due to a raft of injuries but those absentees – such as Aaron Ramsey and Mesut Ozil – are already back in action and firing again. The Welshman’s stunning volley against Norwich City suggests that his spell on the sidelines has done little to taper his incredible form.

Hull, however, will be forced to adapt in the absence of key personnel. The January acquisitions of Shane Long and Nikica Jelavic have caused as many problems as they solved. Undoubtedly the pair aided the Tigers’ survival bid – the club, in fact, only lost once in games in which either player had scored or assisted – but it also caused Steve Bruce to seesaw between formations and tactics across competitions.

Bruce has used three at the back frequently in the league this term but never in the FA Cup. Instead he has preferred a simple 4-4-2 – the same formation that was trialled against Arsenal at the KC Stadium in April and which was ruthlessly exposed by the Gunners.

Without the cup-tied Long and Jelavic, there is a tangible lack of bite to the Tigers’ attack. The pair have scored nine of the club’s 16 league goals since joining from West Brom and Everton, respectively. Without them, Hull have lacked goal threat and struggled to fill their void. Together, Yannick Sagbo, Matty Fryatt and Sone Aluko have just five goals in 55 league appearances this term.

Moreover, Hull are in woeful form, with their early-season optimism replaced by a slow and steady slide towards the relegation zone. 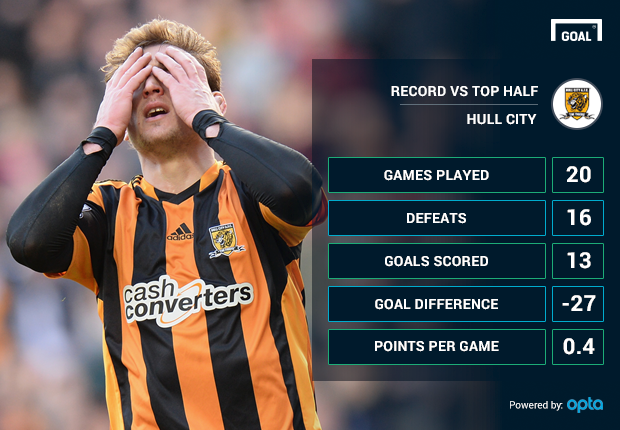 It is often forgotten that Birmingham, though relegated, had been in good form ahead of the Capital One Cup final three years ago – their own decline only truly came after their trophy triumph. The Blues had only lost two of their 11 games (in all competitions) prior to visiting Wembley, one at Old Trafford and the other a semi-final first-leg deficit they then overturned. However, after beating Arsenal, their points per game dropped off by 34.7%.

Hull, on the other hand, have lost four of their last five games – their sole point in that period coming against relegated Fulham. Since December, they have picked up just five league wins in 25 games, against sides with an averaging league placing of 16.4.

In addition to having conceded five goals and scored none over two games against Arsenal this season, they have struggled massively against the big sides. From an available 48 points against the top eight, they picked up just four points, scored just nine goals (and only three on their travels) and ended up with a goal difference of -22.

There is very little to suggest, then, that Hull can cause an upset and beat Arsenal for only the second time in the past 99 years. The Tigers’ roar has been more of a whimper against English football’s more fearsome opposition, and Wenger’s men have been ruthlessly dispatching lesser sides with a terrifying efficiency this season. The stage is well and truly set for the Gunners to end their trophy drought in style.