​Having rested most of his first team in their Europa League clash against Standard Liège, Freddie Ljungberg’s Arsenal host third placed Manchester City on Sunday.

​Arsenal came back from 2-0 down to draw 2-2 with the Belgian club last time out, and that resulted in them finishing top of their Europa League group. They did manage to secure their first win under the interim boss with a 3-1 win at the London Stadium against West Ham prior to that – their first league win in almost two months.

Pep Guardiola, on the other hand, didn’t make many changes for his side’s trip to Croatia. The Citizens beat Dinamo Zagreb 4-1 on their way to securing top spot in their Champions League group. They will want to bounce back from the Manchester derby defeat last time out in the league and try to close the gap on top spot Liverpool.

Here’s the Arsenal team Ljungberg should pick for this huge clash: Bernd Leno (GK) – One of the only consistent players in the Arsenal starting XI this season, the German international has held down the number one shirt ever since he signed from Bayer Leverkusen, effectively. He was one of the several players rested in midweek so should be fresh.

Ainsley Maitland-Niles (RB) – With Hector Bellerin set for another spell on the sidelines after picking up an injury before the West Ham game, the right back position is open. Calum Chambers could also deputise, but Maitland-Niles seems a better fit for the Gunners.

Sokratis (CB) – The Greek defender has never quite settled in the Premier League since signing from Borussia Dortmund and comes in for a lot of criticism at the heart of the Arsenal defence. He and his colleagues will be hoping to keep a red hot Gabriel Jesus quiet throughout the game.

​David Luiz (CB) – One of the most divisive figures in football – but Arsenal’s main option at centre half. £8m seemed to be a bargain for the north London club when he was brought in from rivals Chelsea. Two goals in the league this season, he’s Arsenal’s joint third top scorer​.

Sead Kolasinac (LB) – Kieran Tierney dislocated his shoulder during the win at West Ham so the Bosnian will slot in down the left side at the Emirates. He will want to aid his team in keeping only their third clean sheet this league season. Lucas Torreira (DM) – Seemingly constantly linked with a move back to Italy, Torreira will likely continue in the centre of midfield. Whether or not his future is definitely at the Emirates is yet to be seen but he will be crucial if Arsenal are to win the midfield battle on Sunday.

Matteo Guendouzi (DM) – The young Frenchman will come in for Granit Xhaka, who suffered a concussion against West Ham and is unlikely to pass a fitness test ahead of the City game. One of the Arsenal players that seems to consistently blow very hot and cold.

Mesut Özil (AM) – Criminally under-utilised during the Unai Emery era, the German has started every league game under Ljungberg ​and that is set to continue against City. ​Özil will want to add to his one assist so far this season sitting behind a front three that are hungry for more goals. 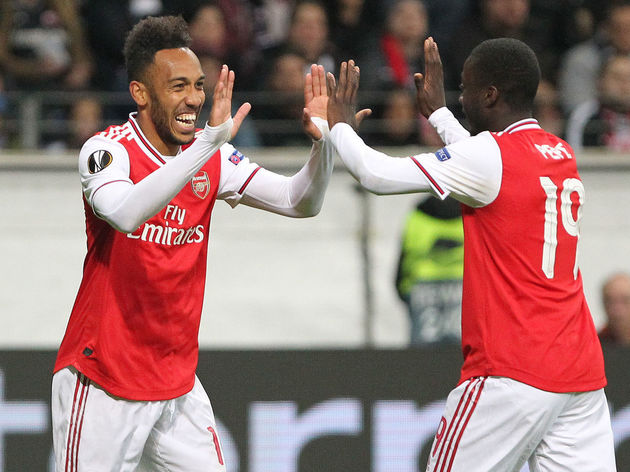 Nicolas Pepe (RW) – Arsenal’s record signing had his best game in an Arsenal shirt during the 2-0 win against West Ham, scoring the second goal in the 3-1 win. He looks a constant threat down the right wing and will want to add to his two league goals, having overcome an injury scare.

Alexandre Lacazette (ST) – The front three for the Gunners has been the most exciting part of their season so far. ​Lacazette often gets dropped for away games and then looks fresh when playing at home. He’ll be interchangeable with the other two and will be a constant menace for a makeshift Man City back four.

Pierre-Emerick Aubameyang (LW) – The main man for Arsenal and their top scorer. He has 11 goals in the ​Premier League so far and is well on his way of producing his best season ever in the red of the Gunners. It will be a fascinating match up between him and City right back Kyle Walker. ​