Arsenal have long been viewed as a club who take pride in developing their young talent, so it should come as no surprise that they have had plenty of youngsters find the back of the net in the Premier League.

In total, eight players under the age of 19 have managed to get themselves on the score sheet in the league for Arsenal, and those eight players have all had incredibly varied experiences of life in England. ​Arsenal’s 2-2 draw with ​Birmingham City in February 2008 is only really memorable because of the downright sickening leg injury which Gunners forward Eduardo suffered, but it was actually the first time Theo Walcott netted a ​Premier League goal.

The winger was 18 years, 11 months and seven days old when he poked home from close range, and he added an impressive second just minutes later.

It was his 30th game for the club, but he finally managed to get his name on the score sheet. During his early years at Arsenal, midfielder Jack Wilshere was seen as certain star of the future. When he netted his first goal in a 4-2 win over ​Aston Villa in November 2010, it only increased the hype.

When he headed home a late effort to secure all three points, Wilshere was 18 years, 10 months ​and 26 days old.

Wilshere’s goal was a positive end to an otherwise tumultuous week for Arsenal, who had fallen to disappointing defeats against both Braga and ​Tottenham earlier in the week. 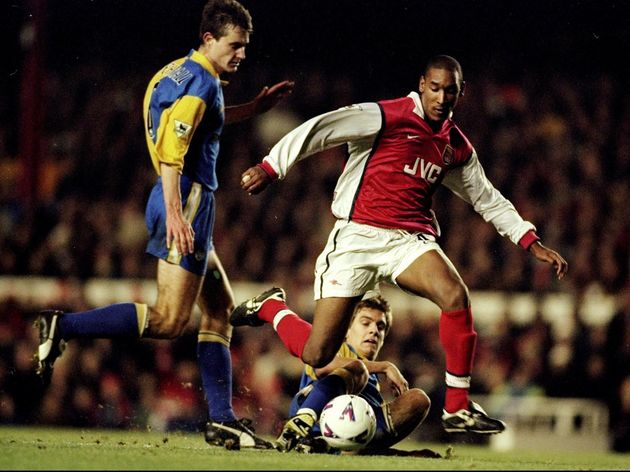 Arsenal lifted the Premier League title in the 1997/98 season as they finished one point ahead of ​Manchester United. So, you could say that the Gunners’ 3-2 win over United in November that year was about as important as you can imagine. In the early weeks of the 2009/10 campaign, Arsenal were in electric form, and young midfielder ​Aaron Ramsey managed to get in on the fun when he scored in a 4-1 win over Portsmouth in August.

The Welshman was 18 years, seven months and 27 days when he netted the goal – a powerful drive from range – and he left fans’ mouths watering over a future with Ramsey in the team.

Ramsey eventually left Arsenal in the summer of 2019, having made a total of 371 appearances for the club. The latest entry on this list, Gabriel Martinelli became the fourth-youngest Premier League scorer in Arsenal history when he netted the equaliser in the recent 3-1 win over ​West Ham.

The young Brazilian, who has been on fire in cup competitions, was handed his first league start at the age of 18 years, five months and 21 days old, and he responded by side-footing a low drive from inside the box around the hour mark.

Thanks to his goal, Martinelli also became the youngest player to ever score for Arsenal on their first Premier League start. Arsenal recorded one of the biggest wins in their history when they mauled ​Blackburn Rovers 7-1 in February 2012. It was memorable for a number of reasons, including ​Alex Oxlade-Chamberlain’s first top-flight goals.

The youngster used his pace to round the goalkeeper and tap home at the age of 18 years, five months and 20 days, and he bagged a second shortly after half time.

Back then, Oxlade-Chamberlain was seen as one of the most exciting young wingers around, but he has since transitioned into more of a central midfielder as the years have passed.​ 2013 was the year ​Serge Gnabry established himself as a future superstar at Arsenal, and it took him just three appearances to net his first goal in the Premier League.​

He was 18 years, two months and 14 days old when he netted in a 2-1 win over ​Swansea City in September 2013, finishing off a delightful team move with a powerful drive from inside the box.

It proved to be his only goal in the competition, but he’s scoring goals for fun with ​Bayern Munich these days. Most of the players on this list are separated by only a matter of days, but Spanish midfielder Cesc​

The youngster was just 17 years, three months and 21 days old when he netted his first Premier League goal in a 3-0 win over Blackburn, which was about as scrappy as they come as