You’re traipsing through the streets of Edinburgh in the pouring rain on a Saturday evening, when you remember Liverpool are playing Watford.

You recall it was 0-0 at half-time, but half an hour or so has passed since. ​Liverpool being Liverpool, you open your football scores app of choice to see how many they’re winning by.

Through your near-water-damaged screen, you can almost decipher that it’s 3-0. Brilliant, another wi-wait surely not? SURELY NOT.

You then spend two hours in shock, watching a band through vacant eyes, trying your best to drown out the internalised assertion that Troy Deeney and Ismaila Sarr can’t have actually ​put Liverpool to the sword. Noise restrictions (since the venue seems to be some strange converted university lecture hall), however, mean the melodies floating down from the stage aren’t loud enough to compete.

You eventually come to terms with reality; David has beaten Goliath, Brock Lesnar has beaten the Undertaker, and ​Watford have beaten Liverpool.

The seemingly endless winning streak is over, but where does it rank in the context of Premier League history? 90min have got you covered. 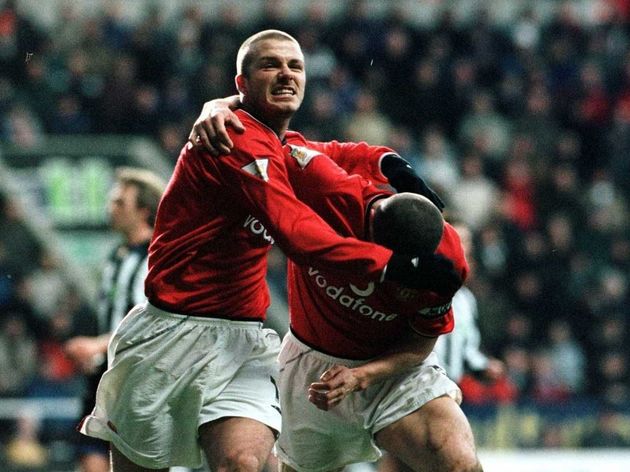 Right, now I’ve got all the superfluous digression out of my system, let’s get into it – starting with Manchester United’s astonishing finish to the 1999/2000 season. At the half-way point of this campaign, United trailed leaders Leeds by a solitary point, and led third-placed Arsenal by three. By the end of it, they’d won the division by a record 18 points.

How did they accomplish that rapid escalation? Simple, by winning their final 11 games, scoring 37 goals in the process as they smashed the Premier League to bits under Sir Alex Ferguson.

They followed it up with a 2-0 win over Newcastle to kick off 2000/01, Ronny Johnsen and Andy Cole scoring the goals, before a 1-1 draw with Ipswich Town brought the relentless run to an end. Antonio Conte’s Chelsea are arguably one of the most under-appreciated Premier League champions ever (perhaps owing to the manager extraordinarily being let go 12 months later after winning the FA Cup), but they were phenomenal during the 2016/17 campaign.

Conte’s switch to a 3-4-3 after a slightly unsteady start proved to be a real difference-maker for the Blues as they would storm to a sixth top-flight title.

A routine 2-0 win away at Hull City didn’t quite seem game-changing at the time, but it kick-started a remarkable run that would see them win every league game until the turn of the year, racking up a commanding lead at the top of the league. Even from Edinburgh, you could practically hear the celebrations from the Emirates, as Liverpool’s defeat to Watford meant the 2003/04 Arsenal team retained their ‘invincible’ distinction. They weren’t the only Gunners side under Wenger worth its salt, however – far from it.

The 2001/02 side, featuring Dennis Bergkamp, Thierry Henry and Patrick Vieira at their very best, went unbeaten from December 23 onwards, dropped just six points from the last 63 available, winning the final 13 as they claimed the title with two games to spare.

Their title defence would prove unsuccessful, opening with a 2-0 win over Birmingham before a 2-2 draw with West Ham spoiled the party. And now we move into the modern era, dominated heavily by the two teams who have set the standard over the last three seasons.

Manchester City had to be at their very best to rein in Liverpool’s once ten-point lead in the 2018/19 season, but there was no luck about it as they completed a stunning turnaround. Pep Guardiola’s charges were unrelenting, as a 2-1 defeat to Newcastle represented their only points dropped in the second half of the season.

They racked up 98 points, which was astonishingly only enough to win the title by one, as they were pushed all the way by… Yep, Jurgen Klopp’s Liverpool, who themselves enjoyed a stunning 2018/19 season. Their 97 point haul is more than any team not named Manchester City has managed in top flight history to date, wasn’t enough to secure their maiden title – though the Champions League was not too bad as consolation prizes go.

They didn’t let the failure to claim the title get them down, however. A rampaging start to the 2019/20 campaign stuttered only with an Adam Lallana-inspired draw at Manchester United, which ended a 17-game winning run. The 2017/18 campaign for City threatened to assert a dominance over English football that would never be broken. It didn’t quite pan out that way, but although Liverpool found several gears to move into and emerged as genuine challengers, the 2017/18 City team still hold multiple Premier League records. Liverpool have smashed records left, right and centre this season, and for their efforts they will have a Premier League title to show for it (​unless coronavirus intervenes).

One record they won’t break in 2019/20, however, is the record for most consecutive wins. They matched City’s 18 between that draw with United and defeat to Watford to open up an unthinkable 22-point lead at the top, but their Vicarage Road humbling means they will have to pick themselves up and go again.