Arsenal kept their bid for Champions League qualification firmly on track as second-half goals from Emile Smith Rowe and Bukayo Saka secured a 2-1 victory against Brentford at the Emirates Stadium.

Mikel Arteta’s side stay sixth in the table, but they move level on points with West Ham, who they have three games in hand on. They are also now one point behind fourth-placed Manchester United, who face Leeds at Elland Road on Super Sunday, and the Gunners have two games in hand on Ralf Rangnick’s side.

Arsenal went in frustrated at half-time after dominating the first half without finding a breakthrough.

Alexandre Lacazette saw an effort ruled out for a narrow offside call as Arsenal had 16 shots – a record for a side in the first half in the Premier League this season – but they only had two on target as the sides went in level at 0-0.

However, any frustrations were short-lived for the Gunners, who took the lead early in the second half as Smith Rowe skipped between two defenders before slotting past Raya and into the bottom corner for his 10th goal of the season in all competitions.

The points were seemingly wrapped up at the Emirates Stadium when Saka finished off a superb Arsenal counter-attack with a strike that hit the inside of the post and went in.

600+ – Arsenal netted their 600th (and 601st) Premier League goals at the Emirates, hitting that milestone in their 297th such game, with only Man Utd at Old Trafford (283) and Man City at the Etihad (290) doing so at a single stadium in fewer games in the competition. Era. pic.twitter.com/4ZLAa6l9ay

Brentford did manage to pull one back right at the end as Christian Norgaard scrambled home. VAR intervened to award the goal after it was originally ruled out by an offside flag, but there was no time for the visitors to grab a point as the Gunners held on for what could prove to be a crucial victory.

Meanwhile, Brentford continue to clip towards the relegation zone. They are 14th but now just six points from the drop zone have played more games than any of the sides around them. 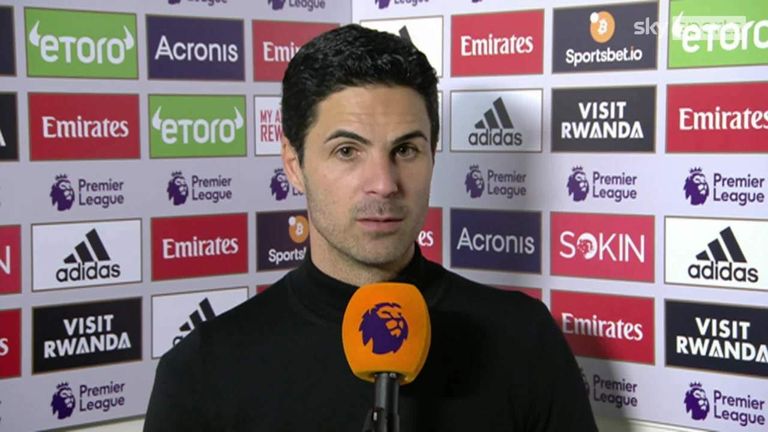 Mikel Arteta believes that Arsenal’s dominance over Brentford deserved a greater scoreline, but admits they need to take more of their chances.

Mikel Arteta refused to get carried away in the race for the Premier League top four after Arsenal beat Brentford.

“There is a long way to go,” he said on Arsenal’s quest to return to Champions League football with a top-four finish.

“But we are a little bit closer today because we won our game. It is what we have to do. You can see with the results how tough it is to win in this league.

“So we need to go on Thursday again, prepare very well, against Wolves it is going to be a really difficult match.

“We need to perform well to win and play better and better and better, that’s the aim. We cannot look too far. Things change very quickly. It’s really difficult to win matches in this league.”

Can Arsenal make the top four?

“They were taking long-range shots and spurned a number of opportunities. They had 79 per cent possession without Raya making any clear-cut saves.

“Can Arsenal make the top four? They are in a great position, they really are, especially with two games in hand on Manchester United in fourth and only being one point behind Ralf Rangnick’s side.

“If they keep performing like this, of course they have chance. They dominated against Brentford and thoroughly deserved the victory.”

At full-time, Status Quo’s hit Rockin all over the World sounded out and it meant one thing, Smith Rowe and Saka had done the business again for Arsenal.

It’s a song that has become synonymous with Arsenal’s season with the Gunners fans fitting the names of Smith Rowe and Saka into the song, and it’s the first time it has been heard at the Emirates after a game. However, it’s not the first time that it has been heard coming from the stands this season, highlighting the importance of both the English youngsters to the Gunners’ campaign.

It was starting to look like a frustrating afternoon for Arsenal as Brentford held firm amid an onslaught from Mikel Arteta’s side. The Gunners had 16 efforts on goal in the first half, but just two on target as their wastefulness threatened to derail their top-four hopes once again.

With the 0-0 draw with Burnley at the end of January still fresh in the mind, the nerves were starting to build at the Emirates Stadium. You could sense the anxiety from the stands as the fans knew how big a game this could be, especially as West Ham dropped points earlier in the day and with Spurs and Man Utd facing Man City and Leeds respectively this weekend.

However, Smith Rowe and Saka stepped up for the Gunners once again, grabbing the goals which ultimately sealed a massive three points.

Saka registered his 11th goal involvement in the Premier League this season (seven goals, four assists), the most of any U21 player and a haul bettered only by Jarrod Bowen (16), Mason Mount (13) and Trent Alexander-Arnold (12) among English players.

Their importance to Arsenal cannot be emphasised any more.

“I understand the supporters love that song [Rockin all over the world].

“Everybody loves that song because they are players that have been raised in our system. I am really happy that we have players that take the responsibility and they manage to win games for us. It is really impressive at that age.”

Frank on Brentford’s troubles: ‘It’s only about us’ 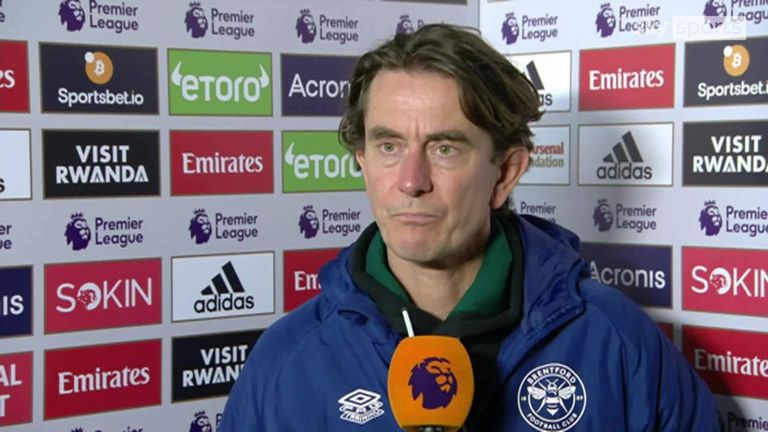 Thomas Frank admits he has no complaints about Arsenal’s win over Brentford, saying the Gunners had the majority of the chances and possession.

Brentford have now won just one of their last 10 league games and, with Newcastle, Watford and Burnley all picking up points below them, head coach Thomas Frank is only keeping eyes on his own side.

“Focus on the next training, the next game, that is the most important thing. We have done that the whole season, it is only about us.

“Every team in the Premier League, if you are in the bottom 10, have spells like this.”

‘Why did Brentford change things…’

It wasn’t game Brentford would have looked at and thought about winning it. I know they beat Arsenal on the opening day, but they are two different sides now.

Arsenal dominated from minute one. At half-time it was 0-0 and Brentford defended for their lives. They had everyone in their own half and they held out.

In the second half, it just seemed like Thomas Frank changed it. Aaron Ramsdale had a goal kick and they pushed up the field. Then the game got stretched and Arsenal started finding pockets of space and that’s what Arsenal wanted.

I was so surprised he changed things. Aaron Ramsdale didn’t have much to do, but in the first half neither did David Raya.

Arsenal return to Premier League action this midweek when they host Wolves on Thursday; kick-off 7.45pm.

Meanwhile, Brentford host Newcastle next Saturday in what will be a crunch fixture at the bottom of the table.