A superb team performance saw ​Sheffield United defeat Arsenal 1-0 at Bramall Lane as the Gunners were left to rue a number of controversial decisions by the officials.

The visitors could not hide their fury when no penalty was forthcoming after Sokratis had been wrestled to the floor at a corner, with VAR ultimately deciding not to overturn the decision for John Egan’s challenge on the Greek centre-back.

Arsenal frustration continued to grow as £72m winger Nicolas Pepe failed to make any meaningful contact from six yards out, having been found by a devilish cross from Bukayo Saka. 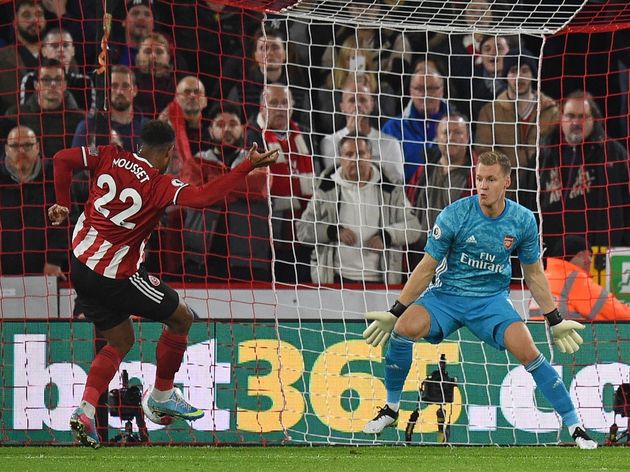 The ​Gunners looked vulnerable in the early stages of the contest and were made to pay for their wayward defensive display on the half-hour, with Lys Mousset stabbing in from point-blank range as he latched on to Jack O’Connell’s towering header at the back post.

Arsenal looked to have earned themselves a spot-kick as Saka tumbled over in the box within minutes of ​United’s opener. However, referee Mike Dean chose to show the teenager a yellow card, before he also booked Unai Emery’s exasperated assistant Freddie Ljungberg for his protests.

In stoppage time at the end of the first half, Granit Xhaka unleashed a venomous volley from outside the area, with home goalkeeper Dean Henderson showing fine athleticism to parry the Swiss’ swerving drive wide of the post. The Gunners gradually began committing bodies forward as the second period wore on, though they unable to carve out any clear-cut opportunities as their opponents held firm.

Chris Wilder’s recruits have been a welcome addition to the first division and they’re all set for a second successive campaign amongst the country’s best. Of course, this isn’t news to those who’ve been keeping an eye on the side’s performances this term. Their showing against the north Londoners was no less than the home crowd would have expected after United’s impressive form in recent months.

There’s no sign of the Blades bandwagon slowing down – could they be targeting a top-half finish come the business end of the season?

Norwood earned promotion from the ​Championship with three different teams – Fulham, Sheffield United and ​Brighton – in the last three seasons, ultimately getting his shot in the top flight under Wilder. On the evidence of Monday – and his previous eight matches – the midfielder would have been a valuable asset at this level for the clubs that let him go.

Dictating play from deep with his marvellous array of passing, Norwood kept the tempo high and regularly found teammates in space. He was like a metronome, spreading the play wonderfully and starting numerous attacks.

Absolutely outstanding from #sufc tonight. Rode their luck at times but fully deserved that, imo. Thought Norwood was superb, breaking up play in midfield, and back 3/5 incredible. And a Frenchman scores the winner against Arsenal again. What a noise at the end #sufc

Mike Dean having a stormer for Sheffield United.

Arsenal may be justified in feeling aggrieved with Dean’s decisions on Monday night, but that doesn’t mean they deserved a result at Bramall Lane. Emery’s men need to focus on their own shortcomings, which were on full display in Yorkshire.

As has been the case for the entirety of 2019/20, the Gunners’ backline was not up to the required standard. ​Premier League Saka was industrious at Bramall Lane and looked like Arsenal’s best avenue of attack, suggesting he has a big future in Emery’s first-team.

The 18-year-old should have collected an assist in the opening minutes of the contest, but Pepe’s atrocious attempt at finishing denied him that. On top of that, replays indicate the referee was wrong to book the Gunners academy graduate; that’s two crucial moments which – if they’d gone the other way – could have made Saka the hero for his side.

63% of the ball. Attack after attack. No final ball. 3 shots on target.

Has Mesut Özil declined in recent years? Yes. However, if you’re trying to convince me that he isn’t even worthy of a place on the bench in this current Arsenal set-up then you’re only lying to yourself.

4 – Arsenal have lost four of their last seven Premier League away games against newly-promoted sides (W3), as many defeats as in their previous 49 (W33 D12 L4). Neophyte. pic.twitter.com/o9kyWOlLcE

Just another away day so far 🤬

The Blades travel to east London for a meeting with ​West Ham United on Saturday. Exactly one week after that encounter, they’re back at Bramall Lane to do battle with ​Burnley.