The defender could undertake a medical on Monday after deciding to leave Arsenal, with both parties keen to tie up a deal before he joins up with the France squad

Bacary Sagna has travelled to Manchester to open formal talks on Monday with Manchester City, Goal can reveal.

The right-back was officially approached by the Premier League champions on Sunday, the same day on which he paraded Arsenal’s FA Cup trophy in the streets of Islington.

Both parties are confident of tying up a deal in the coming days before Sagna joins up with the France squad at the end of the week as they begin their World Cup preparations.

Barring any last-minute hitch in negotiations, the defender could agree a three-year contract with Manuel Pellegrini’s team and even undertake a medical with the club by Tuesday.

Goal revealed on Thursday that Sagna would commence formal negotiations with City this week. 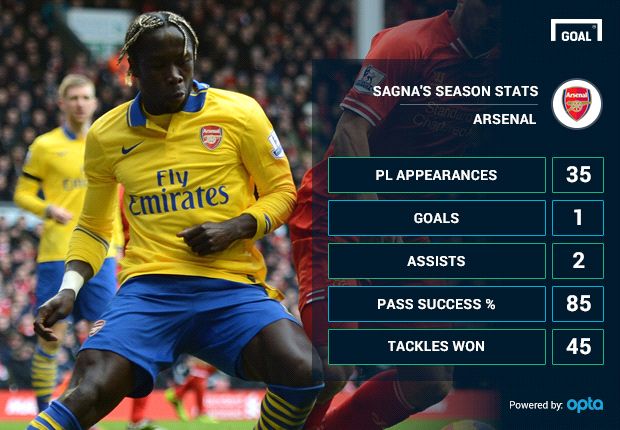 The Frenchman told Arsenal at the end of their Premier League campaign that he would not sign a new contract and that the FA Cup final against Hull City would be his final game for the Gunners.

Sagna has attracted strong interest from the Premier League’s big hitters, with reports on Monday suggesting that Manchester United had joined the race late on, as well as clubs on the continent but the offer on the table from City is expected to prove too lucrative to turn down.

He will take advantage of his free-transfer status by clinching a £100,000-per-week deal supplemented by a sizeable signing-on fee.

He has been targeted by Pellegrini even though his premier position at right-back is the same as that of Pablo Zabaleta, one of City’s best players this season.

Arsenal had been close to an agreement with Sagna in April after offering him an £80,000-a-week, two-year deal with the option of a third year in a final attempt to keep him at the club. However, the 31-year-old has rejected the offer and the end of his seven-year spell at the Emirates Stadium is set to be officially confirmed this week.

Losing Sagna is be a blow to Arsene Wenger, with the player offering experience and versatility that is not easy to replace.

Toulouse’s Serge Aurier is currently top of Arsenal’s target list to replace Sagna. Goal revealed on May 13 that the Gunners have opened preliminary talks with the Ligue 1 club about a £7 million summer move for the 21-year-old Ivory Coast international.

Sagna, who turned 31 in February, is able to officially join another club on a free transfer on July 1.