It’s a new year in the Premier League, and the fireworks were not reserved for the displays and the garden parties this time around.

England’s top flight invited in the bells with another remarkable round of fixtures, and left us, as ever, with plenty to unpack and discuss.

With 25 goals across the 10 games, it certainly wasn’t an easy couple of days to condense into seven highlights – but we’ve done it anyway, so have a look.

James Maddison’s first-half effort would have been a worthy winner any other week, but substitute Choudhury’s pristine strike into the top corner from all of 25 yards as the Foxes closed in on victory will live long in the memory for the 22-year-old.

It was his first professional goal, and unfortunately for Choudhury, it’s only downhill from here.

Look at this offside in the Aston Villa vs Burnley game.

VAR is getting completely ridiculous, there has to be some kind of minimum distance offside for it to work. How can anyone tell if Wesley’s foot is ahead there?! pic.twitter.com/oXeY2Ljvo5

Anyway, the latest big decision to be swung by the video assistant came in Aston Villa’s ​2-1 victory at Burnley, as Jack Grealish’s header was ruled out due to Wesley’s stud being offside…in an earlier phase of play. Because that’s what it’s there for.

Manchester United loanee Dean Henderson was always going to be a busy man upon his visit to Anfield with Sheffield United, but were it not for the 22-year-old, what was ultimately an ​emphatic 2-0 defeat

The pick of Henderson’s range of saves came in the first half, as Mohamed Salah, having already scored once, stole a yard on John Egan and directed Jordan Henderson’s cross goalward.

The Egyptian’s wild right-footed volley looked destined for the top corner, but even with virtually no time to react, Henderson was able to launch himself to his left to tip the effort over the bar and keep the score at one. 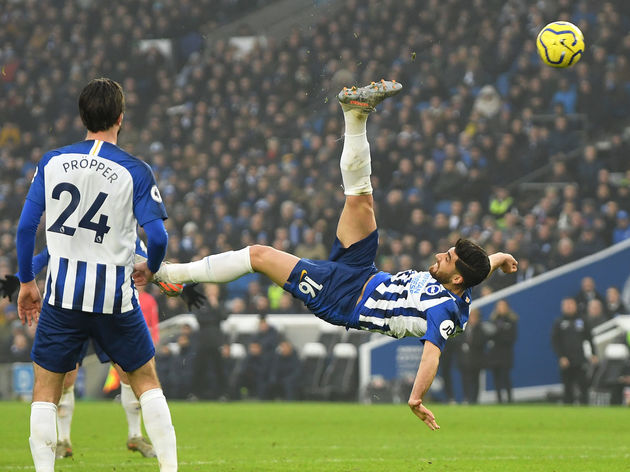 It’s been a difficult 18 months for Alireza Jahanbakhsh since his £17m move from AZ Alkmaar. Once the Eredivisie’s leading scorer, he went the entirety of last season without scoring for Brighton, and with Graham Potter seemingly not fancying him since taking over, it had begun to look as if his time in England was already up.

He has been given a chance lately, however, and boy has he taken it. He netted the opening goal against Bournemouth at the weekend, and emerged from the bench to rescue his side a point against Chelsea.

This, however, was no ordinary equaliser. The Iranian came up trumps with a spectacular Rooney-esque overhead kick five minutes from time, leaving Kepa rooted to his line, as he showed in devastatingly clear terms what he can still bring to the side.

Special mention to Sebastian Haller on this one, whose effort against Bournemouth is also worth a look. And that smoothly segues us into the Irons’ 4-0 win over Bournemouth, which was ultimately won by half-time as Haller’s spectacular effort split a deflected strike and a penalty from Mark Noble to put David Moyes’ men well in charge.

But if that wasn’t enough to win the game, then it was well and truly put to bed when Felipe Anderson ran onto a sensational long-range pass from Declan Rice and raced through to score a fourth.

Creativity isn’t something we typically associate with Rice – but if it’s something we’ll be seeing more of under Moyes, then the Hammers fans won’t exactly be complaining. From one new manager to another, Mikel Arteta’s Arsenal bossed Manchester United from start to finish when the two sides met at the Emirates, and while there were a more than a few stellar individual performances from a Gunners perspective, there was one man running the show.

Nicolas Pepé has taken his sweet time to adjust to life in the Premier League, but Luke Shaw is likely to have nightmares about him for most of 2020.

The Ivorian drifted inside to sweep home the opening goal, and was a live-wire throughout, rattling the post and coming within a dreadful Alexandre Lacazette finish of registering an assist before half-time struck. He was subbed off on the hour mark, but it was a performance much, much more like what Arsenal fans expect of their record signing.

Best Career-Ending Dink Over a Defender​

Toby Alderweireld looked to be in relative control of the situation as Jack Stephens fired a well-weighted ball over the top, but it all changed in an instant as Ings took one look at the centre-back, committed him, and dinked it over his poor, despairing head to leave himself one-on-one with Paulo Gazzaniga.

And as if that wasn’t enough, he finished it off with a clinical left-footed finish into the corner.