The first weekend of the Premier League is over and done with. Football is back, betting slips are in the bin and multiple fantasy teams up and down the country have already been wildcarded. Normality is restored.

In all seriousness, though, the opening fixtures have proved as exciting as ever. 27 goals were scored across all 10 games and of course, there were some spectacular standout performances to take note of.

If you were one of the many people that had an absolute nightmare start to your 2019/20 ​Fantasy Premier League season, this list may well give you a few names that you may want to start transferring in sooner rather than later.

Here’s a rundown of every man-of-the-match performance from the ​Premier League’s opening weekend.

The ever consistent ​Roberto Firmino proved once again that he was much more than just a striker in Liverpool’s convincing opening day victory.

​The Reds just aren’t the same side without the Brazillian forward in the squad. His interlinking play and his work rate are second to none and he once again showed that by providing the assist for the important second goal of the game.

Firmino should have bagged a goal himself and increased his fantasy points tally after a poor miss in the second half, though he can be forgiven following his excellent overall performance.

Who else but this man? ​Raheem Sterling started the season just as he finished the last with another emphatic performance, in which he bagged himself another match ball for his ever-growing collection.

Sterling, if he hasn’t already, is cementing himself as one of the best wingers in the world and I hate to say I told you so before the season began, but……​I told you so. Not the perfect start to the campaign for ​Bournemouth in terms of the result but it was certainly a near perfect start for new man Philip Billing.

Billing joined Eddie Howe’s men from Huddersfield Town following their relegation to the ​Championship and hardly put a foot wrong on his debut.

Still available for only £5.0m, there would be worse shouts to throw in your squad for game-week two.

​Burnley swept aside ​Southampton in their opening fixture in what was certainly one of the results of the weekend.

Ashley Barnes bagged a brace to help himself to the man of the match award and the Clarets to a convincing victory. Barnes’ excellent double cemented his place at the top of the forwards leaderboard for gameweek one, and he could well be a threat throughout the season.

​Crystal Palace and ​Everton played out one of two goalless fixtures from match day one so it was unsurprising to see a goalkeeper pick up the man of the match award in this.

England’s number one ​Jordan Pickford pulled off multiple excellent stops to keep Palace at bay, especially when the Toffees had gone down to 10-men with 15 minutes to go. Those stops were vital and sent his team home with a decent point.

After being named captain of his boyhood club, Lewis Dunk put in the captain of all captain’s performances at Vicarage Road.

An assist and a clean sheet in a game in which they were strong second favourites made Dunk a worthy man of the match. Available at a measly £4.5m, I’m sure many will be dunking (get it) the ​Brighton defender into their team for next week.

That one season wonder ​Harry Kane is at it again.

Another season, another two goals.

I’ve got nothing left to say other than – if you haven’t got him in your team why on earth not? 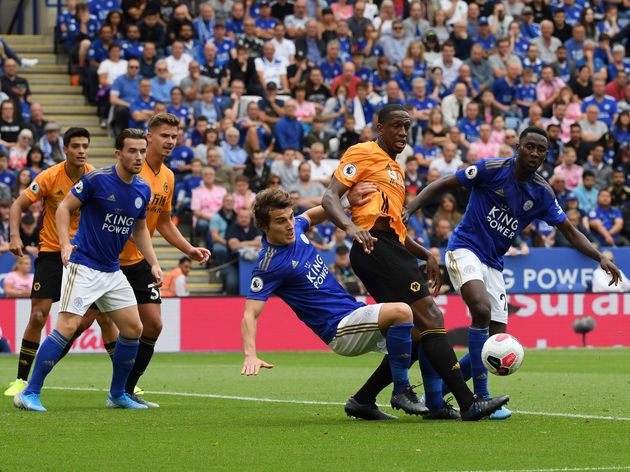 Willy Boly is an absolute beast and it is clear to see why he has been judged as one of the best defenders outside of the top four.

Funnily enough, ​Wolves would have won this game if it hadn’t been for a goal they had disallowed – thanks to a handball in the build up to the eventual finish by, ironically, Boly.

Forgetting that though, the man is a brick wall and was worthy of his man of the match performance. A FPL players’ dream.

Certainly not everyone’s first choice defender when it came to picking their FPL squads but Ainsley Maitland-Niles most definitely did everything he could to show that he should have been.

A stunning performance in which he did his job at both ends. Clean sheet, check. Assist for winning goal, check.

After weathering a bit of a first half storm, United rolled ​the Blues over in the second half with a little help from the young Englishman.

A calmly converted penalty followed by a well taken goal and an all round five-star performance can only bode well for both the Red Devils and England going forward. Maybe more importantly, though, it bodes well for the FPL users that kept the faith in the respectably priced £8.5m forward.

Side note: Seven of the 10 man of the match awards this weekend went to England internationals. Mental! It is fully coming home, lads.