​It has been a pretty miserable season for Arsenal so far.

Languishing in mid-table and enduring their worst start to a top flight season since 1977, there is little to suggest their form can be overturned any time soon.

Tasked with being the club’s saviour, suddenly the new head coach – despite not having a single drop of experience in the role – has shone a more positive light in north London.

Insisting he will be ‘ruthless’ in his new position, it is hoped that his appointment will provide the necessary kick up the backside to a group of players who have been less than inspiring so far this season.

First up on his agenda is an away trip to Bournemouth on Boxing Day, and it will be intriguing to see how Arteta lines up his​Arsenal Bernd Leno (GK) – There isn’t really any debate here whatsoever. There is no dislodging Leno from the starting XI, with the German’s shot-stopping ability backed up by the fact he has made more saves than any other keeper in the division so far this season. He’s the first name on the teamsheet. No doubt about it.

Hector Bellerin (RB) – Provides more attacking threat and experience than Ainsley Maitland-Niles, who could be dropped in favour of the Spaniard after Bellerin returned to training this week. Arteta insists he wants to ‘attack’ with his new side, so the full-back’s pace in wide areas could be beneficial.

Sokratis (CB) – Calum Chambers suspended, but fear not Arsenal fans, as Sokratis is available again after serving a ban of his own! He’s been pretty terrible this season, but who knows, maybe he’ll come up trumps against the Cherries.

David Luiz (CB) – Despite some criticism, Luiz has become a regular fixture this season, with his leadership qualities one of the key components of his game that earn him get the nod over other options.

Bukayo Saka (LB) – Sead Kolasinac and Kieran Tierney are set for unfortunately long spells on the sidelines, so youngster Saka will be thrust into this unfamiliar role once more. He wasn’t overly tested against the Toffees, so Eddie Howe may attempt to attack the Gunners’ left hand side at Dean Court. Lucas Torreira (CM) – Concerns have arisen over Torreira’s commitment in north London, with the Uruguayan continuously linked with a January move away from the Emirates. However, alongside Granit Xhaka at Goodison Park he looked more solid than in recent matches, with Freddie Ljungberg opting for defensive solidity as opposed to attacking intent.

Granit Xhaka (CM) – Another player linked with a move away from the club, along with Chambers, Xhaka was the best player for the Gunners at Goodison Park. While his days in north London looked numbered, his presence could be needed against an energetic Cherries side. 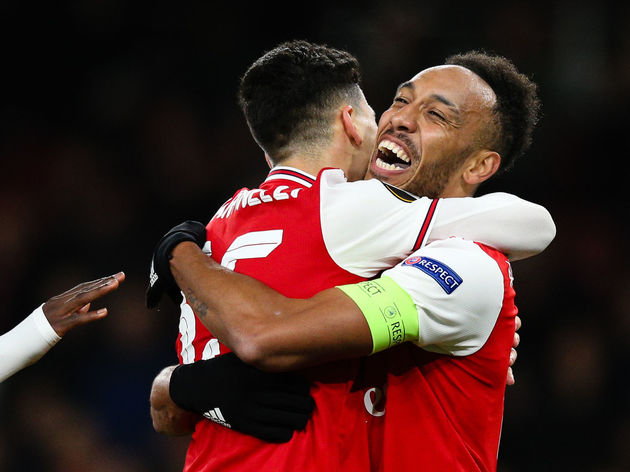 Nicolas Pepe (RF) – Benched for the game with the Toffees, Pepe has shown glimpses of his ability since making his club-record move from Lille over the summer. That said, he hasn’t lived up to his potential yet. Whether Arteta can be the man to unlock his undoubted talent remains to be seen, but he should get the nod on Thursday.

Gabriel Martinelli (LF) – One of the only bright sparks for Arsenal this season has been the form of their new Brazilian wonderkid. Still only 18, the forward has sparkled in Europa League and cup competitions, so much so he has become a regular fixture in the Premier League. Will want to add to the away goal he netted at West Ham earlier in the month.