Jones Knows is here for the midweek Premier League insights and betting angles. He thinks Burnley have the tools to blindside Man Utd at 6/1.

Steve Bruce’s men might sit in relative comfort, eight points above the drop – but safe from relegation they are not.

Sky Bet have them at just 100/30 to fall through the trap door as the traders seem to firmly believe the distinctly average performance levels seen from Bruce’s boys will catch up with them in the second half of the season. I agree.

The continued absence of Allan Saint-Maximin makes it very hard to put faith in the Toon to get a positive result on the road, even against a team with no Premier League victory this season. He is vital to the way they construct attacks from their deep-lying defensive shape. Without him, it’s hard to get out.

Listen to the Sky Sports Pitch to Post Podcast on: Spotify | Apple | Castbox

In the 12 games without him away from home, Newcastle have a win percentage of just 8.3 per cent. Contrast that to the 14 games with him in the side on the road and Newcastle boast a monstrous 42.9 win percentage. 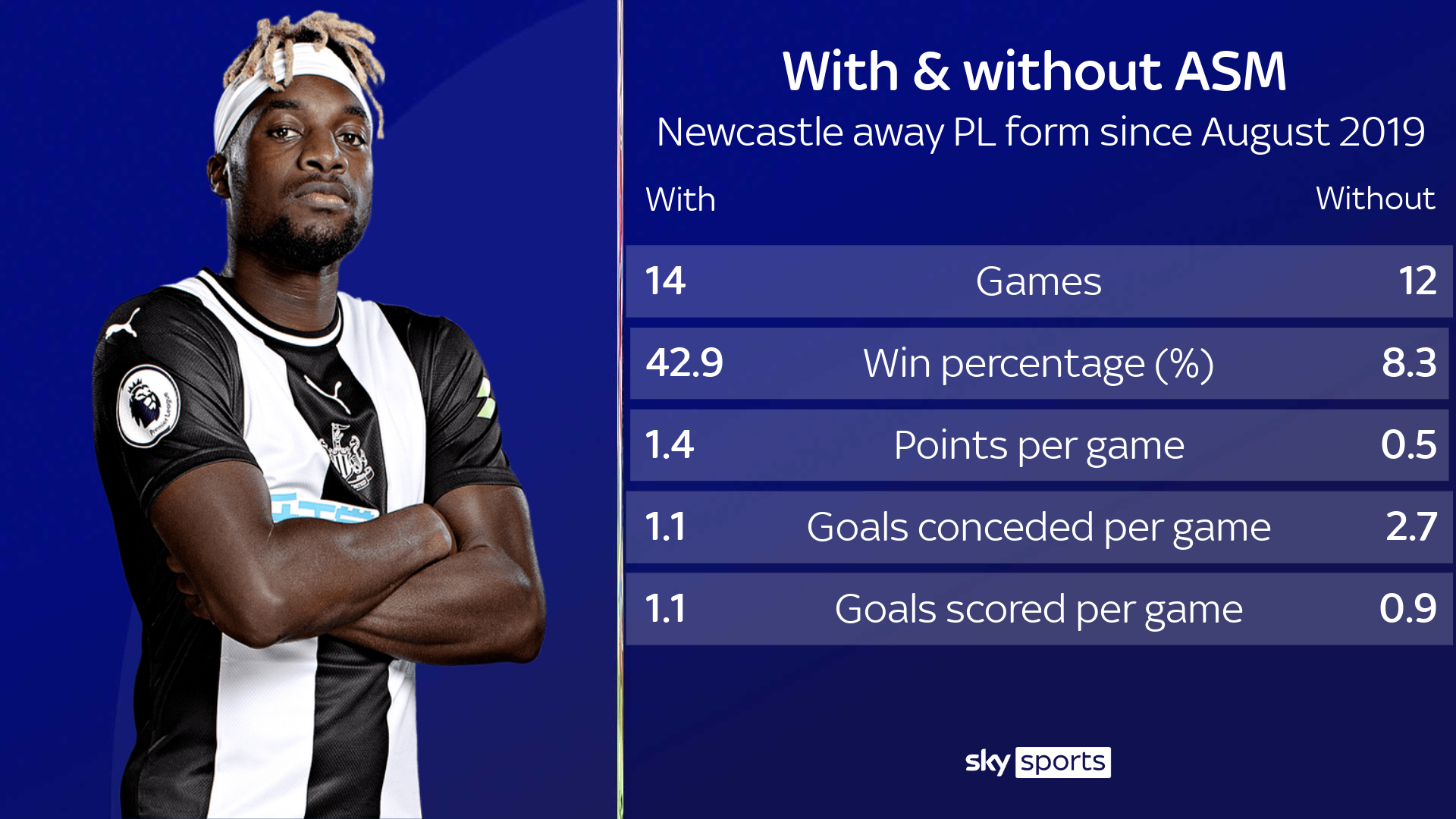 I still firmly believe Sheffield United are the better of these two teams, despite their precarious form and league position.

If these two played this fixture 10 times, the Blades would win more than they’d lose. Yes, two points from 17 games is the joint worst start made by any side in English football but confidence could just be returning after breaking a 22-game winless run against Bristol Rovers in the FA Cup. Once they start scoring the first goal in games, the Blades will start to pick up results. Their season starts here.

I’m all over Wolves here.

That said, I feel Carlo Ancelotti has done a quite magnificent job to get Everton to 29 points. He’s had to adapt like a top manager does to losing more creative members of his team like Lucas Digne and James Rodriguez. The style has gone from swashbuckling to snooze-fest but points have been picked up in grizzly fashion. With big players coming back to fitness, Everton may find their rhythm in the coming weeks but to my eye the balance has been missing in their performances, culminating in losing to West Ham and only just squeaking past Rotherham in the FA Cup.

In fact, since December 18 in their three Premier League games, Everton’s expected goals figure of a combined 1.74 is the second lowest in the league, as is their haul of just seven shots on target. You’d expect a greater return from matches against Arsenal, Sheffield United and West Ham. They are easy to oppose at Molineux.

His athleticism, clever movement into the box and physicality turn Wolves into a greater beast. In the six games he’s missed in the Premier League this season, Wolves have picked up just two points. In the 11 he’s started, Wolves have won six with a points-per-game average of 1.8. The corresponding fixture last season finished in a 3-0 home win and I can see a similar end result here, especially with Everton being without Dominic Calvert-Lewin.

Manchester United have put themselves in a fantastic position to compete for the Premier League title.

Forget Liverpool on Sunday, it’s games like these that will determine whether they possess the necessary tools to go all the way. Having backed them at 25/1 and 20/1 to do so, I’m hoping Ole Gunnar Solskjaer can steer clear of trouble along the way, including in this dangerous fixture.

But, my gut is telling me there is a banana skin ahead. Those taking the 4/9 for an away win should think twice.

If you ignore the annual 5-0 defeat at Manchester City, Burnley have only conceded one goal from open play in 720 minutes of Premier League football. That is a frightening record and it’s no surprise it’s coincided with the return of Ben Mee.

United may have put together a phenomenal away record, meaning they are unbeaten in their last 14 Premier League away days, winning 11 of those – yet, they still don’t perform like a truly dominant side. Wins at Brighton, West Ham and Southampton all were achieved on the backdrop of a distinctly average performance level for large parts of the game. They lost the xG battle in two of those games, too.

If Burnley can use their defensive prowess to repel United, then their most likely route to goal surely will come from set pieces. For a team that don’t enjoy much territorial advantage in their games, Burnley’s record of five goals scored from set pieces and 39 shots on goal from those situations is a very healthy strike-rate with Mee, James Tarkowski, Ashley Barnes and Chris Wood all very dominant in one-on-one aerial exchanges.

United are conceding just under three shots at their goal per fixture from set pieces and have conceded six goals from such situations this season, ranking them as the joint-sixth worst team at defending dead balls. John Stones also breached their defence in the Carabao Cup semi-final for City and Watford caused them issues in the FA Cup at the weekend.

With a potential eye on the sexier fixture on Sunday at Anfield, United may just get caught blindsided by Burnley, who have taken 10 points from a possible 12 in their last four home games.

I’m happy to side with the 6/1 for a home win but punters should also note 9/2 for the draw no bet and the 7/4 to have a draw and Burnley win on your side.

If Manchester City play like they did in that jaw-dropping 15-minute spell against Chelsea then the rest should lay down their swords now in the title race. They could go unbeaten until the end of the season if maintaining that level of performance. It was deadly.

However, there’s been too many stodgy showings still fresh in my mind to think that Pep Guardiola has got them back to the consistent beast they were 18 months ago. It was less than a month ago they were creating just a 1.87 xG figure in a 1-1 draw with West Brom at home.

There should be few problems on the horizon in this one, though. Brighton are starting to bore me. Graham Potter clearly is a coach capable of making players better footballers but from open play Brighton are yawn-inducing to watch in their current cycle of form.

If you exclude penalties and chances created from set pieces, in their last three Premier League games Brighton have created an xG of just 1.83 combined. I’m sure Potter will get Brighton flowing and confident again but where the chances are coming from is very much like the days under Chris Hughton. They are reliant on set pieces.

That won’t be enough to break through a City defence that, since losing to Spurs in November, has conceded just twice in the Premier League and allowed just 56 shots on their goal – 18 fewer than any other rival. Home win.

Despite reaching a major final, it’s not been the festive period Jose Mourinho would have wanted. The Leicester defeat revealed there’s still flaws in this Spurs side and they look a few points short of being able to compete with a fully revved up Liverpool and Manchester City. One of those flaws is being able to switch their style to chase a game at home – as seen when conceding first and losing to both Everton and Leicester this season. That factor does make them a hard team to trust at odds-on as the first goal in their games looks crucial to determining the outcome.

Well, they haven’t quite hit the heights they reached in their 2-1 win over Leicester in November and are winless since – albeit they have drawn their last four including against Liverpool. It’s hard to foresee whether having over two weeks off from Premier League football will work in their favour or not. I can’t trust them.

I’ll go with an edgy home win. Quality will tell.

There are smiles on faces at The Emirates again. No squad in the Premier League rely on confidence flowing more than Arsenal’s – granted, I can’t back that up with any statistical evidence but there must be something in the water there that make heads drop and bottom lips tremble during a bad run.

It would not surprise me to see Pierre-Emerick Aubameyang go on a scoring streak now after he found the net in the FA Cup against Newcastle. When on song, he is on a par with Harry Kane when it comes to converting chances.

However, I’d rather invest and rave about Kierney Tierney, who isn’t very Arsenal-like in terms of his attitude and consistency. His bottom lip stays strong. He is chasing a third assist in a row here, proving he has the quality in the final third to match his desire. Much of what Arsenal do rely on the full-backs providing an overload and Palace are likely to be exposed down that side. The odds on offer for a Tierney assist makes plenty of appeal.

There are only three certainties in life: death, taxes and Crystal Palace will be 14th in the Premier League.