England had been beaten one of the best World Cup knockout matches of all time. Yugoslavia had been left deflated by Edgar Davids’ stoppage-time winner. Now, the two victors – Argentina and the Netherlands – met in a heavyweight battle in the beaming sunshine of Marseille. France 98 had reached the quarter-final stage, and the World Cup was getting to its business end.

A 12th-minute cross towards Dennis Bergkamp was pelted at him chest height, but the soon-to-become Arsenal legend improvised to stunning effect. 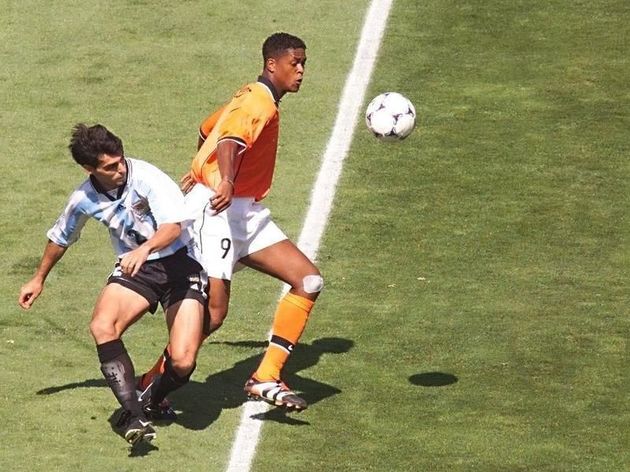 On any other day, his delightfully cushioned header into the path Patrick Kluivert to open the scoring would have been the highlight of the game for the player in question. Little did he know it (or maybe he did), Bergkamp was to one-up himself by going on to conjure up a moment of pure and untamed World Cup genius.

The knocked header fell into the path of Kluivert, who nipped in to prod the ball past goalkeeper Carlos Roa. 1-0 to the men in orange.

Only five minutes had passed since the goal, before the South Americans hauled themselves back level. And it was another lovely effort. This time though, the defence was completely and utterly suspect. More than suspect, dreadful. It was an admittedly perfect angled pass that slipped Claudio López in by Juan Sebastián Verón. But as the long pass skidded its way across the grass, López’s simple run inexplicably lost him his marker, and off the striker went, on a one-on-one handed to him on a silver platter by lazy, confused, ​Phil Jones-style defending.

Edwin van der Sar closed the forward down, while Gabriel Batistuta placed himself next to López in case he needed help. It could have been a sweaty – as they didn’t call it then. He didn’t need Batistuta. He dummied and then slotted home coolly.

And then in the second half, with a minute remaining, Bergkamp scored one of the great World Cup goals – an expression of technique, knowhow and craft.

Frank de Boer’s long pass was going to bounce away from Bergkamp and trundle off the pitch aimlessly for a goal kick. But it didn’t look aimless when the ball stuck to his boot. The physics weren’t controlling Bergkamp; Bergkamp was controlling the physics.

He chopped the ball cutely back across his body, sending Roberto Ayala away from the action. Then he volleyed high into the roof of the net with the outside of his foot.

The Netherlands had reached the World Cup semi-finals. And with that audaciously taken goal right at the death, Argentina hadn’t.

This was the Netherlands ten years on from their only major trophy at the time – and indeed their only to date. And yet the nation’s golden generation since the Johan Cruyff era fell closer in time to this win, rather than to the time they conquered all at Euro 88. With Bergkamp, Kluivert and the De Boer brothers, the nation had a bedrock of world-class players. Van der Sar wasn’t half bad either. Jaap Stam, Phillip Cocu, Davids – this was an exceptional side.

But they needed late goals to beat Yugoslavia in the round prior, and also Argentina here in Marseille. Things weren’t quite ticking. In this way, there was a likeness to France at the 2018 World Cup, who went long periods of playing very staid and unthreatening football, before springing into action and producing wizardry – because their individuals were more than capable.

The encounter would — and will always — be remembered for the inspirational late winner from Bergkamp, but it was Davids that ran the show from the first minute to the last. Cocu’s position suggested he should be the one pulling the strings, but Davids was in supreme control throughout, finding teammates that were better placed, and driving forward with the ball at any opportunity — something Argentina weren’t too adept at dealing with.

Argentina are known today as one of the most imbalanced sides in international football. An attack that boasts the likes of ​Lionel Messi, ​Sergio Agüero, ​Paulo Dybala, ​Mauro Icardi and Lautaro Martínez is world class, but the nation’s defence lags a long, long way behind. This performance from Argentina, off the back of a similarly shoddy defensive display despite victory over England, was similar in its inconsistency. Ortega, Verón and López were fluid in their interchanging positions and intelligent with the passes they chose. But a rigid back-four was only saved from embarrassment by Zanetti in the right-back position.

Without the ​Inter legend, Argentina could have lost this game more heavily.

Just as Davids was prepared to carry the ball forward powerfully and efficiently for the Netherlands, the Argentines had a willing dribbler too in the form of Juan Sebastián Verón. He kept the South Americans ticking over at crucial points in the game, and provided a link between another outstanding performer on the day — Simeone ­— and the two talented forward players in López and Batistuta. In the end, Verón was crowded out by the better Dutch midfield, but the intent, energy and invention were all there on display.

Things That Aged the Best

Argentina Going Out: Besides it also being a tad funny for bitter England fans, it was also a sign of things to come for Argentina, who have improved on their quarter-final showing here a grand total of once at World Cups since (runners-up, 2014).

Diego Simeone Playing: When a manager becomes as ridiculously good as Simeone is now, it can be easy to forget their career as a player. Simeone was an exceptional all-action defensive midfielder. Half of the Netherlands’ Team: Kluivert, Bergkamp, the two De Boer brothers. This Holland team had it all. What they would do for some of that invention, especially a striker, these days…

Two Red Cards: Mexican referee Arturo Brizio Carter gave a red card to both teams in this game. He ended up refereeing six World Cup matches, dishing out seven reds and 29 yellows. Refs have continued to be famously bad at World Cups since.

Things That Aged the Worst

Wim Jonk: After the tournament, the midfielder left a wonderful PSV Eindhoven team for ​Sheffield Wednesday. He got injured so often during his two years there that Owls fans were frustrated how much the club were paying him versus how often he was fit. He immediately retired.

The Netherlands Winning: They’d crash out to Brazil on penalties in the next round, and fail to even qualify for the World Cup in 2002 — pipped by the Republic of Ireland.

We all know what happened to the Netherlands. They went out to Brazil, and Mick McCarthy’s boys stopped them reaching the next finals. Swings and roundabouts, because Argentina qualified. Although not really ­— they went out in the group stages. Poor all-round. 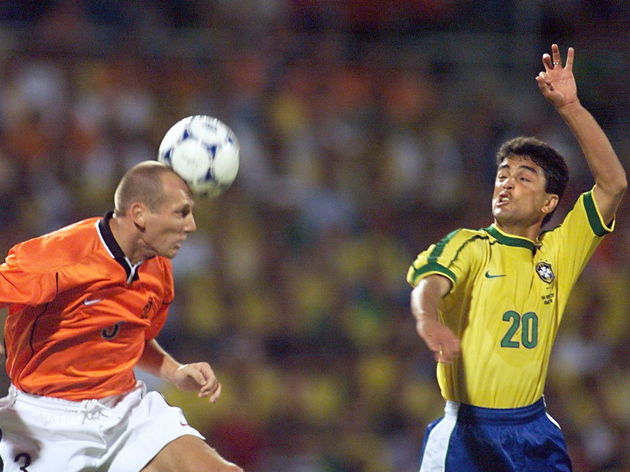 Holland would lose again to a wonderfully talented Croatia side in the third-place play-off, while France and Zinedine Zidane went on to thrash Brazil in a one-sided final.

Why did the Dutch manager Guus Hiddink go on to manage China’s Under-21s?

Why was the ‘dive’ that got Ortega sent off inside the box for Argentina the kind of challenge that would go down as a ‘stonewall’ penalty today? How come the rules haven’t changed… but they kind of have? Why do we have to wait more than three years for the next World Cup? We’ve been dealt a harsh hand there.

Has commentary ever got any better than the ‘DENNIS BERGKAMP’ that went ringing in our ears for at least a month after the finals had finished?