After three months in the punting wilderness many bettors will be very pleased to see the return of the Premier League this weekend.

To celebrate the league’s return Paddy Power will refund losing bets on first/last goalscorer, correct score and scorecast bets if the favourite fails to win in that match.

Liverpool start things off on Saturday in the early kick off against Stoke and the Reds will be keen to open their campaign with a win against the Potters who are now under the stewardship of former Fulham and Manchester City boss Mark Hughes.

Rodgers’ men are just 2/5 (1.40) with Paddy Power to collect three points at Anfield despite the absence of Luis Suarez as his continues to serve his 10 match ban. Despite their short price in the market, Liverpool haven’t won a Premier League game against the Potters in their last four attempts, although they have beaten them twice in cup competitions in that time.

The Swans took their foot off the gas a little after their Capital One Cup victory but maintained a very good record at home in the earlier part of the season including holding Manchester City, Chelsea and Manchester United to draws at The Liberty Stadium.

With David Moyes now at the helm plus a poor set of pre-season results before Sunday’s Community Shield victory this could be one of the more likely games to see punters having their stakes refunded. 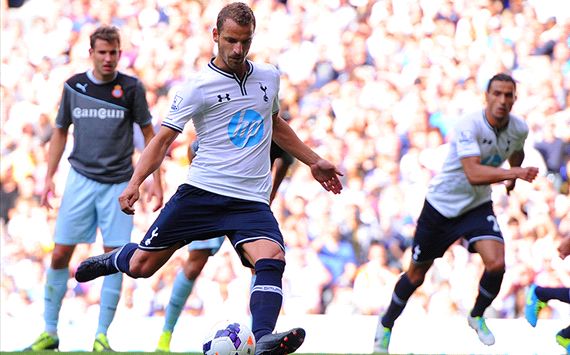 With question marks over Gareth Bale’s future and fitness Spurs will be looking to their new signing Roberto Soldado to hit the ground running on his competitive debut and the Spanish international is 7/2 (4.5) to score the first goal which looks a good price if Bale doesn’t feature.

Palace have new frontmen of their own with Dwight Gayle (9/1) and Marouane Chamakh (10/1) both longer prices to get the first goal of the match.

Monday evening sees Newcastle travel to Manchester City as Manuel Pellegrini takes charge of his side for the first time in the Premier League and the home side are rated as just 1/3 (1.33) chances to open their account with a win while Newcastle can be backed at 8/1 (9.0).