The defender, who earned his 100th cap during the World Cup, says the national team is “in better shape than ever” heading into the future

Arsenal and Germany defender Per Mertesacker has announced his retirement from international football.

The 29-year-old surpassed the 100-cap mark during his country’s triumphant World Cup campaign this summer, 10 years after making his senior debut.

The towering centre-back says he is happy to bring an end to his international career on his own terms and insists the future of the Germany side has never looked brighter.

“The main thing for me was that I wanted to be able to decide when my international career would end after ten years myself,” he said.

“There is no reason to fear the future. Young players will come through. Germany are in better shape than ever before.

“I now want to win the Premier League title with Arsenal and make an impact in the Champions League.” 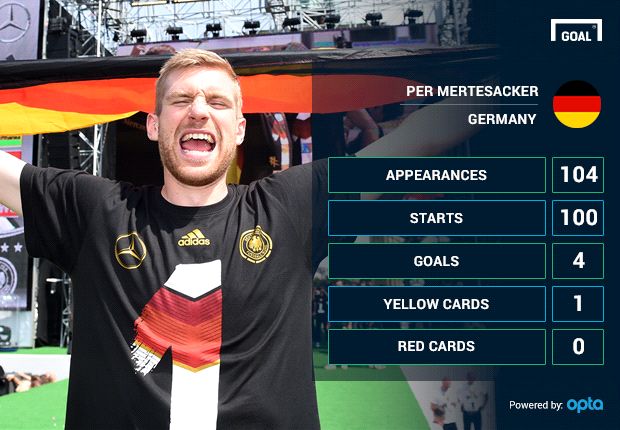 Mertesacker made his senior Germany debut under Jurgen Klinsmann in 2004, when he came on as a substitute against Iraq in October.

The former Werder Bremen stopper was part of the side which claimed third place at both the 2006 and 2010 World Cup finals and finished runners-up to Spain at Euro 2008.

Mertesacker came on as a last-minute substitute in the 1-0 final victory over Argentina at the Maracana this summer, making a total of six appearances during the tournament.