Liverpool opened up a nine-point gap at the top of the Premier League after recording an emphatic 5-1 win against Arsenal. ​

It would be the visitors who broke the deadlock after just 11 minutes, as Ainsley Maitland-Niles converted Alex Iwobi’s cross at the back post to give the Gunners the lead, before Roberto Firmino equalised for the hosts just three minutes later – tapping in after the ball ricocheted into the Brazilian’s path as Arsenal tried to clear their lines.

While his first goal was fortuitous, Firmino’s second to give Liverpool the lead in the 16th minute was fabulous. Lucas Torreira was caught in position by Sadio Mane, resulting in the ball finding Firmino, who glided past two Arsenal defending before calmly slotting home.

Liverpool extended their lead in the 32nd minute, as Mane was on hand to finish Mohamed Salah’s square ball following a corner, before the Egyptian’s converted penalty after being fouled by Sokratis Papastathopoulos on the stroke of half-time made it 4-1 at the interval.

A vital challenge from Sokratis denied Mane the chance to score a fifth goal for Liverpool at the beginning of the second-half, while Aaron Ramsey deflected shot found Pierre-Emerick Aubameyang at the far post, with his awful miss mattering little as he was offside.

Liverpool however wouldn’t be denied a fifth, as Firmino made it 5-1 in the 65th minute from the spot to complete his hat-trick, after Dejan Lovren had been bundled over by Sead Kolasinac from a corner to wrap up a convincing win for the Reds.

After conceding in the 11th minute, Liverpool showed they had title-winning credentials to bounce back almost immediately and turn the game on its head, with two Firmino goals in two minutes turning the game back in the home side’s favour. 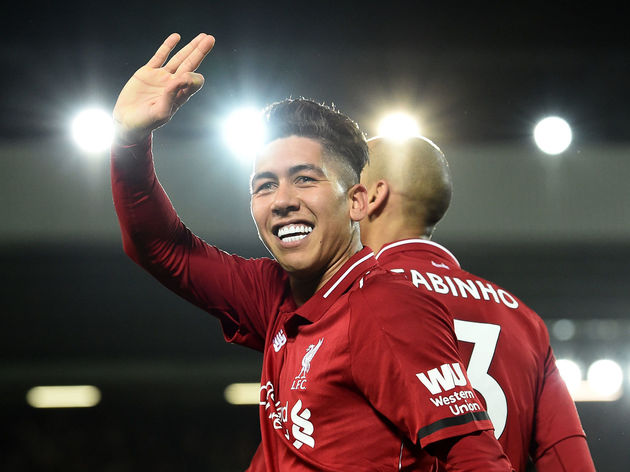 From then on Liverpool looked like they’d score every time they went forward, as they pressed and harried Arsenal into mistakes, and took advantage of those errors and sealed another precious win.

It has to be Roberto Firmino after scoring his first hat-trick in a Liverpool shirt, with his first two goals coming at a vital time after the Reds had conceded an early goal.

The Brazilian’s second was the pick of the bunch, as he glided past two Arsenal defenders before slotting home, while his performance was laced with the effort and energy that we’ve come to expect from Firmino since arriving to Anfield.

Roberto Firmino’s first half against Arsenal:

Absolutely love that second Firmino goal. Apart from the great footwork, both defenders try to completely take him out after he’s gotten past them and he just…drifts away.

Don’t think Klopp will be happy with the majority of that first half performance and it’s still 4-1. Arsenal a defensive shambles. Second goal from Firmino excellent. Him, Wijnaldum, Mané, Shaqiri all good so far.

​WORST PLAYER
​
Andy Robertson didn’t have a bad game by any means, although he allowed Ainsley Maitland-Niles to run off him for the games opening goal as the Reds in general started slowly.

Only Manchester United have a worst defence than Arsenal in the top six this season, with their Achilles heel on full display at Anfield as Liverpool ran riot after the first 15 minutes. Each one of Liverpool’s goals could’ve been averted by Unai Emery’s side, with individual mistakes costing the Gunners on every occasion, whether it be Lucas Torreira for the Reds’ second or Sokratis’ foul for their fourth as just two of many examples.

The January transfer window can’t come soon enough for Emery, with defensive reinforcements a must.

Despite his age, Ainsley Maitland-Niles was Arsenal’s best player, not only with his goal, but his general play on the right wing, with the versatile midfielder showing some nice touches throughout.

Unfortunately there isn’t enough room for Arsenal’s entire back four to be named for this unwanted award.

Sokratis however gets it, as he dived in rashly in the build-up to Firmino’s second, and gave away the penalty that Salah converted, although in truth, any Arsenal defender could’ve been named here.

The equaliser must go down as bad luck more than anything but Firmino made Mustafi and Sokratis look like school children on the second. And a rare bad moment from Torreira as well.

Lichtensteiner and sokratis were brought in to add some steel to this arsenal defense but boy Lichtensteiner has been bad. I miss bellerin so much right now #afc #LIVARS

Next for Liverpool is a big top-of-the-table clash to start their 2019, as they play Manchester City at the Etihad this coming Thursday.

Arsenal, meanwhile, will be desperate to bounce back from the defeat when they host Fulham on New Year’s Day.