The Foxes secure a first Premier League win over Arsenal since 1994 thanks to strikes from Iheanacho, Vardy and Mahrez. YES!#LeiArspic.twitter.com/0p3VBIZnXW

Former ​Borussia Dortmund striker Pierre-Emerick Aubameyang scored the equaliser with his second bite of the cherry just before the hour mark. However, Leicester replied with less than 15 minutes to play when

I feel like I’ve seen Vardy score a penalty against us about 20 times.

Arsenal showed brief glimpses of danger in the opening stages, but could not create any chances as Leicester looked lazy in defence.

The Foxes sprung to life on 12 minutes when Adrien Silva played in Jamie Vardy, who replicated his famous runs in-behind of years gone by and produced a good save from Petr

From the resulting corner, Leicester took the lead when Fousseni Diabaté knocked a header down to Iheanacho, who let the ball run across his body and smashed home from close range. 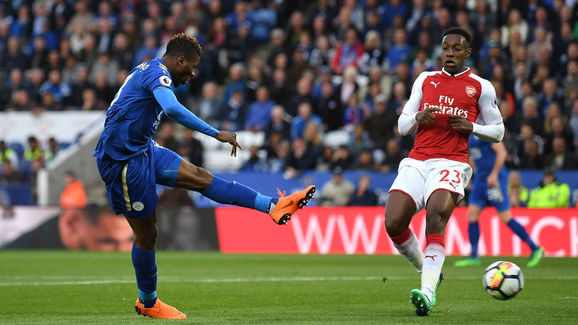 Things very quickly turned from bad to worse for Leicester as

Due to the red card, Arsenal sacrificed Danny Welbeck – who was replaced by Skhodran Mustafi between good chances for Harry Maguire and Kelechi Iheanacho.

The latter was particularly impressive having stepped in to replace the injured Shinji Okazaki. He showed great energy, enthusiasm and confidence in an impressive display, particularly in the early stages of the game.

How this is only 1-0 I have no idea. Back four getting no protection whatsoever. Cech working overtime

Arsenal had a rare chance to equalise ten minutes before the break, when Leicester goalkeeper Eldin

Leicester closed the half with good momentum going forward and would have been disappointed not to add to their tally before the half time whistle. The Foxes had Petr

Iheanacho created a glorious chance to extend their lead in stoppage time in the first half, when he won the ball in midfield and has a fantastic chance to play through Vardy.

What a magnificent half from #LCFC.

Only the one goal, but could could have had at least three were it not for some excellent saves from Cech.

The Gunners were lucky not to go 2-0 down just three minutes into the second half when Vardy played in Diabaté, but Mustafi recovered to clear the youngster’s effort off the line.

The goal was the Gabon international’s 22nd goal of the season across all competitions and has now started to justify his hefty price tag.

Arsenal could have gone on to score a winner when Sead

Wenger’s men slowly built momentum through the second half, with some promising attacking moves, but could not create too many strong chances as they desperately searched for a winner.

The game turned on its head once again soon after, when Mkhitaryan was adjudged to have fouled Demarai Gray in the box and referee Graham Scott did not hesitate in pointing to the spot.

England striker Jamie Vardy stepped up to calmly stroke the ball into the top left corner and restore the Foxes’ lead.

Leicester were seeing the game out in style, when Riyad Mahrez sent Calum Chambers for a burger as he turned inside and fired home to ensure a much needed win after a week of speculation around Claude Puel’s future.

The Foxes have picked up their first victory against Arsenal in 23 attempts and will now travel to Wembley on Sunday as they take on ​Tottenham Hotspur. Meanwhile, Arsenal will travel to Yorkshire as they face ​Huddersfield Town.