It’s hard to believe that the best player in the Premier League doesn’t play for the side which is ten points clear of the chasing pack – with a game in hand.

But despite sitting in third place, Manchester City’s Kevin de Bruyne is proving to be a class above his opposition, and he wrote himself into the English football history books with another assist during his side’s 3-1 victory over Leicester City. 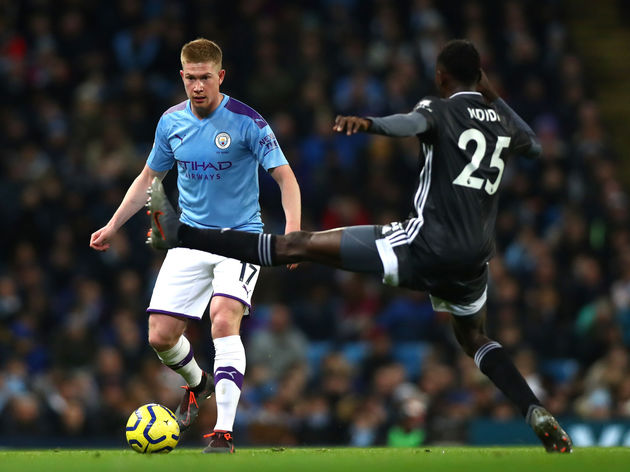 De Bruyne laid the Citizens’ third goal of the night on a plate for Gabriel Jesus and (thanks ​Opta!) became

It wasn’t the only record that De Bruyne broke, either.

Although that stat is possibly less impressive, the Belgium international has also c​ManCityzensThat’s

5 – Riyad Mahrez is the fifth player to have played for Leicester in the Premier League and then score against the Foxes in the competition, after Julian Joachim, Emile Heskey, Chris Wood and N’Golo Kanté. Outfoxed. pic.twitter.com/2kG7F8Cpf3

incrediblespecial​Liverpool​Leicester, who have amassed 42 and 41 respectively.

With Pep Guardiola’s side re-finding their groove, and the Reds desperate to finally claim the elusive Premier League title, plenty of records could tumble this year.