Watford striker Troy Deeney seems to have no regrets over the comments he made towards Arsenal earlier in the season. ​He claimed, after scoring the winning goal in a 2-1 win over the Gunners in October, that the club lack ‘cojones’; and Arsene Wenger’s side appear to have turned a corner since Deeney’s remarks.

The comments also seemed to have a negative impact on Deeney and his Watford side, though. Following the Arsenal match, the Hornets seemed to fall into a slump that resulted in the departure of manager Marco Silva.

It’s the kind of situation that one might regret in hindsight, but Deeney claims that his statement had a lasting effect on the Emirates outfit, and having grown up an Arsenal, he seems pretty happy about that.

“When we played them on that day I felt they didn’t have enough leaders on the pitch and that was it. 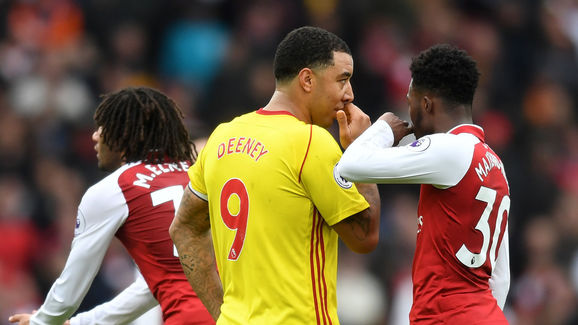 Since then, the two sides met each other again, and Deeney once again won a penalty. This time his effort from 12 yards was saved by Gunners stopper Petr Cech – but that doesn’t seem to bother him.

“I spoke to [Ainsley] Maitland-Niles, after I missed the penalty, and said ‘I’m glad I can help you bring out a decent crowd.’

“Because I watched the game when they lost a week before to Man City, when the snow came and they had like 10,000 there – but then for the next game it’s sold-out and everyone’s giving Troy grief.

“I’ve made Arsenal’s season. They’ve stepped up since then.”