Watching ​Masters Football used to be an entertaining way to spend a weekday afternoon, but nothing more. Right?

The competition was in fact a daring but deranged modern art exhibition.

Middle-aged, sweat drenched footballing icons of yesteryear shuffling around a half-full sports hall, for the entertainment of bemused fans…the organisers were clearly trying to comment on the cruelty of the ageing process and the fleeting nature of fame.

Alright…maybe they weren’t. Either way, we bloody miss Masters Football.

In fact, 90min is yearning for its return so intensely we thought we would have a go at selecting some squads should Sky – or anyone else for that matter – decide to reboot it this year.

With Tottenham’s ​starting six already sewn up, it’s time for their north London neighbours to get the same treatment. Before we get cracking, here’s a few disclaimers. 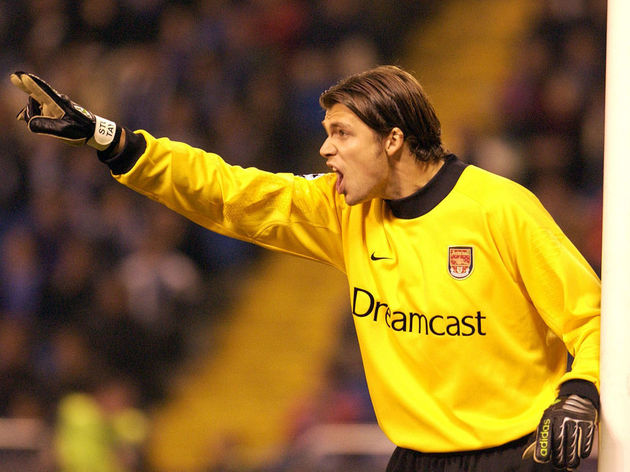 Club Lowlight: Sitting on the bench for eight years.

We would’ve have selected Manuel Almunia, but the Spaniard’s health problems preclude him from inclusion. Damn.

Scrambling around for someone, anyone to replace him, we finally settled on Stuart Taylor. The quintessential backup keeper, Taylor made a ludicrously limited 87 appearances during his near two decade career.

We fully expect him to be rubbish, don’t worry. Club Lowlight: Being mocked for ‘having a girl’s name’.

We’ve got a genius plan to shift a few tickets. Rather than announcing Lauren beforehand, we’re just going to list him as ‘Member of Arsenal’s Invincibles Team’ on the teamsheet.

We’ll probably give him the number 14 shirt as well – just to really whip people into a frenzy. Club Lowlight: Not staying to play for Arsene Wenger for longer.

Paul Merson was made for Masters Football. All the time in the world to pick out sexy cross-field passes, without all that pesky running he hated during his professional career.

Merse would definitely be up for a game as well. He seems to pop up with a worldie in every charity match he’s part of. Little Mozart and Merse in midfield. If that isn’t enough to get you onboard with our Masters reboot plan, nothing will.

It’s easy to forget that Tomas Rosicky spent a full decade at the Emirates Stadium – mainly because the club won so little silverware during that time. Club Lowlight: How long have you got?

Andrey Arshavin promised so much, but delivered so infrequently. His four goals against Liverpool shows that a special player was in there somewhere, but for every moment like that, there were five absolutely stinking performances.

The second half of Arshavin’s Gunners career descended into a joke, as he delivered one goal in 26 Premier League games over two seasons. He’s pretty young by Masters standards though, so we’re sure he’ll bang him in. Although I could never pronounce his name as a kid, The fact that Arsenal managed to complete a season unbeaten when this chopper was occasionally included in their backline is nothing short of miraculous.

Well, that’s probably over doing it a bit…but Pascal Cygan was not a very good defender and was nowhere near talented enough to replace Tony Adams and Martin Keown. He’s good enough for us though, don’t you worry. Club Highlight: For him? Probably the Tuesday Club.

Club Lowlight: Not many to be honest.

As long as there’s a decadent after party, Ray Parlour would definitely be up for getting involved in our Masters side.

No one has made more appearances for Arsenal in the Premier League than the Romford Pele, just make sure he stays away from the Cobra until after the game yeah? Club Highlight: Turning into a monster in the League Cup.

Club Lowlight: Being rubbish other than that.

In every Masters team of old, there was always one or two players whose existence you had completely blocked out from you memory.

Playing that vital role in out side is the Beast, aka Julio Baptista. Do you remember when he tucked four against ​Liverpool in the League Cup quarter finals? And then two against ​Spurs in the semis? Corr, what a player.