Demarai Gray’s late thunderbolt lifted the mood at Everton as Rafael Benitez’s side came from behind to secure a dramatic 2-1 victory against Arsenal at Goodison Park on Monday Night Football.

It looked like another night to forget for Everton’ when Richarlison was twice denied goals after being ruled offside by VAR, the first coming moments before Martin Odegaard gave the visitors the lead in stoppage time at the end of the first half.

However, the Brazilian wasn’t to be denied a third time as he headed home the rebound to bring the scores level after Gray’s strike had hit the crossbar.

Arsenal, who will feel aggrieved Ben Godfrey didn’t see red after his studs caught Takehiro Tomiyasu in the face in the first half, had a glorious chance of their own to retake the lead in the final 10 minutes when Eddie Nketiah headed against the post from inside the six-yard box, but it the points were Everton’s as Gray’s powerful effort hit the inside of the post and went in to start the home celebrations.

The victory sees Everton, who saw a small section of their supporters walk out in protest at the running of the club in the 27th minute, move up to 12th, relieving the pressure that was building on Benitez after an eight-game winless run.

Meanwhile, Arsenal, who stay seventh, lose ground in the race for fourth after wins for West Ham, Tottenham and Manchester United at the weekend.

How Everton relieved the pressure on Rafael Benitez…

Everton went into the game looking to halt their long run without a win and started brightly, but they did look like a side lacking rhythm in the early stages.

Benitez asked for “big effort and commitment’ in his programme notes, and an early crunching tackle from Godfrey whipped the home fans up as they looked to get behind their side.

Man of the match: Demarai Gray.

The 27th minute of the game – chosen because it is 27 years since Everton last won a trophy – did see some Everton fans leave their seats in a planned protest, and a banner was unfurled in the Gwladys Street End that read ‘we demand nil satis nisi optimum, it’s about time our club did too’, referring to the club’s motto that translates as ‘nothing but the best is good enough’.

Back on the pitch, Godfrey survived a VAR check for a red card after standing on Tomiyasu’s face on his follow through. The VAR Stuart Attwell got referee Mike Dean to pause the game, but Godfrey, who Sky Sports’ Jamie Carragher described as a “lucky boy” during his half-time analysis, survived. 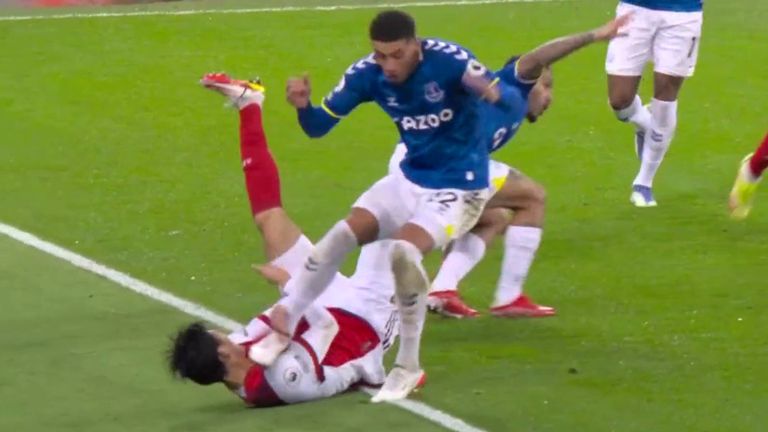 Gary Neville and Jamie Carragher both thought that Everton’s Ben Godfrey showed intent when his studs met the face of Arsenal’s Tomiyasu. The incident was referred to VAR but the defender escaped seeing red.

Everton – who were forced to bring Yerry Mina off in the 31st minute, with Mason Holgate coming on – thought they had taken the lead in the 44th minute when Richarlison headed in from Andros Townsend’s free-kick, but the effort was ruled out for offside following a VAR check.

To add to Everton’s frustration, Arsenal struck moments later as Odegaard volleyed into the bottom corner after being teed up by Kieran Tierney.

After the break, Richarlison had the ball in the net again, but once again he was ruled offside following a VAR check.

It proved a case of third time lucky for Richarlison as he equalised in the 79th minute, heading in on the follow-up after Gray had curled a shot against the bar.

Arsenal had a golden chance five minutes later when substitute Nketiah headed against the upright from four yards out, and it proved a costly miss for Mikel Arteta’s side.

Everton took the lead in the second minute of added time when Gray’s fierce long-range strike clattered a post on its way into the net, leaving Aaron Ramsdale with absolutely no chance.

There was still one final chance for the Gunners, and it fell to Pierre-Emerick Aubameyang, who was left out of the starting line-up, but the Arsenal skipper’s barren run in front of goal continued as he steered a shot wide as Everton held on to lift the gloom that had been building over Goodison Park.

6 – Pierre-Emerick Aubameyang has failed to score in each of his last six Premier League appearances, his longest such run in the competition. It’s his longest goalless league run overall since a 14-game spell from February to August 2014 with Borussia Dortmund. Concern. pic.twitter.com/4zhPM8Uy0a

What the pundits said…

‘That was Everton football’

Sky Sports‘ Jamie Carragher: “When you think he’s really under the cosh as a manager, he just doesn’t panic.

“That’s the biggest strength of Rafa. Under pressure, he doesn’t panic.

“It’s a huge win. I mentioned when Rafa came in about understanding Everton football. That’s what it was – it’s not about possession.

“Arsenal dominated possession, but Everton were the better team. As soon as they got the equaliser, you felt there was only going to be one winner.”

Sky Sports‘ Gary Neville: “They absolutely deserved it. They were better than Arsenal, you’ve got to get the crowd involved, and the Richarlison disallowed goals fuelled them.

“It gave Rafa and his team something to hang onto, and he’ll be absolutely delighted. The talks of walk-outs never materialised, it’s a great night for them.”

Neville added: “It was a really timid performance from Arsenal. You’ve got to compete when you go to Goodison Park, I know they’re on a bad run, but those decisions, the VAR decisions, fuelled the crowd.

“The players responded, it’ll be a massive relief for the fanbase and the people upstairs who were under massive pressure too.”

Man of the match – Demarai Gray

Opta stats: Three in a row for Everton against Arsenal…

Everton have won three consecutive league matches against Arsenal for the first time since April 1986.

Everton have won 10 points from losing positions in the Premier League this season, more than any other side in 2021-22.

Arsenal have lost consecutive Premier League matches when scoring the first goal in each match, the first time they’ve done that since December 2016, with one of those defeats also a 2-1 loss against Everton at Goodison Park (the other was a 2-1 defeat to Man City).

Demarai Gray’s winner for Everton was scored after 91 minutes and 21 seconds, their latest winning goal in a Premier League match since December 2015 v Newcastle (92:46), and latest at Goodison Park in the competition since March 2014 v Cardiff (92:33).

Everton travel to Crystal Palace on Sunday December 12 (4.30pm) in a game you can see live on Sky Sports Premier League, while Arsenal host Southampton on Saturday December 11 (3pm)