It’s been a whirlwind 12 months for Arsenal’s Alex Iwobi. The 20-year-old’s career highlights so far include scoring in each of his first two Premier League starts last season and being selected in the starting XI which faced Barcelona at Camp Nou – but there’s much more to the Nigeria international than meets the eye.

Iwobi’s backstory is well-known now. He joined Arsenal’s Hale End academy system at Under-9 level and signed his first professional contract in May 2014 after almost being released by the Gunners on two separate occasions. There were doubts over whether he would ever be good enough for the top flight but continuous hard work on and off the training pitch has helped him become a favourite in Arsene Wenger’s current forward line. 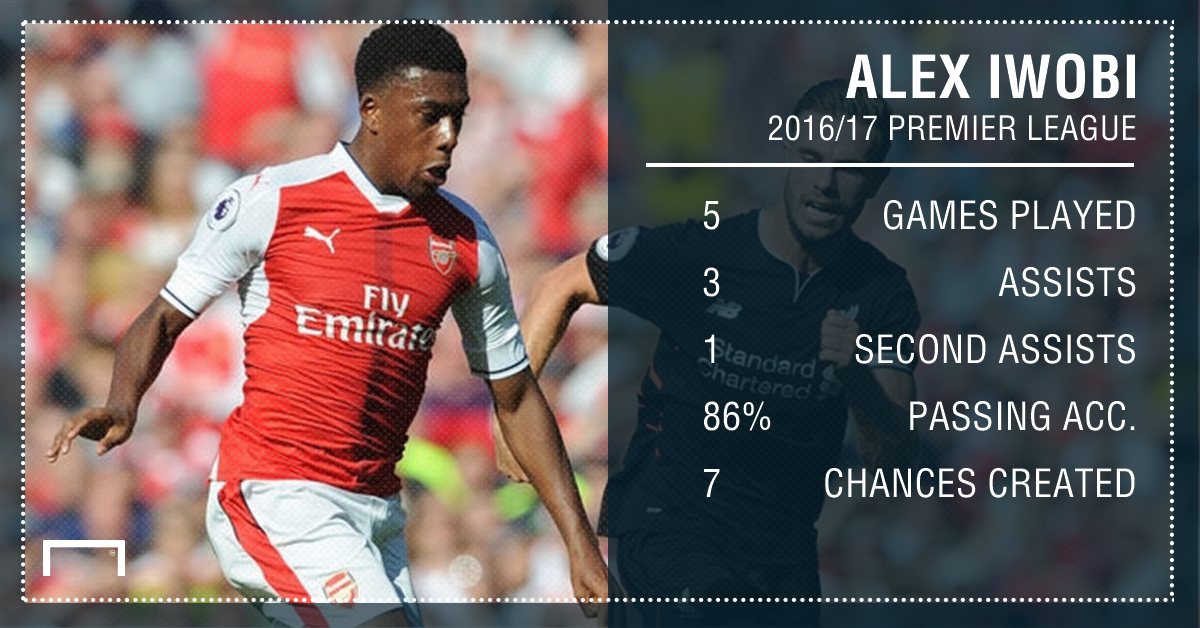 “Alex Iwobi was with me when he was 9 and 10 years old”, former Arsenal academy chief Liam Brady told Goal.

“He has blossomed into an exciting mature player and has also demonstrated his football intelligence, being able to play with the likes of Mesut Ozil and Santi Cazorla.”

Wenger is a huge admirer of Iwobi’s family-orientated character and ability to stay humble at a time where everything is going right for him. Having been nominated for the prestigious Golden Boy award last week it’s a trait which will come in handy over the next few years. The progression of Iwobi from reserve player to first team star remains a magnificent achievement and it’s no surprise to see him playing regularly for Nigeria’s national team either.

It’s testament to how far Iwobi has come when you see that he has more assists than any other Arsenal player in 2016, including last season’s assist king Mesut Ozil. The prodigious Iwobi tends to roam in the spaces where Ozil usually receives the ball from, which is one of the reasons why the German’s assist numbers are down. Despite that, the connection Iwobi has managed to build with Ozil, Sanchez and Walcott is a feature of Arsenal’s attacking play which supporters have now become accustomed to.

Previous winners of the Golden Boy award include Lionel Messi, Wayne Rooney and more recently Paul Pogba, all of whom have gone on to establish illustrious careers for themselves. Iwobi can certainly do the same if he maintains his current level of commitment and attitude towards the game. He’s a worthy candidate for the award for several reasons. 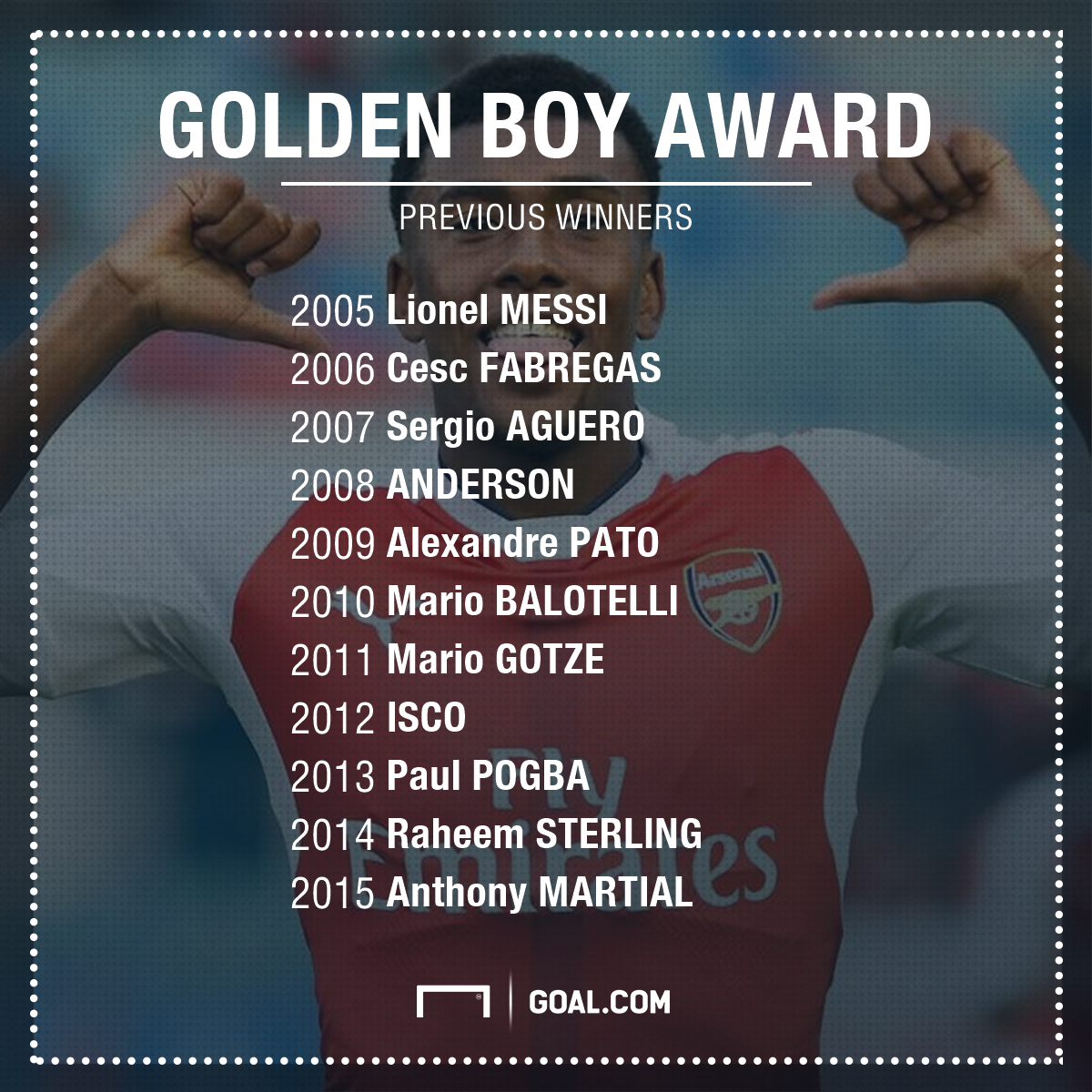 Firstly, Iwobi has worked his way through the club’s academy system without ever being shipped out on loan to gain experience. He’s an Arsenal player moulded and immersed in the famed footballing philosophy which Wenger has pioneered at London Colney since 1996. The difficulty in graduating from a European elite academy cannot be understated, neither can breaking through into the first team full of international players who have untold levels of experience.

Academy chief Andries Jonker has implemented various changes at Hale End since replacing Brady in 2014 and also puts down Iwobi’s first-team promotion down to his personality rather than his outstanding technical ability.

“He has really progressed from the reserves to the first team and it is through hard work and, above all, humility, respect for senior players, understanding and a desire to learn”, Jonker told Arsenal’s Official Magazine.

Iwobi comes up against the likes of AC Milan goalkeeper Gianluigi Donnarumma and Manchester United striker Marcus Rashford for the Golden Boy award.

Thus, Iwobi is by no means the frontrunner, but if the decision is based on individual talent and an ability to influence a game through wilful running, incisive passing and passion for the game then Iwobi undoubtedly deserves to win.

A strong contender for the CAF African Young Player of the Year award, it could be a year of more praise, clamour and personal honours in recognition of a player who has impressed since arriving on the scene last year.

Jay-Jay Okocha, Iwobi’s uncle, has helped the Gunners star along the way and in a recent interview with Goal Nigeria his father expressed his delight at how he is beginning to follow a similar path to the former Bolton star.

“I mean, Jay-Jay has been his mentor, he encourages him, he tells him where to go and how to conduct himself”, said Chuka Iwobi.

“In the scheme of things, he still wants to have his own identity just like any other player, so Alex Iwobi is Alex Iwobi. And I’m glad he’s beginning to assert himself and become Alex Iwobi. With hard work and dedication, he can only get better and that is the prayer of every parent.”

Indeed, Iwobi appears to embody all of the qualities in which Wenger looks for when he signs a player and Arsenal are now in a position where they can proudly say an academy graduate has grown into a first team regular. His father is right – Alex Iwobi is certainly Alex Iwobi.