If the Premier League is indeed confirmed as finished in the next few days – with whatever outcome for Liverpool, the European chasers and relegation battlers – it means that the Team of the Season isn’t too far from blessing our screens on FIFA 20 Ultimate Team.

Every year, the division’s top performers are rewarded with some hugely boosted cards, and there are no shortage of potential contenders this time around.

So, with the end of the season approaching/already here/happening eventually, here’s a prediction of how the Premier League TOTS should look. Trent Alexander-Arnold (RB) – That wand of a right foot has been so crucial to ​Liverpool’s title charge this season. No defender in Europe does it better than ​Alexander-Arnold.

Harry Maguire (CB) – The second centre-back spot is far less clear, but ​Maguire probably edges it. His upturn in form helped ​Manchester United get their season back on track, which is why they made him the world’s most expensive defender.

Andy Robertson (LB) – The assists have been slightly harder to come by for Robertson this season, but he’s still in a league of his own when it comes to ​Premier League left-backs.
​Predicted Rating: 93 Kevin De Bruyne (CAM) – ​De Bruyne has been back to his creative best this season, tearing defences apart with terrifying ease. He might not get a league winner’s medal, but he’s going to get a TOTS.

Jordan Henderson (CDM) – Captain Fantastic. ​Henderson has led Liverpool to brilliance this season, so a shiny TOTS card is the least he deserves – even if a title is voided.

Wilfried Ndidi (CDM) – The anchor at the base of ​Leicester City’s midfield, Ndidi has been an absolute monster this season. With some of the best tackling stats around, the Nigerian surely deserves a reward. Mohamed Salah (RW) – Maybe not at the same pace as his first season, but the goals have carried on flowing for ​Salah, who remains one of the division’s top forwards.

Sergio Agüero (ST) – ​Agüero became the highest-scoring overseas player in league history this season, which tells you everything to know about just how many goals he has scored.

Sadio Mané (LW) – Dancing down the left side of Anfield, ​Mané has continued to prove himself as one of the world’s best wingers. He scores plenty of goals and has seriously boosted his assist numbers this year, in what has been a fantastic individual campaign. Kasper Schmeichel (GK) – Leicester have gone from good to great this year, and they owe a lot of that success to Schmeichel.

Ricardo Pereira (RB) – If he hadn’t got injured, Pereira would have had a real shot at making the starting lineup. The Portugal international was utterly outstanding for Leicester, but he’s unfortunately competing with Alexander-Arnold.

(CB) – The Maguire replacement may well end up replacing Maguire in this lineup as well.

Jack Grealish (CAM) – It’s been a tough year for ​Aston Villa, but that’s not Grealish’s fault. The Englishman has been a creative force to reckon with, and who knows, it might just be the last card he ever gets for Villa. Jamie Vardy (ST) – Despite being 33 years old, ​Vardy is still as prolific as they come in the Premier League. The year has been one long party.

Pierre-Emerick Aubameyang (ST) – Can you imagine where ​Arsenal would be without ​Aubameyang? The Gabon international has scored crucial goal after crucial goal, which is why he’ll be a wanted man this summer. 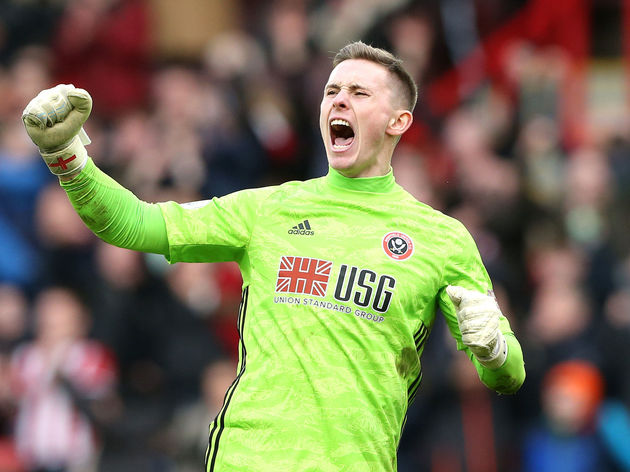 Dean Henderson (GK) – Henderson bagged an EFL TOTS last season and deserves to follow that up with a Premier League one, having enjoyed a fantastic year with high-flying ​Sheffield United.

Jack O’Connell (CB) – The Sheffield United centre-backs have taken England by storm this year. They all deserve credit, but O’Connell perhaps merits that little bit more. As with every professional, a virtual card with no real-world significance is the perfect prize.

James Maddison (CAM) – Whether he’s scoring, assisting or simply keeping Leicester ticking, Maddison has been at the top of his game this season. Everything he does has been so effortless. Adama Traore (RW) – This card would break the game. Traoré’s blend of pace and power has dominated defenders all year, and the Wolverhampton Wanderers man has taken his game to a new level by adding an end product.

Riyad Mahrez (RW) – ​Mahrez is back to the player who won the title with Leicester. He has danced past opponents en route to racking up goals and assists, driving ​Manchester City on their quest to catch up with Liverpool.