In what was his debut in the competition, Håland netted a first-half hat-trick to fire his side to a dominant 6-2 victory – taking his tally to a ludicrous 17 goals in just nine appearances this season.

That form has piqued the interest of sides across Europe, and 90min understands that representatives for 15 Premier League sides were in the stands to see Håland.

Some sent scouts, whilst other sent agents to evaluate the teenager’s performance. Whilst it remains unclear which teams didn’t have representatives present, sending agents usually indicates that a team is seriously interested in a deal – meaning there are plenty of suitors for the Norwegian.

​Håland has worked with Ole Gunnar Solskjær​Salzburger Nachrichten confirmed that representatives from as many as 50 European clubs were in attendance and that United were among them.

Solskjaer himself confirmed that he was watching as his former player starred on the big stage, in his pre-match press conference ahead of United’s Europa League clash with Astana. 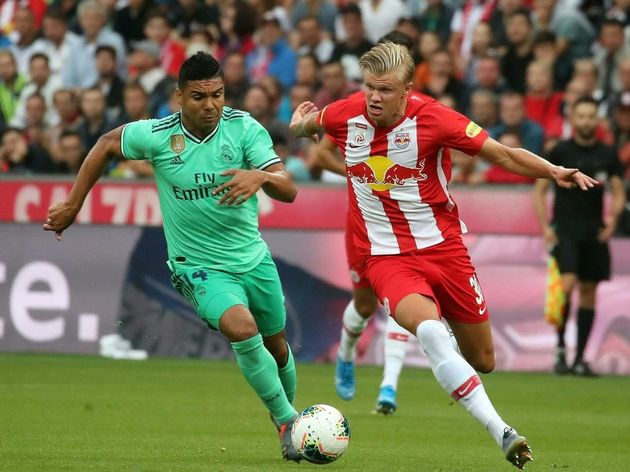 He said on Wednesday, via the ​Mirror: “It was nice watching the game last night. It’s great watching him and I think everyone in Norway is excited by his development.”

It seems just a matter of time before ​Leeds United

He only made move to Salzburg in January after agreeing a departure from Solskjær’s Molde in the previous summer, but has already established himself as one of the top prospects in world football.

The 19-year-old certainly has the attributes to make him a success. Standing at 6’4, Håland is powerful and also deceptively quick. His finishing has also not gone unnoticed given his recent goalscoring exploits.