You better have been strapped in tight on Thursday night. So much Europa League drama!

Manchester United took a bunch of kids to Kazakhstan to face Astana, despite not having secured top spot in their group, while Arsenal played in a barely half full Emirates and Wolves traveled to Portugal for another big game in their European adventure.

Scottish sides Celtic and Rangers were also in action, with both sides in strong positions before matchday five kicked off. It was a bit of a dead atmosphere at the Emirates, with plenty of ​Arsenal fans staying away from their game against Eintracht Frankfurt in protest at their recent poor performances. Eintracht’s fans were also banned from attending.

Arsenal only needed a point to secure qualification, and

However, Daichi Kamada wriggled through some lackadaisical defending to fire in and bring the sides level, and the Japan international would score again in the second half, firing past Emiliano Martinez from the edge of the box.

The loss means Arsenal still have work to do to reach the last 32, with a trip to Standard Liege having more riding on it than Unai Emery would have liked.

Granit Xhaka also made his return to the Arsenal team. He got booked. That’s about the long and short of it.

You can read the report ​here and the social reaction ​here. Rangers’ Europa League campaign has been quite the rollercoaster, but they took another big leap towards knockout stage qualification with a draw at Feyenoord.

Jens Toornstra gave the Dutch side the lead in the first half, but Alfredo Morelos’ 13-minute double put Steven Gerrard’s side in control.

Luis Sinisterra brought the score to 2-2, but a point still leaves Rangers in a good position, leading the group by a point. They will qualify if they avoid defeat against Young Boys at Ibrox. Wolves knew a draw would be enough to take them out of Group K but still surged into a 3-1 lead in the first half as they looked to leapfrog hosts Braga at the top of the standings.

However, despite Raul Jimenez, Matt Doherty and Adam Traore giving the visitors a commanding lead, Braga pulled one back when Paulinho struck, before Fransergio’s effort squared things up. 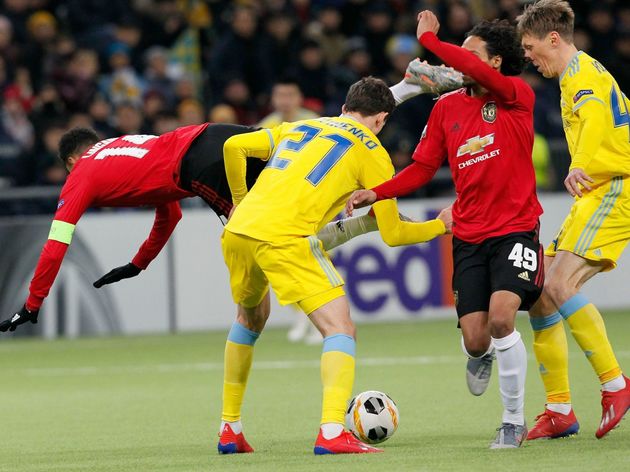 With qualification already secured, Ole Gunnar Solskjaer elected to take a young ​Manchester United squad to Kazakhstan for their clash with Astana.

However, Dmitriy Shomko’s strike and Di’Shon Bernard’s own goal ensured a first victory of the Europa League campaign for Astana, leaving United needing to avoid defeat against AZ Alkmaar in their final group game to secure top spot.

Check out the match report ​here, the social reaction to Lingard being named ​captain and the ​loss in general.

The other game in the group saw AZ secure their spot in the next stage with a 2-2 draw against Partizan Belgrade, the hosts coming from behind thanks to Ferdy Druijf’s brace after having Myron Boadu sent off.