Both Arsenal and Chelsea secured their place in the Europa League final on Thursday night.

Nevertheless, the (long) road to Baku has been an exciting one for both teams that started back in September 2018.

Here’s how both sides made it to the Europa League final.

After finishing sixth in the ​Premier League last season, ​Arsenal were resigned to another year of Europa League football. They crashed out at the semi-finals last year, but made sure history did not repeat itself this time.

Drawn in Group H, the Gunners kicked off their journey by welcoming Ukrainian side Vorskla Poltava to the Emirates Stadium. After a slow start, Arsenal stormed into a 4-0 lead and held on for all three points, despite two late goals from the visitors.

Next up was a trip to Azerbaijan to face Qarabag, who are often the unfortunate butt of Twitter jokes from fans who never look forward to facing ‘Carrier Bag FC’ on Thursday nights. The game was no problem for Unai Emery’s men, who secured a comfortable 3-0 win thanks to the inspired performance of young Emile Smith Rowe. 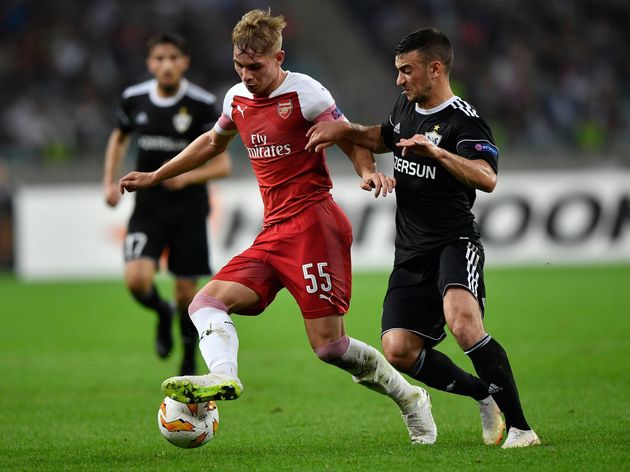 A frustrating 2017/18 season saw Chelsea finish fifth in the league so, after months of speculation, manager Antonio Conte was eventually replaced by Maurizio Sarri, who knew anything short of winning the Europa League would be deemed a failure.​

Their first test in Group L was a trip to Greece to face PAOK Salonika, and the Blues were dominant. However, they struggled to show that on the score sheet and needed ​Willian’s early goal to guide them to a 1-0 win.

Hungary’s MOL Vidi then made the trip to Stamford Bridge, and the story was similar. Chelsea were too good for their opponents, but simply could not find the back of the net before ​Alvaro Morata’s late strike, which he celebrated by showcasing his frustration, earned them the points. Chelsea then had their own date with BATE, and it went far better than Arsenal’s first meeting with the Belorussian side. A hat-trick from ​Ruben Loftus-Cheek saw the Blues pick up a 3-1 win, and their qualification was sealed after the return leg as ​Olivier Giroud’s second half strike proved to be the difference in a 1-0 win.

PAOK’s trip to the Bridge in late November was ‘The Callum Hudson-Odoi Show’, as the wonderkid dominated in a 4-0 win. Their perfect run in the competition came to an end in the final game of the group stage as Vidi earned a 2-2 draw, but Chelsea strolled through to the next round.

Sweden’s Malmo proved to be little competition for Chelsea, who coasted to 2-1 and 3-0 victories. Again, Hudson-Odoi was excellent, staking his claim for a regular place in Sarri’s lineup (spoiler alert: he got there eventually). While Arsenal were struggling in the knockout stages, Chelsea barely needed to get out of second gear. Dynamo Kiev were up next, but a 3-0 win in the first leg effectively ended the tie. In the return fixture, a hat-trick from Giroud sent Sarri’s men on their way to a 5-0 win, in what was little more than a training exercise.

The quarter-finals was where it got tricky. After winning 1-0 against Slavia Prague in the first leg, Chelsea had to work hard at home. The Czech side fought hard in their 4-3 loss, and were unlucky not to win the game. However, the Blues survived.

Finally, it was Luka Jovic and Eintracht Frankfurt. The wonderkid opened the scoring in the first leg, but a dominant Chelsea fought back on the stroke of half time through ​Pedro, and the score finished 1-1. The second leg ended the same, and the Blues needed penalties to overcome their opponents. The winning effort was courtesy of Eden Hazard, with what could be his final kick of a ball at Stamford Bridge.

They will have to work hard again when they meet Arsenal, in what promises to be an exciting affair.