It was Oscar Wilde who once said: “m Even more so in the football world in 2018 outside of the journalistic world, every man, woman, child and their dog is keen to have his or her voice heard. After all everyone has an opinion and indeed everyone is entitled to one. Even when that opinion really isn’t worth much.

Indeed the vitriolic, the fervent and the frustrated but always well-meaning sports follower is the very embodiment of the greater-spotted Arsenal fan. However, fan reaction over the imminent appointment of Unai Emery is the final straw.

I say this as a lifelong fan. If I strain every synapse of my being, I can hazily recall Michael Thomas’ last-gasp goal at Anfield on a tempestuous Friday night on Merseyside in 1989 as a six-year old. During Arsene Wenger’s swansong against Burnley, the hypocrisy in the air was rife. Many of the same fans that had called for Wenger’s head, openly and rightfully celebrated the tenure of the man who will go down as the club’s greatest ever steward.

But at the sheer mention of betrayal, reaction was of disgust that a fellow fan could even suggest such a notion. It was rather nauseating to both see and hear.

After Wenger finally left after a 22-year love-hate relationship in North London, many fans (including myself I add) got their wish to see the Frenchman finally make his much-needed bow at the Emirates. The clamour for a big name replacement was huge. After Luis Enrique demanded a king’s ransom to take over and Max Allegri elected to stay in Turin with Juventus however, all signs pointed toward former player Mikel Arteta taking the reins in the Arsenal dugout.

Fan reaction to Pep Guardiola’s number two being appointed was far from encouraging, for a man who is yet to take control of a single league game to date:

Bringing in arteta would be an insult to arsene

In a league peopled by the likes of Mourinho, Klopp, Pep, Conte, Benitez etc and the Arsenal board wants to appoint a timid Arteta as Manager. Our suffering just continues. 

After a week to digest the news however, opinion began to sway in favour of Arteta but just as the an Arteta-era seemed destined, a late move for former Sevilla and Valencia boss Emery was rushed through on Monday.

Whether a panic appointment or whether the 46-year-old from the Basque country was a name that had been whispered in the Gunners’ boardroom in the months previously is yet to be disclosed, but having moved from a managerial assistant with zero experience to Emery, the reaction was predictably mixed. But embarrassingly so:

Ffs the board are so messed up, Emery’s an awful choice, man lost the title to Monaco and done nothing in UCL with an unlimited budget

Done with this club @Arsenal Emery, really! Careful what you wish for and all that, but Emery, the most underwhelming appointment. Ivan has to go next

For a fanbase that wanted wholesale changes at the club, a late switch from Arteta to Emery is finally an example of rationale from a board who have been decidedly lacking in logic in recent months and years, going instead for a man capable of taking the reins from such illustrious company as Wenger – if not being the fan choice.

Having won eight major trophies in his 14-year managerial career, Emery is a winner and in Europe to boot. Something Wenger could only dream of having come so close in 2006 in Paris.

Of course, not every fan can be as well-qualified to judge as the next – that is certain – but the majority of fan opinion seems to be based on one rather well-documented result in the UEFA Champions League when former club Paris Saint-Germain famously surrendered a four-goal lead against Barcelona in the Nou Camp last summer. Emery will not suffer fools easily, as his well-publicised falling out with Neymar portrayed. Something which is in dire need at Arsenal. The players will know who their new boss is.

Emery is a choice that some suggest is the safe choice, that he is not bold. But that is rather arbitrary one feels. The Spaniard is likely to bring a very fan-friendly counter-attacking style to the Gunners, but after such a promising managerial start in Spain, spells in Russia and most recently in the French capital have raised questions over his consistency at the top level.

Change for Arsenal is good. It may take time to bring success back to the Emirates but Rome was not built in a day. Though the expectancy of certain corners of the Arsenal fan base would suggest they think otherwise. 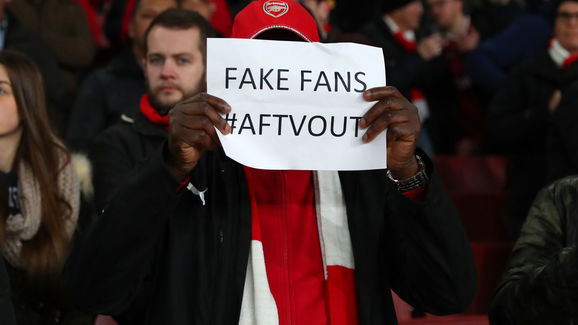 The very same voices that were so vocal in the criticism of Wenger with their A4 sheets of paper in protest, have rather laughably called for his immediate return and though probably in jest do not help in assuaging any bad feeling – indeed a growing sense – that Arsenal fans are rather becoming the laughing stock of football.

There is no question that the job will be tough, with less budget. But having turned Los Rojiblancos and Los Che into attractive sides capable of playable winning football, Emery will arrive in London with something to prove to himself.

For Arsenal fans a new era post-Wenger brings about exciting times, but in amongst those will a spell of acclimatisation, but for fanbase as a whole, there needs to more unity, whether they approve of the club hierarchy’s decisions or not.

It’s time to back the manager.