The Austrian has been at Bayern Munich since 2008, when the Bavarian giants plucked the 16-year-old from Austria Wien’s youth team, and began to break into the starting lineup in 2010/11 a

Somehow he’s still only 27, and still has (theoretically) a few years of peak remaining. So, which club should he join to spend those final, golden years of his already glittering career? ​Arsenal have shown some improvements under Mikel Arteta, to the point that only Liverpool and Manchester United have conceded fewer league goals than the Gunners since the Spaniard swapped the Etihad for the Emirates.

However…that’s a flattering reflection of their defensive ability, given they are significantly over-performing their expected goals numbers. To put that another way, the quality of chances they have conceded since Arteta arrived suggest they have a defence closer to mid-table mediocrity than Champions League standard.

Arteta seems to be attempting to recreate some of the tactics used by his former mentor Pep Guardiola, a coach Alaba thrived under while the pair were together at ​Bayern Munich.

Would he fit? Definitely. The Austrian would be more than comfortable in the left-back role in which Bukayo Saka has deputised well, and has already shown he can tuck into midfield while Arsenal have possession, something Arteta has been asking right-back Hector Bellerin to do.

Should he join? Absolutely not. Arsenal, for all the goodwill Arteta’s arrival has brought, are a mess and probably won’t make the Champions League this season. Alaba is a player who should be lighting up the latter stages of Europe’s biggest competition, not bemoaning a fightback from Olympiacos in the Europa League, even if he ​supported Arsenal as a youngster. Also…where’s the money coming from? Chelsea have looked electric at time under Frank Lampard’s leadership this season, with their last outing – a 4-0 demolition of Everton – possibly their best performance of the campaign.

Their worst performance came when Alaba lined up against them at Stamford Bridge. Bayern tore Chelsea to shreds in a ​3-0 mauling, with the Austrian a calming figure in central defence – a role he has been forced into due to other players’ injuries, but has nevertheless excelled in.

​Chelsea have tended to favour a four-man defence this season, which has given Lampard some selection headaches at left-back. César Azpilicueta has reliably filled in there but the two natural options at Chelsea’s disposal – Emerson and Marcos Alonso – seem to have been unable to convince their manager of their defensive solidity (a sensible conclusion).

Would he fit? Alaba would neatly slot into that left-back role, bringing some balance back to that flank as he is adept at both ends of the pitch.

Should he join? Probably not. While Chelsea look as though they will secure a berth in next season’s Champions League, whenever that may be, it’s unlikely that this side (with the core of the team still a couple of years away from peaking) will challenge for major honours. This is where things get interesting. Real Madrid are unquestionably a ‘super’ club and will be competing at the level Alaba has become accustomed to at Bayern Munich.

After an incredibly disappointing 2018/19 campaign in which Madrid struggled to adjust to life without ​Cristiano Ronaldo (which wasn’t helped by their unwillingness to sign a replacement – why would you? It’s not as if he scored 40 goals in eight consecutive seaso—oh wait), Zinedine Zidane took the approach of tightening up their defence in the absence of an abundance of goals.

The 24-year-old Frenchman Ferland Mendy has impressed enough to displace Marcelo at left-back this year and the central defensive partnership of Sergio Ramos and Raphaël Varane looks hard to penetrate – by opponents or Madrid’s substitutes.

Would he fit? Even if Alaba is an upgrade on Mendy at full-back or a younger alternative for Ramos, it is highly unlikely Madrid would even give him the opportunity to try an unseat either.

Should he join? In short, no. The German publication ​SportBild suggested that Alaba consider Los Blancos an attractive option but there are other top clubs where he would be first choice. 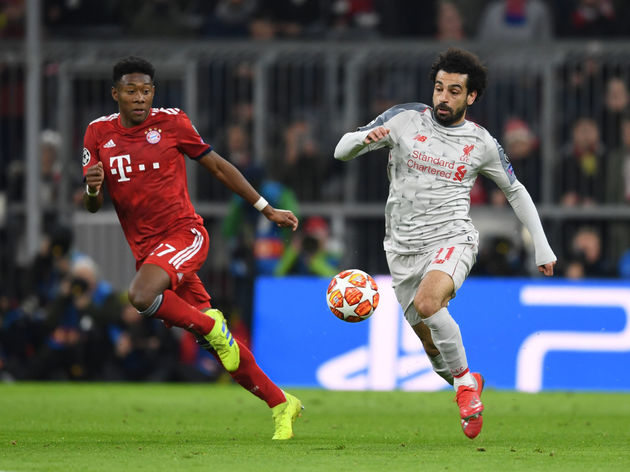 Liverpool’s rise to the summit of the Premier League under Jürgen Klopp hasn’t been driven by extravagant spending but by smart, thoughtful purchases.

The fee to prise the 27-year-old out of Bayern Munich would likely top their record transfer of £75m for Virgil van Dijk. Given Andy Robertson’s left-back slot is near untouchable, the argument can be made that Alaba might be an upgrade on Joe Gomez at centre-back, but the partnership the Englishman (five years his junior) and Van Dijk have formed in the second half of the season is formidable.

Would he fit? Alaba could slot into the defensive midfield role in which Fabinho struggled since returning from injury, but Liverpool are very strong in the positions which…well, they’re strong in all positions.

Should he join? If he has the opportunity to join this Liverpool side, it would be hard to turn down a team who – prior to the suspension of play – have been breaking almost every record there is. The question would be about game time. ​Barcelona are at an ​interesting point in their history. They’ve won eight of the last ten domestic trophies on offer (four La Liga titles and four Spanish Cups), but have been humiliated by Champions League remontadas from Roma and Liverpool in the last two seasons.

Manager Quique Setién favours a slow, deliberate passing buildup, with Barça’s centre-backs responsible for collecting the ball very deep in their own area and progressing the play through the thirds.

The current options for the left-sided centre-back Samuel Umtiti and Clément Lenglet both have had their issues in Catalunya. Umtiti has struggled with injury for some time and looks like he could leave, while Lenglet never fills fans with confidence when he sheepishly receives the ball in his own area.

Would he fit? Alaba has shown the ability on the ball in central defence to suggest he would fit pretty seamlessly into this Barça side, and could certainly fill in at left-back in place of the ageing Jordi Alba.

Should he join? He would be arriving at a club which has had to fend off claims of ​hiring firms to attack their star players on social media, but despite the off-field turmoil, Barça do possess some extremely talented players with Frenkie de Jong and Ansu Fati among their ranks. And of course, how can anyone turn down the chance to play with Lionel Messi? Alaba missed a big chunk of Guardiola’s second season at Bayern through injury (and, by the way, injuries have been a problem throughout his career) but excelled under the Spaniard as ​Manchester City’s current manager fully exploited the Austrian’s versatility.

This season, Guardiola’s City have somewhat returned back to the realms of

This propensity to leave the back door open almost certainly is related to the removal of ​Fernandinho from that defensive midfield role, in which he thrived as the side’s chief stopper of counter attacks, doing his best Gandalf impression (except bald).

With Aymeric Laporte at left centre-back the only nailed-on starter in City’s defence, Alaba could find himself in midfield to help Rodri stop the tide in transition. Prediting where Guardiola will play anyone, let alone someone as versatile as Alaba, is never simple though – and the Austrian does look a natural fit for the left-back slot which has troubled City since the Spaniard’s arrival.

Would he fit? Yes. He’s already thrived under Guardiola at Bayern and would be an incredible addition to this already star-studded City line-up.

Should he join? Yes. The only thing going against City is their impending Champions League ban, but if any manager can convince Alaba to come in the absence of European football, it’s Guardiola.