​Arsenal visit Turf Moor to face Burnley on the final day of the 2018/19 season, needing a miracle to qualify for the Champions League via fourth place.

The Gunners need an eight goal swing for them to overtake Tottenham, who face Everton at home at the same time. If Arsenal don’t make it into Europe’s top competition through their league position though – as seems overwhelmingly likely – they have another chance at qualification in the Europa League final on 29th May.

Currently 15th, a win could see them finish just one position higher. While that’s not as lofty as last season’s peak, it’s a vast improvement on the relegation spot they found themselves in just a couple of months ago.

Phil Bardsley and ​Peter Crouch could come into contention ​after missing the last five games with injuries. Rob Holding, Hector Bellerin, ​Aaron Ramsey, Denis Suarez and Danny Welbeck remain on the sidelines for Unai Emery’s team while after Thursday’s win in Valencia, Emery may rotate his players – with Bernd Leno, ​Henrikh Mkhitaryan, Alex Iwobi, Matteo Guendouzi all in with a chance of making the starting XI.

One player who will want to start is ​Pierre-Emerick Aubameyang, who is chasing the ​Premier League Golden Boot – needing either a hat-trick or two goals and three assists to have a chance of passing Liverpool’s Mohamed Salah.

The Clarets have lost their last nine games against Arsenal, including a 3-1 defeat at the Emirates in the reverse fixture last December.

The last time they took points from this game was in 2009, when Graham Alexander equalised from the penalty spot after Cesc Fabregas had given Arsenal the lead. 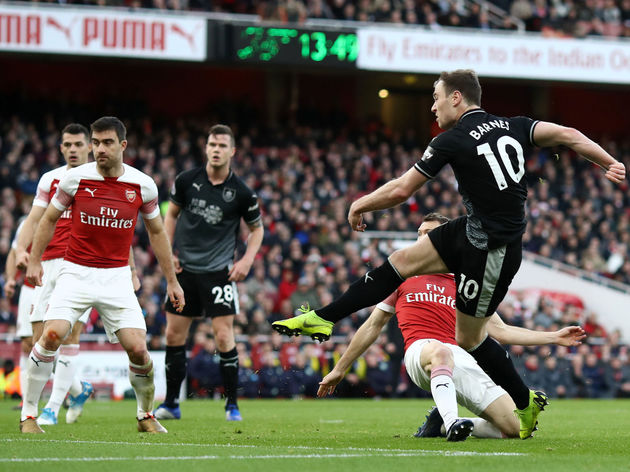 A victory in the League Cup a year later was the last time they beat Arsenal in any competition, and 1973 was their last triumph in the league. That’s a long time ago.

Burnley’s form has been all over the place of late; winning two of their last five, but losing their last two, with a credible draw at Stamford Bridge sandwiched between the wins and defeats.

They played well in defeat during the loss in their last home match against Manchester City, Here’s how each side has fared in their last five matches.

Burnley have a poor record against Arsenal but – if they were going to turn that around – Sunday would be the time to do it. Considering the Gunners’ recent away form in the league and the Europa League final on the horizon, the Clarets have a great chances of beating Arsenal for the first time in a decade.