The Gunners are hopeful of wrapping up the signing of the in-demand Chile star ahead of Liverpool, Manchester United and Juventus, with further talks scheduled over the coming days

Barcelona have accepted a bid of €40 million from Arsenal for Alexis Sanchez, Goal understands.

The Gunners will now try to wrap up the transfer of the in-demand forward with further talks in the next 48 hours aimed at convincing the player to choose a move to Emirates Stadium ahead of his other suitors.

Sources have told Goal that the financial package offered to Alexis has been agreed in principle by the player and his representatives.

Arsenal will attempt to clinch the signing by obtaining an official agreement from the Chile World Cup star, with the possibility growing that a deal could be finalised in the coming week.

The indications from the player’s camp during negotiations are that he wants to move to Arsenal ahead of Manchester United, Liverpool and Juventus, who have all tabled offers to the Chilean. 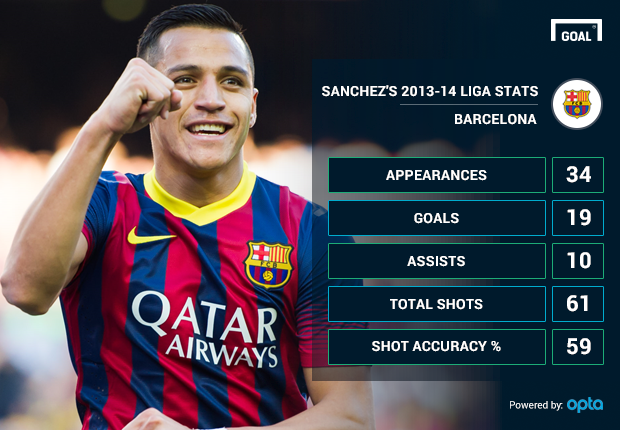 The timing of the deal could depend upon Barcelona’s pursuit of Luis Suarez, with the Catalan club unlikely to formally sanction for the 25-year-old departure until they have finalised the signing of the Liverpool forward, who is set to cost just over €88m.

As revealed earlier in the week, the north Londoners’ bid €40m for the former Udinese star after Arsene Wenger made him his priority forward target this summer.

Barcelona have accepted the offer, which matches their valuation, and agreed the structure of payments proposed by Arsenal.

Wenger has been busy attempting to convince Alexis, whose World Cup ended a week ago when Chile were eliminated on penalties by Brazil, that he should choose Arsenal ahead of the rival clubs competing for his signature.

Barca’s sporting director Andoni Zubizarreta admitted last Tuesday that the Spanish giants are willing to cash in on the 25-year-old, who has been hotly pursued after a series of outstanding World Cup displays and a season in which his 21 goals were bettered at his club only by Lionel Messi.

It was reported in May that Arsenal had sent a delegation to Madrid to hold talks with a mystery forward, who is understood to have been Alexis.

Wenger and his scouts believe the forward has the attributes to be developed into a centre-forward at Emirates Stadium.

The Gunners’ top priority this summer is to clinch the signing of an elite forward who can provide competition next season for Olivier Giroud, the only senior striker at the club.