Lacazette’s Arsenal contract expires at the end of the season and he is free to speak to clubs outside England about a pre-contract agreement.

Aulas, speaking at the unveiling of new loan signing from Tottenham – Tanguy Ndombele – also admitted they are looking into the return of Karim Benzema from Real Madrid in the summer too.

“It’s Lacazette, he interests us because he marked this club,” Aulas said.

“It’s a profile that interests us and we have always been in contact with him.

“This is part of the guiding ideas brought by (new sporting director) Bruno Cheyrou. In our context, yes it (Lacazette) is more accessible than Benzema.

“We have to try to see if we can do it as a free player but we will not be alone.”

Lacazette signed for Arsenal in a £47m deal from Lyon back in 2017.

Pierre-Emerick Aubameyang wants to lead Barcelona into the Champions League after officially joining the Spanish side on a three-and-a-half-year deal.

Barcelona finally confirmed the signing of Aubameyang on Wednesday, despite the 32-year-old having trained with his new team-mates on Tuesday after agreeing a dramatic Deadline Day move to Spain from Arsenal.

The La Liga side have revealed he has an option to agree his departure on June 30, 2023, with an £83.4m release clause in his contract. Speaking in an interview on Barcelona’s official Twitter feed, Aubameyang made it clear what his aims were, having signed a deal until 2025.

“I’m very proud, especially because my family is Spanish from my mother’s side,” he said. “I’m really proud and happy to be here. My main goal is to help the team and give everything I can to bring the team back into the Champions League and stuff like that.

“I’m just happy to be here and I will try to give everything. It’s amazing to have him (Xavi) as a coach, he’s been a fantastic player as everyone knows and I’m sure as a coach he will bring us something that we will learn.” 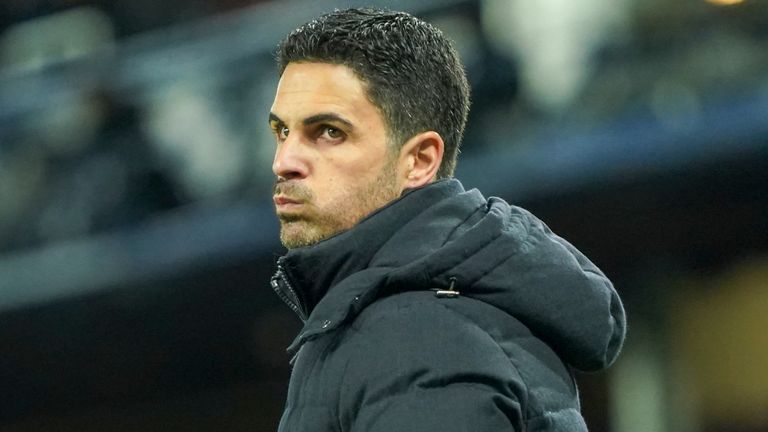 Kevin Campbell says Arsenal are playing ‘Russian roulette’ by not bringing in a new striker to replace Pierre Emerick-Aubameyang who moved to Barcelona.

Aubameyang leaves Arsenal after four years at the club, having joined from Borussia Dortmund in January 2018 for a then club-record £60m fee.