Arsenal got their season up and running by coasting to victory in their second-round Carabao Cup tie at West Brom – with Pierre-Emerick Aubameyang hitting a hat-trick on his return to the side.

With pressure building on manager Mikel Arteta already after two defeats at the start of the new Premier League campaign, there was welcome relief as the Gunners smashed their hosts 6-0, setting up a third-round tie against League One side AFC Wimbledon.

Aubameyang had been struck down by Covid on the eve of the new season, missing the loss at Brentford and coming off the bench in the defeat to Chelsea.

He will not have scored many easier goals than the first-half double he grabbed here before adding a fine third for the match ball as Nicolas Pepe, Bukayo Saka and Alexandre Lacazette also found the back of the net.

Saka was lively and Martin Odegaard impressed on his second debut for the club following his permanent switch from Real Madrid last week – but Arteta and his side will not be judged on such tests as this.

While the Arsenal starting XI boasted 348 senior international caps and three national captains in Aubameyang, Odegaard and Granit Xhaka – West Brom made 11 changes from their win at Blackburn, handing out five debuts with an average age of under 23.

Aaron Ramsdale made his Arsenal debut in goal and got off to a shaky start with his feet in front of an unfamiliar back four, which included Sead Kolasinac at centre-back.

He did, however, make a smart low save to keep out Tom Fellows’ low strike as the hosts started well – only to fall behind on 17 minutes.

Saka’s smart feet saw him evade a number of challenges before his low shot was pushed out into the feet of Aubameyang, who tucked home from close-range for Arsenal’s first goal of the campaign.

Odegaard should have marked his second debut with a goal but hit the post from a tight angle with the goal gaping.

The tie was wrapped up as Arsenal scored two in quick succession on the stroke of half-time.

First, Aubameyang doubled his tally for the night as he tapped home after Pepe hit the post following a fine Mohamed Elneny pass.

Then he turned provider, seeing his own shot saved before his acrobatic shot fell to Pepe who slid in to finish.

Saka got his name on the scoresheet soon after the restart, finishing with aplomb following a fine flick from Odegaard.

Lacazette opened his account for the season just four minutes into his first appearance, tucking home at the front post as Pepe claimed another assist.

That was the end of the rout as Arteta enjoyed a fine evening all round ahead of Saturday’s trip to reigning Premier League champions and Carabao Cup holders Manchester City. 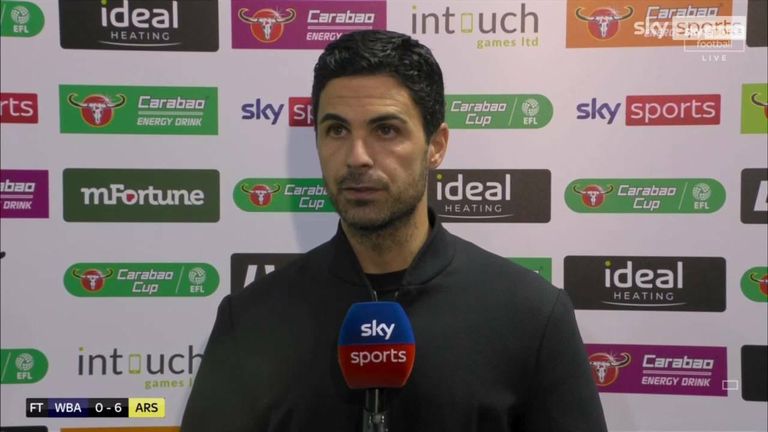 Mikel Arteta praises the ‘togetherness’ of the squad following their 6-0 win against West Brom.

“It’s always a tough place to come here midweek. They made some changes to to keep the clean sheet and with the attitude the team had, overall I’m very happy. We’re really disappointed we haven’t won yet in the Premier League, but the players are together.

“When you lose the most important thing is to win the next match as quickly as possible, score some good goals and get some confidence, and get a clean sheet. There were players that needed goals and minutes, so in general it was a very positive night.

“Aubameyang looked sharp. Physically he’s not at his best but he looked good tonight. He can play outside, inside. It depends on the plan of the game and who we have available. Martin gives us something different and Ramsdale looked very comfortable.”

Man of the Match – Pierre-Emerick Aubameyang 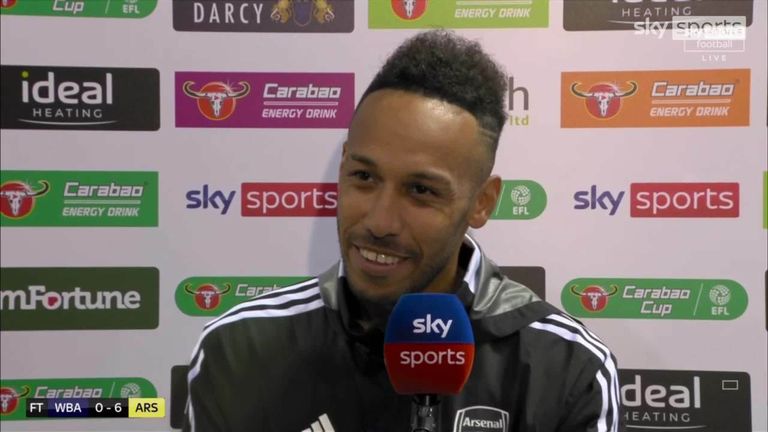 Pierre-Emerick Aubameyang explains what it means to get an important win for Arsenal ahead of a shaky start to the season.

“He benefitted from some poor defending but he took his chances. Arsenal are transformed as an attacking force when he plays. Four shots, three goals. It was a clinical performance.”

Arsenal head to Manchester City in Saturday’s lunchtime kick-off in the Premier League. West Brom head to Peterborough in an 8pm kick-off the same day, live on Sky Sports Football.