Gabriel Martinelli’s willingness to take risks has been praised by Arsenal manager Mikel Arteta, who believes the in-form forward is developing into a well-rounded player.

Three goals in his last two appearances – against West Ham and Leeds – saw the 20-year-old Brazilian catch the eye as Arsenal moved into the Premier League top four.

His contributions also took some of the focus off former captain Pierre-Emerick Aubameyang’s continued omission because of a disciplinary breach.

FREE TO WATCH: Highlights from Arsenal’s win at Leeds in the Premier League

“He (Martinelli) trains incredibly hard, he is always willing to do more and he is not scared or afraid to take risks – and that is what I like about him,” Arteta said of Martinelli, who has scored four times in his last six league games.

“You cannot play every action at 100mph, it is impossible. It is not very efficient for you because you burn yourself out after a few minutes, and then you’re just chasing a situation and not reading exactly what is needed.

“Gabi is doing much better at that. We have to try to do that without losing the passion, the energy and this capacity he has to just affect the game with the way he acts on the pitch.”

Arteta also praised Martinelli’s willingness to press and chase down loose balls, and his ability to play on the shoulder of the defence before using his pace to get in behind the opposition.

“Every time the ball is 50/50 he is going to chase it and he’s going to use his body, his speed, his technical ability to get away from you and you have to be careful, because he can attack you one v one, he can attack your back, he can make movements off the ball. He is a real threat in front of goal,” Arteta added.

Mikel Arteta reflected with pride on Arsenal’s progress on the second anniversary of his appointment as the club’s manager.

The 39-year-old, who was named as the permanent replacement for Unai Emery on December 20, 2019, believes Arsenal can continue to look to the future with excitement.

Overcoming a difficult start to the season, Arteta has guided Arsenal into the Premier League top four following a run of three consecutive wins – 3-0 vs Southampton, 2-0 against West Ham and a 4-1 success away to Leeds. 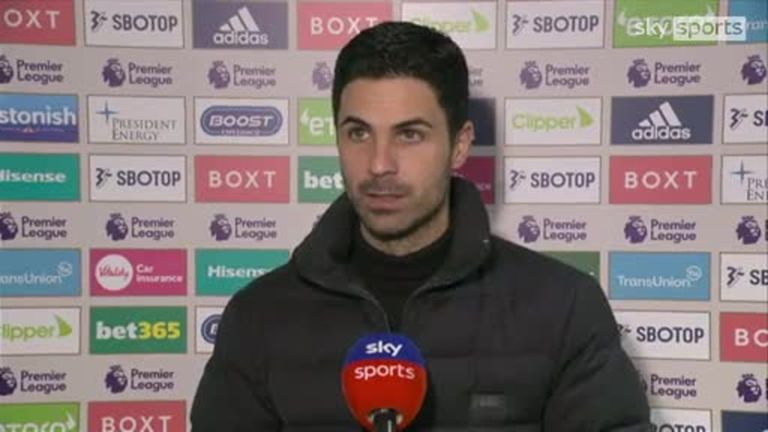 “It’s been an incredible journey and I am really happy and proud with the company that I have had on the journey,” Arteta said.

“I would say we have been through different phases throughout those two years. A phase where straightaway we had to pick up results and try to turn around the situation we were in.

“Then we had the two trophies, which was a big lift and great memories, apart from not having the people, our supporters with us to enjoy that one.

“Then a year where we had everything: we had Covid, we had so many changes around the club from top to bottom and a really difficult one to manage, with some difficult moments and then finishing the season in a really strong way.

“Now it is a new phase where we start to rebuild the team, we take a very clear direction with how we want to move forward with the club, a real connection between the team and supporters, the ownership and board and I think now it is excitement.

“Excitement to keep driving this project forward, to keep working with this really young squad, but ready to compete, to get better and take the club back to where it belongs.”

“Martinelli is a very special talent. I like him, but the question is: how long is he going to be fit for? If he can maintain his fitness, Arsenal have got a new signing – a £50m player.

“On top of that there’s Bukayo Saka and Emile Smith Rowe, Martin Odegaard is starting to look like the decent player he was meant to be when he arrived at Arsenal, Thomas Partey is starting to play now.

“Arsenal are starting to look decent but, as I say, they are still a bag of Revels, you put your hand in and you’re never sure what you’re going to get!

“They got beat at Old Trafford and Goodison Park, Manchester United and Everton didn’t play well those two games, they weren’t, they just beat Arsenal. The problem with Arsenal is consistency, that has been their problem for the last 10 years.

“They will put in some good performances, we’ve just seen that against Southampton, West Ham and Leeds, and they have a chance of finishing in the top four because they are not in Europe and play just once a week.

“Arsenal do deserve credit for being in the mix, as long as they carry on beating the teams beneath them they have a chance. If they lose against any of the big three it won’t make a difference because none of the other teams vying for fourth will beat the big three.”

Johnson: I have utmost respect for Arteta

Sunderland boss Lee Johnson has admitted he would use his “dad banter” against him if he were Mikel Arteta.

Johnson takes his League One side to Arteta’s Arsenal in the Carabao Cup quarter-final on Tuesday having unwittingly incurred the wrath of a section of the Gunners fanbase with a tongue-in-cheek suggestion that he would be happy to face the North London club in the last eight.

Asked if the Spaniard could use his words against him, the Black Cats head coach said: “Listen, that’s my mistake if he did. I would use it – why wouldn’t you? Whether or not he sees that as a big enough motivation…

“All I can say is I have the utmost respect for players, staff and the football club.”

Johnson found himself in hot water with Arsenal fans when, after being asked for his preference ahead of the draw, he said: “I’d love to have Arsenal away, or Tottenham away if not that. And then we’ll wait for the really big guns when it’s two legs.”

Asked if he regretted his remarks, he said: “I regret if it offended anybody because genuinely, anybody that knows me and probably watched the clip will know that it was tongue-in-cheek dad banter.

“I can assure you I’ve got 100 per cent full respect because the first part of the question was a genuine answer in terms of they are the two clubs that I actually wanted to play because I haven’t played there and I haven’t managed there.”