The Arsenal captain has not scored in his last five Premier League outings and has only scored four top-flight goals so far this season.

Further questions marks were raised that things may not be quite right when the striker was substituted during the midweek defeat to Manchester United as the Gunners searched for an equaliser.

However, Arsenal boss Arteta was quick to set the record straight, claiming the decision was for tactical reasons and did not point to any underlying issue with the player.

“We made a decision to get the best out of the team and I believe in that moment it was the right call to get some fresh legs on,” Arteta said.

“He worked really hard and we were chasing the game and that was the decision.

“The way he trains and the way he’s behaving he doesn’t look any different to me. We need his goals and his performances and we know he is part of our success.”

He added: “Of course, you’re always concerned when your main striker doesn’t score goals but he’s trying his hardest and he’s aware of how much we need him to score goals.

“At the moment they are not coming but everything else we ask him to do, he is doing his best.

With Arsenal scoring 17 goals from the opening 14 Premier League games, Arteta was also asked whether he would make a move in the January transfer window.

Speaking ahead of Monday night’s game at Everton, live on Sky Sports, Arteta said: “We have to focus on the players we have and try to make them better and just take more of the chances than what we are doing.” 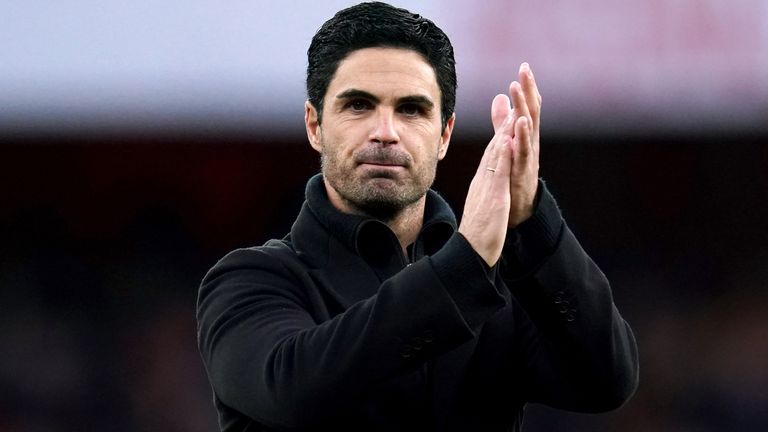 Arsenal manager Mikel Arteta is looking forward to facing Everton in Monday’s Premier League match at Goodison Park, a ground he described as a ‘special place’

Pierre-Emerick Aubameyang’s form has once again come into question, with the Arsenal captain on a run of five Premier League games without a goal ahead of his side’s trip to Everton on Monday Night Football.

Aubameyang has had a torrid time in front of goal in recent weeks. His miss against Newcastle was labelled “unforgiveable” by former Gunners striker Ian Wright, while Arsenal’s record goalscorer Thierry Henry suggested something was not right after the 32-year-old was substituted by Mikel Arteta with his side needing an equaliser in the final 11 minutes of their 3-2 defeat to Manchester United.

“Aubameyang is your captain. He is your goal scorer,” Henry told Amazon Prime Sport after the game.

“You put him as your captain. 15 minutes to go, you’re losing 3-2 and you take him off. 3-2 away from home, you need a goal and you take your captain, your symbol, off the field. You know he can score goals so something is not right there.”

So, what is up with Aubameyang and should Arteta stick with him for the trip to Everton, which is live on Monday Night Football? Sky Sports football features writer Nick Wright spoke to the Essential Football Podcast to discuss Aubameyang’s form and his recent struggles in front of goal…