It’s fair to say that Arsenal will end this decade in a worse position than when they started it back in 2010.

The Gunners experienced a slow decline under Arsene Wenger that got rapidly worse under Unai Emery, and they’ll be hoping new manager Mikel Arteta can be the man to turn it around.

There were some highlights though as they picked up three FA Cups in four years, not to mention the three Community Shields that came along with them (they are major trophies, OK! Just ask Jose Mourinho).

Throughout the good times and the bad fans got to witness some incredible talent grace the pitch at the Emirates Stadium, so join us as we take a trip down memory lane and pick Arsenal’s team of the decade. Wojciech Szczesny (GK) – Sczcesny was just 20 when he broke into the first team in 2010, and just 24 when he won the Golden Glove. The name Manuel Almunia is enough to give most Gooners shudders, so the Pole will be remembered fondly for ending a long line of horrendous ​Arsenal keepers. Just don’t mention the 2011 Carling Cup final…

Bacary Sagna (RB) – A solid defender with a penchant for scoring important goals against ​Tottenham, Sagna will be remembered fondly by Arsenal fans. For a man of only 5’7 he was phenomenal in the air and consistent throughout his time at the club. Sadly, like many on this list, he was allowed to run down his contract and leave on a free, souring the memories slightly.

Per Mertesacker (CB) – When Mertesacker joined Arsenal on deadline day in 2011 straight after the 8-2 defeat to Manchester United, it genuinely seemed like the club was going to implode. But ‘the BFG’ helped turn things around with a calming presence at the back. The 2017 FA Cup final against ​Chelsea is probably his personal highlight.

Laurent Koscielny (CB) – Koscielny may have damaged his reputation by forcing a move to Bordeaux in the summer before appearing in that video, but he was a great centre back. He popped up with important goals too, netting the equaliser against Hull in the 2014 FA Cup win and twice scoring winners that secured Champions League football for the Gunners.

Nacho Monreal (LB) – Probably Arsenal’s most consistent player of the decade, Peter Crouch’s Spanish cousin was never less than a seven out of ten for the Gunners. Equally comfortable in a back four or a back three, Monreal proved to be a bargain signing from Malaga back in 2013. Most Arsenal fans would’ve been sad to see him go this summer. Aaron Ramsey (CM) – ​Ramsey started the decade with a horrific leg break at ​Stoke and came back to end it as an Arsenal legend. The Welshman popped up with not one but two FA Cup final winners, and was a consistent goal threat from

Santi Cazorla (CM) – Of all the talented midfielders to have graced the Emirates pitch, Cazorla is the one who stands out. The little Spaniard was a magician with the ball at his feet and his man of the match performance against Manchester City will never be forgotten. His Arsenal career ended tragically through injury, but his comeback since has been one of football’s feel-good stories.

Mesut Ozil (CAM) – ​Ozil is probably one of the most frustrating players Arsenal have had over the last decades, but he’s also up there as one of the best. Managerial clashes have plagued his last few seasons but Ozil is still a phenomenal creative outlet who has managed an assist nearly every three games in his time at the Gunners. 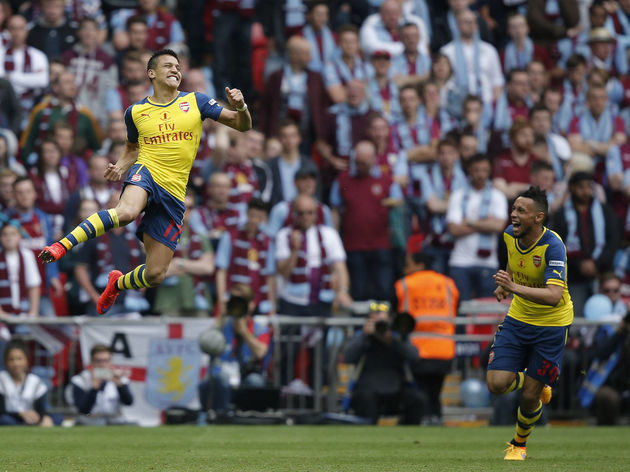 Alexis Sanchez (RW) – The Chilean may have left in unceremonious circumstances, but in his time at the Emirates he was simply unstoppable. 60 goals in 122 Premier League games shows just how prolific he was, and his rocket in the 2015 FA Cup final will go down as one of the great Wembley goals.

Robin van Persie (ST)- Robin van Persie leaving to join rivals Manchester United back in 2012 was probably the most painful of all high profile departures. The reason it hurt so much was because of how good he was. The Dutchman managed 30 goals in a side with Gervinho and Andre Santos in it. Hurts to say it, but he was world class.

Pierre-Emerick Aubameyang (LW) – Despite only joining in 2018, ​Aubameyang comfortably makes this list. The Gabonese forward has netted 50 goals in just 78 games for the Gunners – faster than Thierry Henry – and won the Golden Boot in his first full Premier League. Without him Arsenal would genuinely be in a relegation scrap this season.