Sure, Pascal Cygan would have walked into that Milan side for the early nineties but did he play at Highbury long enough?

Nicolas Bendtner was/is a global icon but did he do it on a wet and windy night in Stoke?

Luckily enough, this list isn’t up to you. It’s up to the objective folk here at 90min.

Even better, there’s plenty of choices. Arsenal Football Club have had quite a few good players and they’ve won quite a lot to boot.

So without further ado, let’s crack on. If God were designing a football player, after what the North Bank witnessed, Arsenal fans would probably say that Henry was the finished article. A relentless perfectionist, Bergkamp propelled Arsenal to their first Premier League title in 97/98. He won PFA Players’ Player of the Year and FWA Footballer of the Year as Arsenal won their second League and Cup double. An 11-year career at the club, an Invincible and a statue outside the ground. Pure poetry in motion. Liam Brady or ‘Chippy’ was a player that could have played in any era. Brady dribbled the football like a slaloming Olympic skier and was quite possibly the man for whom the term ‘wand of a left peg’ was coined.

A perfect technique that led to many brilliant strikes, his peach against Spurs gets played before every home game. His only trophy was the 1979 FA final cup against Manchester United, but his seven years in the famous red were not alongside other iconic names. Not only a club captain but a captain of England too, Adams became the torchbearer for English ‘heart’, figuratively ripping off Terry Butcher’s bloody headband and using it as his own armband. His thumping finish against Everton, sumptuously played through by Steve Bould of all people, is a moment all Arsenal fans won’t forget. Vieira was the bridge between the old Arsenal and the new Arsenal; ferocious in the tackle but a two-footed technical beast. If Henry and Bergkamp were too godly to comprehend, Vieira was more ‘the meat and two veg’. or ‘truffle and caviar’ if you will. He added a rudimental and necessary element to the side, but one of the highest order. 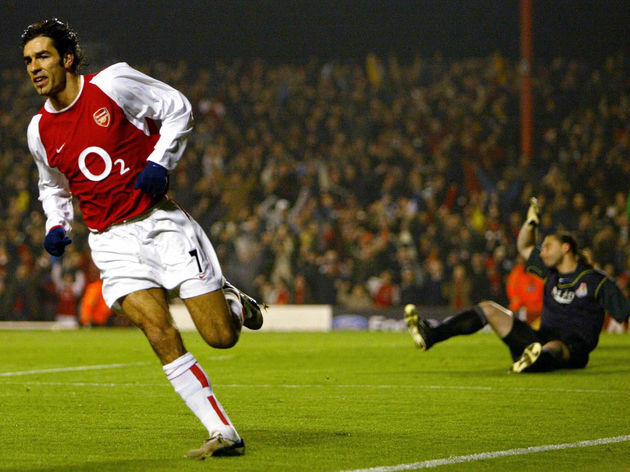 Robert Pires was so much more than a pencil goatee. His va-va-vooming created the most terrifying left flank in the history of English Football. With a rampaging Ashley Cole constantly overlapping and a drifting Thierry Henry, their interplay was frightening.

The 2001/02 season was his peak, winning the FWA Player of the Year while suffering a season-ending injury in March. His standout moment was against Aston Villa with a breathtaking lob. Boasting cat-like movement and a telepathic understanding of where the goal was, Wright brought goalscoring to a whole new meaning in north London. Imagine if he’d joined the club at 21 – how many he could have got?!

Wright’s charismatic smile, likeable personality, and passion for the club make him an Arsenal treasure that fans must protect at all costs. A local lad and an Arsenal fan, Charlie George became an Arsenal great with his exploits during the double-winning 1970/71 season. Back when the FA Cup was watched by the nation, George had his iconic moment in the final.

Drawing 1-1 in extra time, George received the ball from John Radford and smashed in a 20-yarder. While the goal was spectacular, it was the celebration that made it seminal, George lying flat on his back with his arms aloft. Cliff Bastin was the original prolific goalscorer, a crucial cog in the Arsenal side that dominated in the 1930s.

Herbert Chapman’s Arsenal won five League titles and two FA cups during an unprecedented spell of dominance. Bastin was a prodigy, by 19 he’d won a league title, FA Cup and been capped for England, making him the youngest player ever to achieve all three. Another crucial member of Chapman’s team, James blurred the lines between attack and defence, transitioning the ball to the lethal Bastin, Ted Drake, and David Jack.

The Scot was an assist machine and was vital in the record-setting season of 1933, where the Gooners managed 118 league goals.