Then again, you knew that when you agreed to take the Arsenal job. You also knew that one of your greatest priorities was to improve the club’s faltering defence.

More specifically, the centre-back position. Yes, there are several other areas of the squad that require some serious thought. But, as has been the case for longer than Arsenal fans would care to remember, there remains room for considerable change in terms of the club’s current central defensive options.

So, seeing as we’ve already analysed the ​five positions that the Gunners ought to address come the opening of the transfer window, laid out several ​central midfield and ​centre forward targets, it’s now time to take to look at our centre-back situation.

So, enough chit-chat. Here are 90min’s five centre-back options for Arteta’s Arsenal to analyse as credible options to sure up the centre of their defence. Starting with… So we said Arsenal still need to strengthen the centre of their defence. But wait! What about Pablo Marí – the handsome Spaniard who ​arrived on loan from Brazilian club Flamengo in January?

Well, he didn’t have much time to showcase his credentials. No sooner had he reached full match fitness and was impressing alongside David Luiz was the season paused.

And at that price, it looks as though Marí will be an enticing, economically sound proposition for the club’s hierarchy when they consider how best to strengthen the centre of Arteta’s defence. What is there to know about Evan N’Dicka? Here’s a couple basic ‘fun’ facts for you. He’s 20 years old, plays his football at Eintracht Frankfurt, represents France at Under-21 level, and he won the Bundesliga’s ‘Rookie of the Month’ award last year in recognition of his impressive performances as a player under the age of 23.

He’s hard enough to miss on account of standing 6ft 4in tall, but his breakthrough into Frankfurt’s first team has not gone unnoticed across Europe. The Gunners have been touted as a potential destination, but so have ​Liverpool.

In any case, he’s a highly promising prospect and Arsenal would do well to market themselves as an attractive destination for the young Frenchman, whose stock will only rise as time goes by. Yes, we know you’ve heard it before – ‘Arsenal are interested in signing Barcelona’s Samuel Umtiti’. It’s one of the more ​consistent transfer rumours of the past couple of years, but rumours of the Frenchman’s arrival at the Emirates continue to do the rounds. Therefore, we conclude there must be some truth to it.

It appears that Umtiti’s days at ​Barcelona are pretty much over. He’s suffered from countless injuries and fitness issues throughout his time at Camp Nou. But, he remains a talented central defender who has won a World Cup and is still just 26.

Then again, it’s likely that Barça’s valuation of the player will prove pivotal in Arsenal’s thinking. It’s recently been suggested the Catalans have lowered their asking price, so perhaps he may emerge a more realistic target than he was previously. One to keep an eye on… again. First, can we just appreciate how young ​Malick Thiaw looks in the above photo?! To be fair, he’s only 18, so you can hardly blame him.

Thiaw is Schalke 04’s very own 6ft 3in centre-half who, as a teenager, is a highly promising prospect. He may have only played once for Schalke’s first team, but his potential hasn’t gone unnoticed. He’s already being mooted as one of Jurgen Klopp’s future transfer targets.

It remains to be seen whether Thiaw opts for a change of scenery so early in his career. If he did, his profile would certainly meet Arsenal’s criteria for the promising young talents they will be scouring the market for. That is, before they become too expensive. 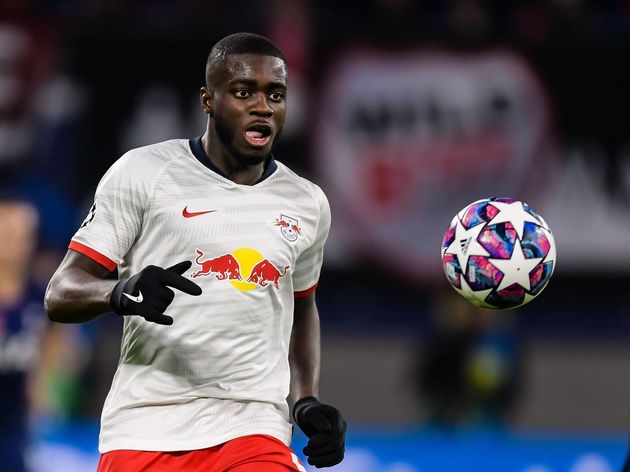 For most Arsenal fans, Dayot Upamecano is the ‘if we could sign one centre-back in an ideal world’ option. The club have been tracking the young Frenchman throughout his time at RB Leipzig, and would undoubtedly remain keen given the quality and consistency of his performances in recent months.

However, it looks as though (shockingly!) the Gunners aren’t the only club to be on the lookout for an exceptional centre-half. And, with ​both Manchester clubs keen, along with reported interest from Real Madrid and Barcelona, it looks as if the Upamecano ship might have sailed.

It is likely Leipzig would command a fee upwards of €60m. Who knows though, if Arteta decides Upamecano is the guy, then perhaps the club will find a creative way to make it happen. Perhaps being the crucial word there…