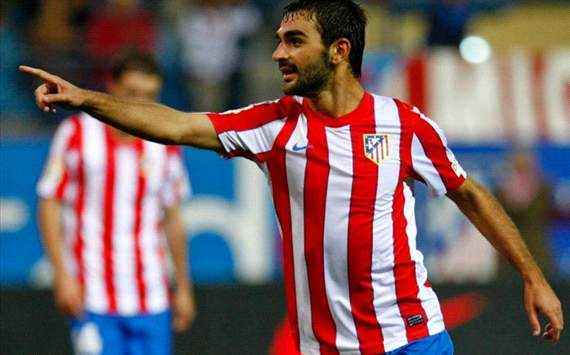 The Londoners have submitted a formal offer of around £10 million, which is lower than the £14.7m release clause in the forward’s contract.

Goal.com understands that Arsenal opened talks with Atletico to sign the 24-year-old Spain international before Christmas and have now made their move in an attempt to capture the player in the January window.

As revealed by Goal.com in October, Arsene Wenger has been closely pursuing Adrian, as he is known in his homeland, for months after failing to sign him last summer.

The Arsenal manager has set his sights firmly on Spain in the search for a centre-forward and has also made enquiries for David Villa and Fernando Llorente, who are out of favour at Barcelona and Athletic Bilbao respectively. While Wenger is continuing to closely monitor the experienced pair’s situations, the more youthful Adrian is currently his No.1 target to reinforce the club’s striking department.

Demba Ba, who is in talks with Chelsea, has also been on Wenger’s radar but the Frenchman has had misgivings about the prolific Newcastle United striker because of his chronic knee problems.

Despite Wenger’s recent mixed public messages about the possibility of a third Arsenal spell for Thierry Henry, it is understood that a six-week loan from New York Red Bulls for the club’s record scorer remains on the agenda.

However, Henry is regarded as cover for Gervinho, who will be on Africa Cup of Nations duty from the middle of January, and Wenger wants a permanent signing to challenge Olivier Giroud and Theo Walcott for a central striker role at the Emirates Stadium.

Arsenal have been encouraged in their pursuit of Adrian by the knowledge that he has a buy-out clause in his contract.

The Premier League club have initially stopped short of triggering it with their first offer, as they try to take advantage of Adrian’s diminished status in Diego Simeone’s title-challenging team.

Despite scoring for the Spanish national team this season, the forward has started just six of Atletico’s 17 La Liga matches, scoring two goals.

Nevertheless, Wenger has received excellent feedback from his scouts on Adrian, who has the versatility to play anywhere across the front three and has been hailed in some quarters as the new Villa.

He has a proven scoring record at age-group level for his club and Spain, won the Golden Boot at the 2011 European Under-21 Championship – scoring five goals for the tournament winners – and followed that up with 18 goals for Atletico last season.

Despite the likelihood that club team-mate Falcao, who has been blocking his path at Vicente Calderon, will join Chelsea either in January or in the summer, Adrian has failed to agree a new contract with the club and is keen to join the Gunners.