It’s been a 13-year wait for Arsenal to reach a European final, but after countless disappointments on the continent, Unai Emery’s side are now just 90 minutes away from being crowned Europa League champions.

The Gunners remain one of the biggest clubs on the planet to have never won Europe’s elite competition, but victory against Chelsea in Baku will once again give them a shot in the Champions League after two years out of the tournament.

While Arsenal don’t have the same European pedigree as some of their domestic rivals, they’ve consistently been a force to be reckoned with on the continent, having reached their first final almost 40 years ago.

Here’s a rundown of Arsenal’s history in the finals of UEFA club competitions ahead of their appearance in this season’s Europa League showpiece on 29 May. Back when the UEFA Super Cup was a two-legged affair, Arsenal found themselves up against Italian giants Milan – who had won the previous three Serie A titles – midway through the 1994/95 season.

The Gunners held Fabio Capello’s Rossoneri to a goalless draw at Highbury, with the only real talking point proving to be a yellow card from Milan’s Marco Simone, but the tables turned during the return leg at San Siro.

It had looked like Arsenal would go another 45 minutes without conceding against Milan, but Croatian midfielder Zvonimir Boban opened the scoring right on the stroke of half-time.

Daniele Massaro doubled their lead from a corner after the break, and Milan held out for the win against Arsenal in what proved to be manager George Graham’s penultimate game in charge in north London. Later that year, the reigning champions of the Cup Winners’ Cup – a game which features further down this list – found themselves in the final once again, this time facing Spanish side Real Zaragoza at Parc des Princes.

They’d only just edged past Sampdoria during the semi finals, but Stewart Houston – Graham’s former assistant – had set his team up to keep Real Zaragoza at a distance and it was a plan that was working wonders.

After struggling to break through Arsenal’s lines and surviving with some last-ditch defending at the other end of the pitch, striker Juan Esnáider was able to find a way past David Seaman with a stunning long-range effort.

But Arsenal hit back straight away, forcing the game to extra time thanks to a smart finish from John Hartson inside the penalty area, although things could have been different as Lee Dixon was fortunate not to give away a late penalty.

In extra-time goalkeeper Seaman proved once again why he was one of Arsenal’s best players to keep out Xavi Aguado’s header, but the former England international was left with egg on his face when former Tottenham midfielder Nayim’s 45-yard effort found its way into the back of the net in the 120th minute. It came as no surprise that Galatasaray poster boy Gheorghe Hagi was the danger man throughout their match against Arsenal during the UEFA Cup final in 2000, but it was actually striker Hakan Sükür

Martin Keown found himself in the right place at the right time when he was presented with a tap in from six yards out, but Arsenal’s legendary centre back blazed his effort over the crossbar, with it looking set in stone that only a penalty shootout would decide the match at the

Galatasaray had a perfect record from their four spot kicks, while it was Patrick Vieira’s powerful effort which crashed against the crossbar and eventually decided the final. Arsenal’s first European final, against Valencia some 12 years before the Premier League’s inception in England, was also decided by a penalty shootout.

But while the defeat at the hands of Galatasaray was as a result of a dismal showing from 12 yards, Arsenal’s loss in the Cup Winners’ Cup final in 1980 saw the highs and lows of a match being decided from the penalty spot.

It was Valencia who stepped up first, but Argentine striker Mario Kempes’ tame effort was easily kept out by Pat Jennings in between the sticks for Arsenal.

Liam Brady, however, couldn’t give Arsenal the advantage in Carlos Pereira.

The next nine penalties all found their way into the back of the net with Valencia in the driving seat in sudden death, but a nonchalant Graham Rix saw his shot kept out of the same corner as Brady’s earlier in the shootout, ensuring Arsenal’s first European cup final would end in defeat. 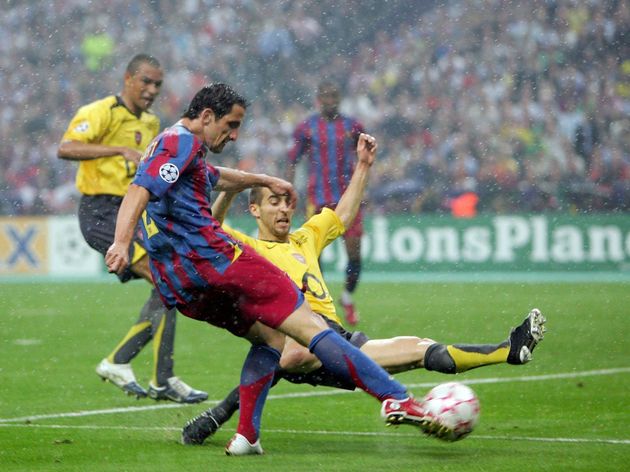 If there’s one game which still gives Arsenal fans nightmares, it’s their most recent European final in the Champions League against Barcelona.

Things didn’t start badly in the French capital as Thierry Henry came close to opening the scoring in the opening quarter of an hour, but it looked like the tables would turn when goalkeeper Jens Lehmann was sent off for a foul on Samuel Eto’o – forcing Robert Pires off in place for substitute Manuel Almunia.

Despite the red card, Arsenal actually got the opening goal thanks to Sol Campbell’s powerful header right on the stroke of half-time, sending the Gunners into an unlikely lead at the break.

They held their nerve for much of the second half but couldn’t find another breakaway goal, and Arsenal were made to pay for their missed chances when Eto’o squeezed the ball into the near post following some neat link-up play between 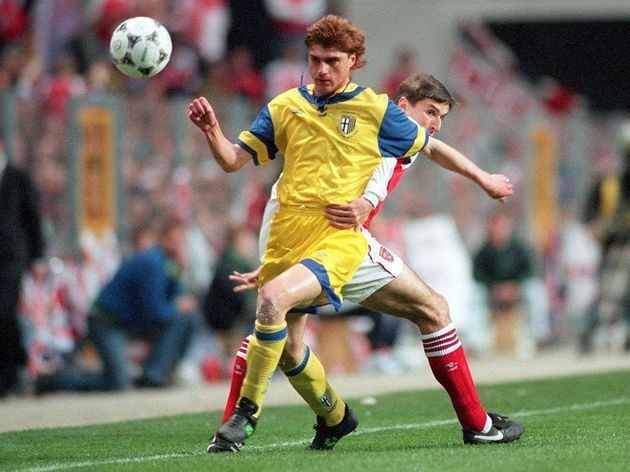 European finals haven’t always been a curse for Arsenal, and in 1994 they lifted their one and only major continental trophy against a star-studded Parma side in the Cup Winners’ Cup.

Some six years before their defeat to Galatasaray in George Graham’s Arsenal were under the cosh within seconds and needed a last-ditch tackle from Steve Bould to deny Parma’s Faustino Asprilla a chance inside the opening minute.

Tomas Brolin was able to get a right-footed shot past David Seaman moments later, but the Swedish striker was denied by the inside of the post.

Brolin’s miss proved to be costly for Parma, as Alan Smith found himself in yards of space on the edge of the penalty area to fire a venomous half-volley into Luca Bucci’s near post to break the deadlock.

Gianfranco Zola threatened to get Parma back on level terms and the Italian side did eventually have the ball in the back of the net with effectively the last kick of the game, but the goal was ruled out for offside and the Gunners held out for the remaining few seconds to win the Cup Winners’ Cup.