​Former Arsenal midfielder and current Under-23 coach Freddie Ljunberg has revealed that he thinks Eddie Nketiah should start in the absence of the suspended Alexandre Lacazette against BATE Borisov in the Europa League on Thursday.

The Gunners lost 1-0 in the first leg of their last-32 clash with the Belarusian side at the Borisov Arena, and will need to overcome the deficit if they are to progress to the latter stages of the competition.

However, manager Unai Emery faces a conundrum over who should partner top-scorer ​Pierre Emerick-Aubameyang up front following Lacazette’s straight red card in last week’s fixture, and may call upon Nketiah to make his first appearance for the club since the start of January. Having coached the 19-year-old this season in the Premier League 2 division, Ljunberg believes that the young forward is ready to make the step up to the first team if required.

Speaking to the ​Islington Gazette, the former Sweden international revealed: “If he [Nketiah] gets the call, he’s ready to play without question.

“It’s totally up to the manager [but] I’ve always thought we have players [at U23 level] who are ready to do well but it’s up to the first team.

“All I can do is advise and try to get the players as ready as possible. 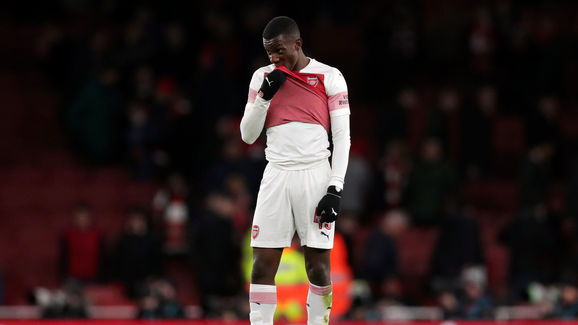 “It’s important for Eddie to play games. As a striker, you can’t just train because you want to feel that feeling to get yourself in the right place at the right time to score.

“That’s why I think it was important for Eddie to play [for the U23s] so he’s ready when he gets a chance with the first-team.”

Nketiah burst onto the scene last season by coming off the bench to score a brace in ​Arsenal’s 2-1 victory against Norwich City in the League Cup, but has since started just three games for the club, with the majority of his appearances being as a substitute.

However, with ​Lacazette unable to play on Thursday and striker Danny Welbeck sidelined with a serious ankle injury, the England Under-21 international may be given the opportunity to play a role in the Gunners’ Europa League clash.