The Gunners believe the Frenchman will snub their final £80,000-a-week offer and look to move to the likes of Manchester City or Chelsea in search of a bumper pay package

Senior Gunners officials had been given indications that Sagna would sign a two-year extension, with the option of a third year, last week.

However, a formal agreement failed to materialise and Arsenal believe one of their longest-serving players could be about to leave in search of one mega payday.

Manchester City and Chelsea are understood to be leading the race to capture the right-back, with both clubs ready to hand him the £100,000-a-week deal he is after.

Sagna also has offers on the table from Liverpool and a string of Continental clubs led by Paris Saint-Germain but is now expected to plump for the most sizeable Premier League deal. 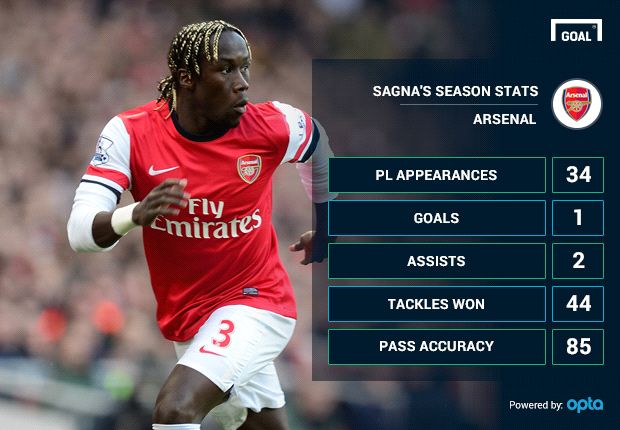 Losing Sagna would be a considerable blow for Arsenal, who made the Frenchman a take-it-or-leave-it offer worth more than £80,000-a-week at the end of April in a new attempt to keep him at the club.

It was an improvement on the £75,000-a-week deal already on the table, with both offers spread over two years with the option of a third year, and the Gunners hierarchy were hopeful that it would be enough for Sagna to snub other offers and commit to the club.

The right-back is believed to be settled with his family in London, but Arsenal have been reluctant to meet Sagna’s demands. They do not believe it fits within their salary model to pay a full-back £100,000-a-week, which would make him the second-best paid player at the club behind Mesut Ozil, who earns £130,000-a-week.

Arsene Wenger has been heavily involved in his fellow Frenchman’s contract talks despite failing to formalise his own two-year contract extension beyond this season.

Speaking recently of Sagna, be said: “We know what we want from him, he knows what is on the table and that’s where we are. The ball is not in our camp anymore. It is in his camp and he needs to come back to us.”

The defender, who turned 31 in February, is able to leave Emirates Stadium on a free in the summer and sign a pre-contract agreement with a new club.

Wenger has always been keen to hold onto Sagna, who has been a key figure for Arsenal this season and offers experience and versatility that would not be easy to replace.

The Gunners have looked closely at replacement right-backs in the last year, with Frankfurt’s Sebastian Jung and Toulouse’s Serge Aurier currently top of their target list should Sagna decide to leave.