In a repeat of last year’s last-16 match, Pep Guardiola brings die Roten back to the Emirates Stadium to face the Gunners, with our tipster backing an away win

Bayern Munich travel to London this evening to face Arsenal in a repeat of the two sides’ meeting at this stage of the Champions League last season.

The Bavarians are favourites to retain their trophy after victory against Borussia Dortmund at Wembley last season. With Bayern cruising in the Bundesliga this season and leading Bayer Leverkusen by 16 points, they can afford to put all their focus on the famous European competition. 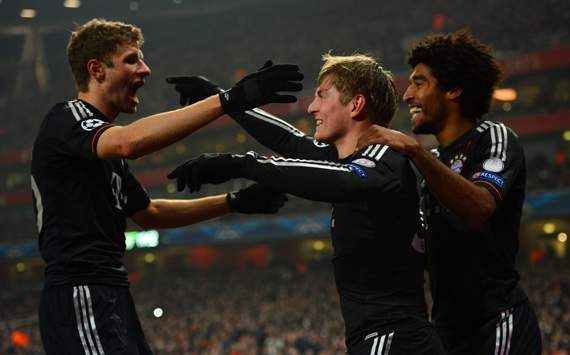 Pep Guardiola’s men are currently on a sensational run, winning 20 of their last 21 matches in competitive games. Manchester City were the last side to avoid defeat, winning 3-2 in Germany in a dead rubber match. Paddy Power price them at 4/5 (1.80) to take the win on Wednesday.

Arsenal battled through in the FA Cup this weekend, beating a spirited Liverpool side 2-1. It’s been a tough few weeks for Arsene Wenger’s side playing the likes of Liverpool twice and Manchester United, but they still remain in the hunt for the Premier League title and FA Cup.

After losing to Napoli in the last game of the group stages, they finished runners-up behind Dortmund, which left them vulnerable to the seeds in the last 16. Bayern stand in their way, with Paddy Power pricing them at 7/2 (4.50) to win the first leg. The same firm price the draw at 13/5 (3.60).

A bet that came to mind when looking at this game was goals for the visitors, with over 1.5 team goals paying out in their last 16 competitive games. However, the price of 8/13 (1.62) with Paddy Power doesn’t stand out.

Instead, the price on the visitors winning outright looks tough to ignore at 4/5 (1.80). Guardiola’s men are on a fantastic run recently, scoring for fun.

Bayern have scored 16 goals in their last four matches without conceding. Despite Arsenal looking like a better outfit than last year when they lost 3-1 at the Emirates, expect the German champions to have too much for them.