Well, there wasn’t a shortage of goals in this one, that’s for sure. Bang in the middle of the hectic festive period, Arsenal and Newcastle played out a proper Christmas cracker on 29 December 2013.

Generally, an away side scoring three times on their travels would suggest they’ve made a commendable fist of it. Especially if they come from behind on all three occasions, and it’s at the Emirates.

Unfortunately for the Magpies, this wasn’t a case of ‘generally’, and an inspired Theo Walcott produced a red-hot display. He scored an excellent hat-trick, laid on two assists and – quite rightly – was named man of the match. Walcott opened the scoring in a Thierry Henry-esque manner, opening his body up and sliding the ball past Tim Krul into the bottom corner. Demba Ba levelled the scoring as his 20-yard free-kick took a fortunate deflection.

1-1 going into the break, ​Alex Oxlade-Chamberlain then put the hosts ahead with a low drive from outside the box. The lead didn’t last long as Sylvain Marveaux equalised eight minutes later, but Lukas Podolski restored the one-goal advantage five minutes later.

Could the Gunners take control? Not yet. Ba hauled the Magpies level for the third time, but yet again it was a matter of minutes before Arsenal retook the lead. This time, Walcott lashed home his second, making it 4-3 with 20 minutes to go.

Alan Pardew’s side were now dead on their feet, and super-sub ​Olivier Giroud netted a quick-fire double to make it 6-3. Walcott had the final say as he completed his hat-trick with an audacious run and chip. It finished 7-3 to ​Arsenal, with eight goals coming in a crazy second half.

The pre-match buildup was dominated by one question: would Theo Walcott renew his contract? His deal was up in six months, and time was ticking.

The Gunners had seen several of their star men move onto pastures new in recent times, and had garnered an unfavourable reputation for failing to retain their best players. Simply put, the club couldn’t afford to let another of their prized assets go.

His match-winning performance only emphasised the necessity of tying the Englishman down to a new long-term deal. Well, this particular match went some way to progress negotiations – Walcott had put pen to paper within a month. Phew!

All eyes were on Walcott prior to kick-off, including an onlooking Thierry Henry, who was at the Emirates to witness what was to come. Well, the young man didn’t disappoint – he had a direct hand in five of his side’s seven goals. Not only did he open the scoring, he also netted the crucial goal to make it 4-3, and had the final say with his spectacular solo goal in injury time.

If the cries for him to extend his contract weren’t loud before – and they were – it’s safe to say they went through the roof after this remarkable performance. He can be forgiven for failing to anticipate that ​Newcastle would find themselves on the end of a 7-3 drubbing come full time.

It is rather unfortunate the Magpies scored three and came away with nothing to show for it. Did it matter they had equalised on all three occasions after they went behind? If you concede seven times, it’s unlikely there will be too many players who have performed particularly admirably.

But Newcastle performed courageously for the majority of the match, and managed to muster up three goals. It was Demba Ba who got on the scoresheet twice, and again, in normal circumstances, scoring a brace away at Arsenal would ordinarily be classed as an impressive feat.

Losing 7-3 slightly undermines any deserved recognition for individual performances, but Ba’s brace hauled his side back into the contest, and for that he was undoubtedly Newcastle’s top performer. 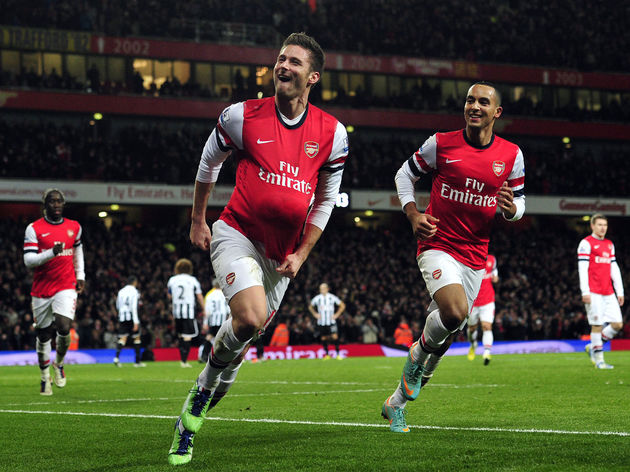 Olivier Giroud is now widely regarded as one of football’s most handsome men. If you compare then and now, there’s a notable difference-maker: he’s now got divine facial hair.

England duo Walcott and Oxlade-Chamberlain also sported somewhat of a ‘baby-faced’ look back then. Not to say they weren’t handsome lads, but these days both have certainly grown into their own as far as hairstyles and facial hair goes. Well done lads! It was common knowledge that Ba had an astoundingly low release clause in his contract. He was free to leave the club if any potential buyer met the required £7m.

Well, that’s what happened in January when ​Premier League rivals Chelsea swooped to secure what was, at the time, viewed as a bargain for an established international and top flight goalscorer.

Not to say it ended up Chelsea’s gain, but it was certainly, at the time, Newcastle’s loss. Gibbs had been Arsenal’s first choice left back for some time. He was pretty consistent for a decent period of time, but his career at the Emirates ran out of steam and he slowly fell down the pecking order after Nacho Monreal’s arrival.

Where is he now? Plying his trade in the Championship with West Brom. It’s strange to think he was considered one of the strongest contenders to take up Ashley Cole’s Arsenal and England mantle. It just never really happened. On the other side, we all remember how Pappis Cissé set the Premier League alight when he arrived in January 2012. He managed an astounding 13 goals in his first 14 appearances, helping to fire Newcastle to a fifth-place finish.

Understandably, he couldn’t quite maintain his inspired introduction to English football, and Cissé’s is a name that has since been forgotten. To be fair to him, he’s still banging them in for Turkish side Alanyaspor – he’s managed 25 in just 39 appearances.

Would an inspired result propel Arsenal onwards and upwards? Not really – they failed to win each of their following three fixtures. They drew 1-1 at St. Mary’s, then lost to Manchester City and Chelsea. Ah. Would Theo Walcott have scored a hat-trick without the prospect of a shiny new contract?

How high did Arsène Wenger’s heart rate go in the first 25 minutes of the second half?

How many Newcastle players sobbed themselves to sleep that night?